PSL on the US imperialism 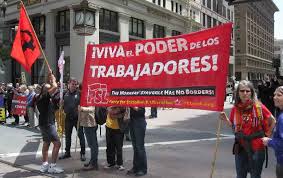 Special interview with Brian Becker, co-director of ANSWER Coalition and co-founder of the Party for Socialism and Liberation (PSL) (Part 3)

Last part of the special interview with Brian Becker, co-director of ANSWER Coalition and co-founder of the PSL on the US imperialism and its intervention and aggressiveness towards Venezuela.

ICP: Although the US administration had intensified its initiatives to overthrow the Bolivarian revolution in Venezuela, it could not achieve any remarkable success. How do you assess this failure and Venezuelan people’s victory? What are the reasons behind?

Brian Becker: The change in momentum in Venezuela since the July 30 election for the National Constituent Assembly (ANC) has been remarkable, and we salute the leadership of the Bolivarian Revolution for this feat. U.S. imperialism and its servants among the Venezuelan elite has been waging a brutal and multi-faceted campaign to overthrow the government of Nicolas Maduro. This includes direct sanctions by the United States and other imperialist governments, economic warfare aimed at creating scarcity and inflation, media demonization, and a vicious campaign of fascistic violence targeting supporters of the revolution and institutions associated with it.

In spite of all this, the Bolivarian Revolution has been able to seize the initiative by reenergizing its grassroots supporters with the Constituent Assembly. This broke the deadlock and dysfunction imposed by the opposition-controlled National Assembly. The overwhelming victory of the United Socialist Party-led forces in the regional elections is clear evidence of this. Of course, as the leaders of the revolutionary movement all say, there is much work that remains to be done. The bulk of the Venezuelan economy remains in the hands of the bourgeoisie, as a legacy of colonial underdevelopment the country still has a dependency on oil exports, the capitalist class retains a vast media apparatus to slander and distort the revolution and its leadership, counter-revolutionaries have the ability to openly organize.The ANC is a powerful tool to resolve these and many other dilemmas, and we will not waver in our support of the Bolivarian Revolution should it decide to move decisively against the forces that have proven time and again to have absolutely zero respect for the democratic will of the Venezuelan people.

ICP: Russia’s alleged intervention to the US elections has sparked heated debates and reactions even without any solid evidence. Considering that, how does the government’s agenda to intervene in Venezuela is perceived by the American public?

BB: Of course it is the height of absurdity for the U.S. government to complain about foreign interference in its elections. Unlike allegations of Russian intervention in the United States, U.S. intervention in Venezuela’s elections is real beyond a shadow of a doubt. Through “democracy promotion” programs administered by U.S. government entities like the National Endowment for Democracy, millions upon millions of dollars are funneled to the right-wing opposition. U.S.-owned media conglomerates spread misinformation aimed at eroding confidence in President Maduro and the other leaders of the government. U.S. sanctions and threats impede the ability of the Venezuelan people to freely determine the future of their country in an atmosphere of calm and peace.

The U.S. electoral system is terribly flawed, but not because of supposed Russian hacking. Tens of millions of people are legally disenfranchised because of their citizenship status or prior criminal convictions. The president of the United States is chosen by the electoral college, a relic from the era of slavery which on occasion overturns the popular vote (as was the case with Trump’s election). The Senate is among the least representative legislative bodies in the world. A complex of state and federal laws and regulations make it exceedingly difficult for parties other than the Democrats and Republicans to compete in elections, or even get on the ballot in the first place. It is absolutely ridiculous that the U.S. government considers itself the arbiter of which election are legitimate and which are not.

ICP: What campaigns or actions the PSL organize against American intervention to Venezuela? How do you tell American working classes about the unjust character of these policies?

BB: A substantial sector of the U.S. population has been affected by the media demonization campaign targeting the Bolivarian Revolution, but there is still widespread opposition to U.S. intervention. There is virtually zero enthusiasm among the population for a military action of any sort. Primarily as a consequence of the experience of the last presidential campaign, the corporate media has lost all credibility in the eyes of a large section of the working class and youth, and we explain that the lies they tell about Venezuela are part of their overall smear campaign targeting progressives and the left.

We have taken part, often a leading role, in many mobilizations defending the Bolivarian Revolution. These frequently take place in Washington, D.C. to counter activities held by counter-revolutionary Venezuelan elites residing in the United States. Actions often take place outside the headquarters of the Organization of American States -- an institution correctly nicknamed the U.S. Ministry of Colonies.

Gloria La Riva, the 2016 Presidential candidate of the Party for Socialism and Liberation, is the Director of the Cuba and Venezuela Solidarity Committee, which organizes solidarity with these two countries and has sponsored many, many events and actions to raise consciousness about the importance of the Cuban revolution and the Bolivarian process in Venezuela.

In addition, while U.S. interference against the Bolivarian Revolution is a consistent feature of all administrations dating back to the end of the Clinton years, the Trump administration is especially bellicose and blatant in its violations of Venezuelan sovereignty. Unlike the Democratic Party, we consider opposition to Trump’s imperialist foreign policy to be an essential part of “the resistance”, and we agitate in favor of Venezuela at our mass gatherings and initiatives.