PSL and ANSWER fight against the Pentagon and its puppets 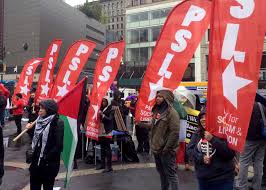 Special interview with Brian Becker, co-director of ANSWER Coalition and co-founder of the Party for Socialism and Liberation (PSL)

Brian Becker answered ICP's questions on the position of the Party for Socialism and Liberation (PSL) and the ANSWER coalition against the latest US aggression.

ICP: US aggression against the DPRK escalates amidst sorties of fighter jets and reinforcement of the south border with missiles. How do the PSL foresee the short-term situation?

Brian Becker: In the short term, the situation is highly combustible and dangerous. It is often thought that the casualties deriving from a military conflict would be so great that the United States would not possibly entertain the idea of what they call preemptive war, which is just a euphemism for a war of aggression. The PSL considers this line of thinking to be naive. There is no reason to minimize the danger of a war of aggression or of the possibility of U.S. military strikes that may be designed to be surgical and possibly aimed at political decapitation of the leadership. In fact, there is a strain of thought within the U.S. political establishment and within the Pentagon that assumes that war with North Korea is inevitable and in fact it is better to have the conflict come sooner rather than later when the DPRK might have bolstered its nuclear and missile technology capabilities. One spokesperson for this trend is Republican Senator Lindsey Graham from South Carolina, who speaks for a section of the military establishment.

The wild card right now in U.S. politics is within the office of the White House itself. Trump represents an unknown force. His mercurial personality combined with awesome power concentrated in the executive branch of the U.S. imperialist establishment leaves room for serious miscalculations, hasty decisions and outright adventures. Trump is not merely a puppet on the string of the military-industrial complex. He is wielding authority with extreme arrogance, recklessness and aggressiveness.

The United States government made a strategic miscalculation under the Obama administration by adopting the policy of “strategic patience” which meant ignoring North Korea. Obama was focused on the Joint Comprehensive Plan of Action with Iran and with the normalization or semi-normalization of relations with Cuba during the second term of his presidency. As a consequence, the DPRK took advantage of the situation to dramatically improve its nuclear weapons capability and its missile technology delivery systems. This altered the relationship of forces in a way that the DPRK leadership considered to be favorable. But as a consequence, the U.S. imperialist establishment has adopted a much more aggressive posture.

The United States does not want to accept the reality of North Korea as a nuclear power. The assumption in Washington is that a peaceful recognition of the DPRK as a nuclear power would serve as a catalyst for the acquisition of nuclear weapons by Japan and that in turn would inaugurate a new escalation of an arms race in the Pacific region in a way that would be destabilizing to U.S. hegemonic designs. North Korea and the United States could come to an agreement along the lines of the so-called double freeze proposal whereby the DPRK would declare a moratorium on future weapons tests in exchange for a moratorium on the massive U.S.-South Korean war exercises that simulate the destruction of their country. This is the approach favored by Russia and China and the DPRK. But as of now it does not appear to be acceptable to Washington or the Pentagon.

ICP: There are good reasons to think that the President Trump’s offensive policy toward the DPRK relates to a broader interest in the West pacific. Given the new administration’s intention to opt for a different expansive model to circumvent deep-rooted problems since the 2008-9 crisis, how do you think the current crisis relate to the competition with China?

BB: A primary objective of the Trump administration is to create a break between the People’s Republic of China and the DPRK. By exerting extreme pressure on China, the United States hopes to convince the Chinese leadership to completely abandon the DPRK. They are using and working from Ronald Reagan’s playbook with Gorbachev and the Soviet leadership in the mid and late 1980s, when the Soviet leadership agreed to abandon the governments of Eastern Europe and allowed them to be re-absorbed into the imperialist camp. Obviously, this was not only a violation of proletarian internationalism but a gross miscalculation on the part of the Soviet leadership that stimulated the advance of counter-revolutionary forces not just in Eastern Europe but in the Soviet Union itself. The Trump administration has been offering carrots and sticks to the Chinese leadership in an effort to convince them to abandon the DPRK in exchange for vastly improved relations between the United States and China.

So far, this strategy has not succeeded, but the Chinese leadership has agreed to impose very severe and draconian sanctions on the DPRK. There is undoubtedly internal debate and struggle within China over this question. It is evident on the part of the U.S. policy makers that they still believe that regime change in North Korea is possible. The United States does not really risk anything from maintaining this level of confrontation and tension with the DPRK. They know that the DPRK will not rashly undertake any sort of initiation of military struggle against the United States. Thus, the United States is satisfied with the current status quo that allows them to maintain immense pressure on both China and the DPRK and provides a rationale for the continuing escalation of military expenditures and significant modernization of U.S. nuclear weapons systems.

ICP: Do you think the American capitalist classes can make use of this crisis to partially overcome the “unhappy white working class” problem that supposedly backs Trump? In other words, do you think that the ruling class is deliberately fomenting war to boost economy under systemic deficiencies?

BB: It is not only the white working class that is unhappy. The entire multi-national, multi-racial U.S. working class is in a state of chronic decline in living standards as a consequence of low wage jobs, the slashing of federal and local social insurance programs and the intensifying class polarization and inequality that is redistributing wealth in the United States from the bottom to the top.

As a consequence of the Vietnam War and then the later debacle in Afghanistan and Iraq, the American people are generally opposed to any large-scale military commitment. Of course, under the circumstances of all-out war, the ruling class in the United States would be able to generate a war fever and hysteria, at least in the beginning stage.

ICP: How do you think the American public, especially working class, would react to a close war threat?

BB: As we stated above, most people in the United States are cynical and generally opposed to any U.S. military commitment overseas. There is however, a deepening hysteria being directed against the DPRK. The demonization of the DPRK leadership by the capitalist-owned media is in full swing. Liberals who look to the Democratic Party and who are generally opposed to the U.S. war in Iraq that began in 2003 are much weaker and prone to the war propaganda directed towards the DPRK. Also, both the Democratic and Republican Party leaderships are united in their venomous hatred and imperialist demonization against the DPRK and its leadership.

ICP:  We know that the PSL is very active and one of the leading forces in anti-imperalist and anti-war struggles in the country. What are some recent acts the PSL has initiated in its struggle with the current war agenda?

BB: The PSL and the ANSWER Coalition are the leading forces in the United States that have been carrying out demonstrations, rallies, educational seminars and other mobilization in opposition to the U.S. war threats in Korea and in solidarity with the people of South Korea who are also fighting against the Pentagon and its puppets who rule over and are the real power in South Korea.