Becker: 'Trump inflames the contradictions of the capitalist system' 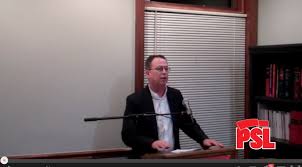 Special interview with Brian Becker, co-director of ANSWER Coalition and co-founder of the Party for Socialism and Liberation (PSL) (Part 2)

Second part of the specail interview with Brian Becker, co-director of ANSWER Coalition and co-founder of the Party for Socialism and Liberation (PSL) on Puerto Rico and  the natural disasters which hit America in 2017.

See the link for Part 1

ICP: Let’s start with the latest disasters that have stroke the region. There is already a wildfire going on in California, leaving tens dead. Washington has clearly failed the test during Irma and Harvey hurricanes. And the effects of the most recent hurricane Maria have caused a devastating humanitarian crisis in Puerto Rico. Common to all is absence of sufficient relief. How does the PSL assess the situation? Why does the government drag its feet?

Brian Becker: Over a month after Hurricane Maria hit Puerto Rico, a colony seized by the United States in the invasion of 1898, huge parts of the island still lack electricity and other basic services. The official death toll is disputed, but in any case the response to the hurricanes that hit Puerto Rico is a monstrous crime of U.S. colonialism. Puerto Ricans are technically U.S. citizens, but are denied basic rights of citizenship and have no representation in the national U.S. government. The well being of the people of Puerto Rico has never been a concern for the ruling class of the United States, which is only interested in the island for economic plunder and as a military asset.

The true goal of the U.S. officials in Puerto Rico is to facilitate the mass privatization of public assets. This is what happened following the Hurricane Katrina disaster in New Orleans. The island’s electric company and the University of Puerto Rico system are among the most valuable public entities that the big banks dream of gobbling up. The Puerto Rican left and social movements have a long history of militant mobilization, and this is what will be needed to defeat the Wall Street vultures. The PSL is committed to supporting that struggle.

Furthermore, climate change contributed to the exceptionally destructive hurricane season this year. The U.S. government prioritizes the profits of the coal, oil and gas capitalists over the very survival of human civilization and has refused to take any serious action to address this crisis facing the planet.

ICP: Is there any particular actions PSL organize regarding the issue? How do the working class victims response to Trump administration’s lack of care?

BB: The Justice Center, where the PSL, ANSWER Coalition and other progressive and community organizations are headquartered in New York, has become the main hub for grassroots relief efforts in the city. The Justice Center is in a historic Puerto Rican working class neighborhood, and New York has the largest Puerto Rican population of any city. Elsewhere in the country, PSL members have organized fundraising and donation drives to send desperately-needed aid.

ICP: Can you tell us the specific condition of Puerto Rico? Why has the US government insisted on imposing shipping restrictions (Jones Act) to the country despite criticisms? How does this relate to the broader US policy towards the Caribbean?

BB: Puerto Rico is a possession of the United States and its people are treated as colonial subjects. This has led to a heroic struggle for national independence from U.S. imperialism since the seizure of the island in 1898. Frequently, this struggle has been led by revolutionary forces committed to the construction of socialism.

The Jones Act restricts Puerto Rico from receiving direct aid/import from foreign nations. The law requires that all goods shipped between U.S. ports, including the ports of the colonized nation of Puerto Rico, be carried by U.S.-owned and operated ships. So, a foreign ship either must pay extremely high tariffs to come into Puerto Rico, or offload the goods destined for Puerto Rico to Jacksonville, Fla., and then reload them onto a U.S. ship and then sent over to Puerto Rico. Not only does this slow aid from getting in, it doubles the cost of getting it on to the island. Countries like Mexico, Cuba and Venezuela have offered tons of aid and medical support but either have been turned away by the U.S. or deterred from getting the aid in because of the Jones Act, and the U.S. blockade against Cuba.

While Puerto Rico is the largest entity under direct U.S. control in the Caribbean, U.S. imperialism has always arrogantly regarded the region and Latin America as a whole to be its “back yard”. Where direct colonial rule does not exist, the U.S. bourgeoisie desires neo-colonial regimes that will give free reign to U.S. banks and corporations.

ICP:  Public critiques mostly target President Trump on the issue. It is not surprising given the liberal anti-Trump propaganda that conceal past failures of the capitalist establishment in the country. But, are the conditions worse in comparison to, for instance, Obama period? How does the PSL address Trump’s position within the establishment?

BB: Of course, the plunder of Puerto Rico and the neglect of its people is a century-old project of the entire U.S. ruling class, not just the Trump administration. No sector of the bourgeoisie is prepared to even contemplate freedom for Puerto Rico. No sector of the bourgeoisie is prepared to take the radical measures needed to seriously address climate change either. Defenders of the previous administration frequently contrast Obama’s support for the Paris Climate Accord with Trump’s withdrawal from it, but even the Paris Agreement is woefully inadequate compared with the existential threat to human civilization posed by climate change.

That said, Trump’s own extreme racism was on full display. In the immediate aftermath of the disaster, Trump was focused on attacking Black athletes who were protesting police brutality by kneeling during the national anthem. When he did speak on the disaster, his comments were often demeaning, and when he finally visited Puerto Rico his disgusting behavior left many shocked.

Generally, bourgeois politicians pretend to be grief-stricken and rush to the scene of natural disasters, pledging all the support needed (which is of course rarely delivered). Trump is disliked by many in the ruling class for his inability to play this role. He inflames rather than contains the contradictions of the capitalist system and the discontent that it creates.