'KKE is the voice of the working people' 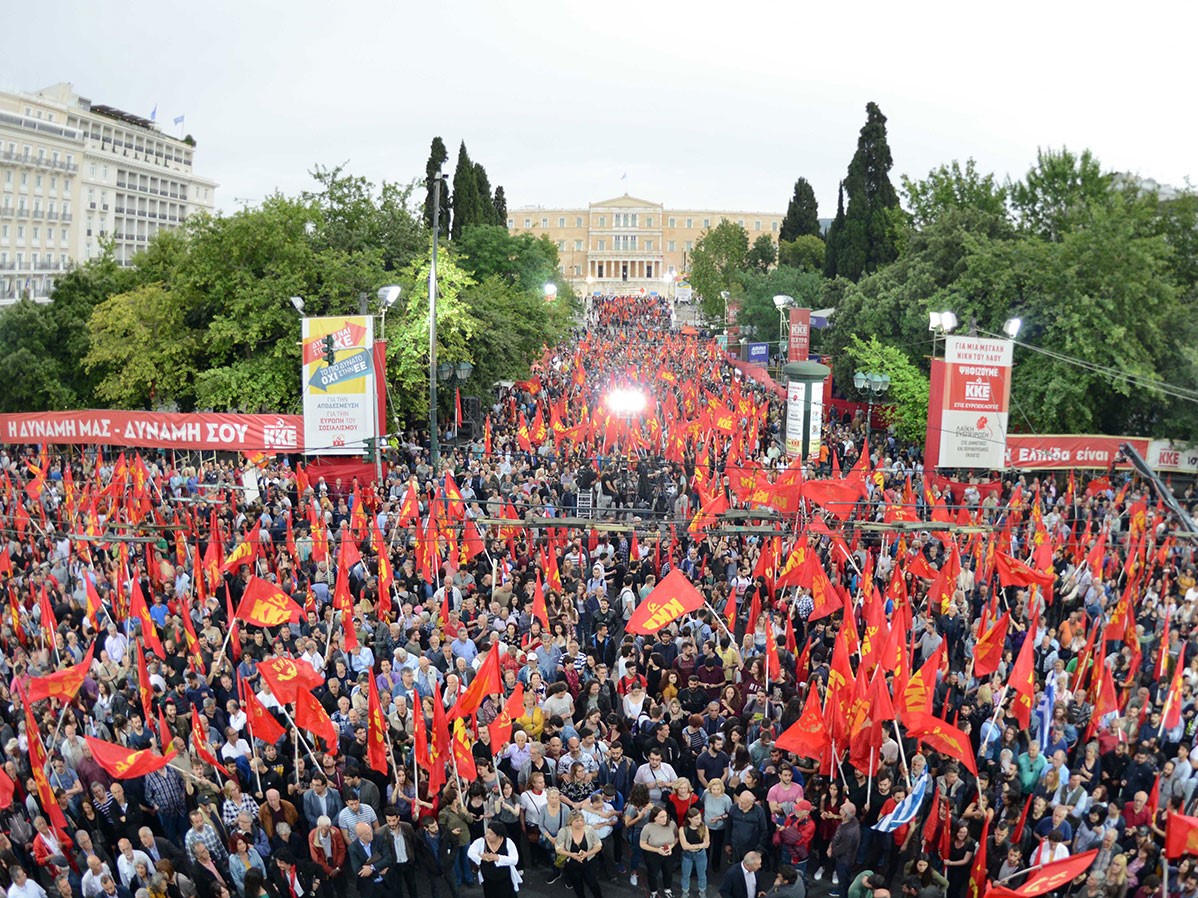 In the campaign for local elections, the KKE calls for a counter-attack everywhere in Greece in order to satisfy the contemporary social needs of the people. What does it mean to exercise "genuine popular opposition" and to have a "strong KKE everywhere"?

The only real popular opposition is the KKE, because the KKE is the voice of the working people, it fights consistently against the policies that support the profitability of the big capital by sucking the life out of the people.

The 127 dead lamented by the people of Attica from floods and fires in 2018 were not the result of natural disasters, but the result of the policies that each year give 4 billion euros! for NATO weaponry for the peoples to battle against each other for the gain of the ruling class, while the Greek people endure unemployment, dramatically reduced wages and pensions, excessively harsh taxation, the degradation of health and education, under-funding of social services and lack of infrastructure.

In recent years they have given 500 million euros for urban renewal! to build the 'Attica Riviera' on the coastal front of Attica, as they call it, in order to increase the profits of tour operators, shipowners, cruise ships, airlines, capitalists. What did they give, you might ask, for the forest and fire service after the lethal fires? They will create, they say, a computer application that will inform the people in the event of ... They don't care about the people at all! They have become the best students of Trump and the Americans. The labor hours put in by the American Ambassador in the Attica Regional Offices and the Ministries, where he spends more time than in his own embassy, did not go wasted.

The five communist mayors of the KKE over recent years have proven in practice what popular opposition really is, together with the people against the bourgeois government of the EU. They gave priority to the satisfaction of the needs of the people and not the profits of the few, they fought for health centers and hospitals, to repair the schools so ceiling plaster doesn't fall on the heads of the pupils, for an end to foreclosures on people's homes, for protective measures defending the right to strike. They defied anti-people laws and European directives and were found guilty in bourgeois courts!

Popular opposition means we resist turning our country into a vast NATO aircraft carrier. We will struggle to live in peace with our neighbors.  We will take the lead in the struggle for humane living conditions for refugees who are victims of imperialist wars and to help them get to where they want to go. To close the concentration camps created by SYRIZA that have locked in 70,000 people. For as long as they are in our country, we struggle so that they are not victims of exploitation, have decent living conditions, and that their children can go to school.

Candidates of “People's Rally" are seasoned fighters. They have played a leading role in the struggles, in order not to burden the working class, the people, even more with the weight of the capitalist crisis.

They projected that hope lies in the anti-monopoly-anti-capitalist struggle and not in a change of manager of the same power, such as SYRIZA.

They fight to win back the losses of the people, for the satisfaction of the people's needs. They will not compromise with the crumbs of capitalist development.

They demand contemporary rights in all aspects of life for the popular family.

Candidates of “People's Rally" are people who also come from other political spaces, but they join with the KKE in the struggle, in the movement and in the elections

Does the “People's Rally" relate to the need to form a "social alliance" amongst the popular strata?

We call on the people in the upcoming electoral battles for the Municipalities, the Regions and the European Parliament to support KKE and “People's Rally" candidates in order to multiply those worker - people's forces and centers of resistances that will challenge, oppose, and obstruct unpopular policies in the period following the elections.

To liberate the people, the workers, the unemployed, their children. To believe in their rights. To trust their strength, to raise their demands to the level of their needs.

To go on the counterattack. To begin the great concentration of forces that will aim at the overthrow of capitalism, disengagement from the EU, NATO and other imperialist organizations.

The KKE warns of the emergence of a twο-party situation in Greece, alternating between SYRIZA and ND. What are the results of this new situation for the people? What about fascist parties in this context?

With their well-known “duelling”, SYRIZA and New Democracy want to hide the fact that both defend the interests of big capital. That is why with the first and second memorandum they added a third, even worse, to load the burdens of the crisis onto the people and to "clear" capital of any responsibility. They quarrel in front of the bosses about who is more capable of implementing anti-popular reforms for their benefit.

ND is the traditional bourgeois party, with the EU and NATO. Together with SYRIZA, despite it having been an opposition party, it has passed all the anti-labor laws: banning the right to strike, freezing wages, establishing new NATO military bases, exempting big business tax evaders. ND acts like the spoiled child whose parents do not care about it because they care more about his new baby brother!

SYRIZA distorts the ideals, the dreams, the values of the left, changes positions, tells lies to the Greek people in order to wrest votes. Mr. Tsipras went to Sibiu, Romania, and signed - together with Orban, Kurtz, and Salvini, the far-right, fascists - a vote of condemnation for those who supported socialism, speaking of the "Iron Curtain" for which no one had dared to do until now, to speak in the name of the struggle against the right, against the far right, against fascism. Their anti-fascism and the struggle against the far right are completely fake.

SYRIZA consistently follows the exact same policy as the previous governments. It gives billions to the shipowners, to shipping companies, while at the same time working class neighborhoods are abandoned, a high percentage of workers are unemployed, there are no open public spaces and childcare centers and right next to their homes rubbish is buried, spreading cancer to the people.

The SYRIZA government, together with the rest of the parties, supports the Nazi murderers. Their trial has been delayed for 4 years now, even though they were caught in the act of stabbing a young man. The SYRIZA government has even reached the point of deciding to cancel the decision of the City Council of Athens not to give pre-election space to the fascist murderers! The state-run ERT, the channel paid for by workers and popular households hosts Nazi commercials, giving them television time for propaganda.

We are battling to kick the Nazi killers not just out of third place, but to get rid of them once and for all. So they cannot find even a stone to hide under to escape the public outcry.

A strike against the black of fascism is done only with red. The red of socialism crushed the Nazi beast in its nest. Even today, nobody in the EU will be able to blur the message of the strengthening of the KKE in Greece. Let us kick the Golden Dawn Nazi out of third place and fill the polls with the red carnations of the “People's Rally" or the KKE ballots.

An Anti-fascist struggle cannot be waged by SYRIZA, who co-governed with the far right for four years !!! All they know how to do is to try and take credit for our people's struggles and to raise obstacles to hope on the eve of the elections.