Further mass mobilizations of communists to come in Brazil 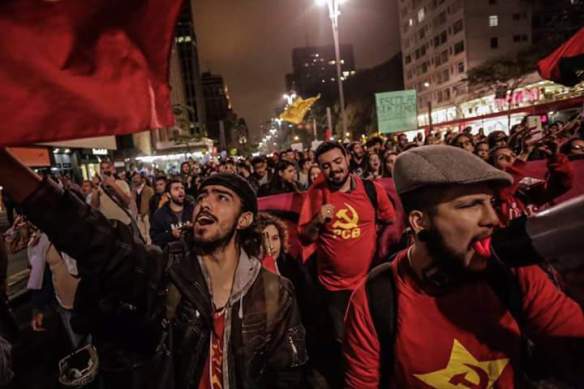 Special interview with Communist Youth Union, Brazil (UJC) on the recent mobilizations of the youth in Brazil.

Since when and for what purposes the occupation at the high schools has been taking place? What is its connection with the recent coup?

UJC: There are two moments of the schools’ occupations in Brazil. The first moment started from the struggle against the privatizations of public schools’ management attempted in several Brazilian states, such as São Paulo and Goiás. It has begun in 2015 and spread to a number of states in which the education professionals were already on strike, such as Rio de Janeiro and Rio Grande do Sul. During this period, claims and struggles focused on the defense of the public nature of the schools against privatizations and impoverishment of the study and working conditions and in solidarity to the education professionals who were on strike.
Now at this point on a second moment, we saw a fresh set of occupations starting in Brazil, but in a new scenario, where, with the coup already established, President Michel Temer, putschist and illegitimate, attempts to pass in parliament the Constitutional Amendment Proposal (PEC) number 241. This proposition seeks to freeze investments in social areas, such as health and education for up to 20 years, transferring public resources to other priorities defined by the Federal Government that represent the big monopolies, such as the payment of the foreign debt and tax exemptions for the economic activity of these same monopolies.
Thus, the current occupations, that now span to the universities as well, seeks to resist and stop the PEC 241, in the struggle for the upkeep of the publicness of education and the ensuring of the investments in public health and against the illegitimate and usurper government of Michel Temer.

Are these students organized into any political framework (political organization)? How do they decide on these squatters who seem somewhat radical?

UJC: The phenomenon of occupations has a character in the dynamics of the class struggle in Brazil in recent years. We live in a period, of a decade or so, of relative calmness among the main instruments of struggle and organization of the working class and youth, broken initially in 2013, with the well-known Journeys of June, that ignited the feeling of fighting Brazilian youth, who at that time fought against the increase in fares of public transport, The current situation is different in several aspects compared to 2013, though it shows the current stage of maturity of the youth in Brazil. We see the presence of the national representation bodies of students, such as the National Union of Students (UNE) and the Brazilian Union of Secondarist Students (UBES), that repelled the students' basis due to the mistakes that their political leaderships committed in recent years, thus creating a certain distance from the youth sectors that are occupying schools and universities. However, often stimulated by right segments that call themselves apolitical and nonpartisan, promoting the denial of politics as a method of action and stimulating a feeling of hatred and revulsion to any entity, movement or political party of the left, some sectors of youth embody the conception of those who want to confuse and undermine the occupations, developing the sense of division and individualism at the base of students. We understand that political differences must be dealt with in democratic spaces formed within each occupation, and not stimulating the exclusion of leftist organizations and political parties, even though profound differences with them remain.
Decisions of the occupations arise from the very foundations of the students, who mostly were not included in the set of representative entities and in the participation in the students' movement. This shows that there is a upswing in the consciousness of the need for organised struggle of the Brazilian students at a time when the bourgeoisie, via Government Temer, applies a deep attack on the most basic rights of the youth.

Do the parents and teachers support the occupations? Or it’s only for students in action?

UJC: There is a clear division in parents for approval or denial of the occupations. The Brazil’s political moment of a retrograde political thinking blooming powers directly on attempts of forced evictions, that it’s been happening in some schools. However, from the fiercer of the class struggles in Brazil, it also begins to show us an indicative of a political resistance and fight escalade on workers’ sectors, which the students’ parents are inserted.
That way, the parents expression to the occupation is much diverse, because they’re also a class struggle expression in Brazil, a response the workers are giving at this moment and the degree of the bourgeoisie’s ideology impregnation in the proletarian’s breast.

How do the government and, eventually, the police treats these actions? Furthermore, how does the mass media approach to the topic?

UJC: The government and the police respond with the immediate criminalization of occupations. Recently, the Ministry of Education issued a statement to the rectors of the occupied universities in order to advise the identification and punishment of the student leaders by the rectories. Police violently represses the acts and actions of students, showing what is the role of the state and its repressive apparatus at a time in which the working class demands its rights and calls into question the capitalist system. The Brazilian media, monopolized by a few families, mainly plays a role in the demobilization of schools, spreading lies, misinforming and stimulating violence against students. At that time, the monopoly of the Brazilian media is one of the main sectors that attempt to legitimize the current government of Michel Temer and its anti-people measures.
What’s the position of the Union of Communist Youth about the occupations? What have been It’s role inside the occupations and the supports for such movements?
The “UJC - Brasil” (Union of Communist Youth) understands that is the moment for a major intensification of brazilian’s occupations, get the mobilizations deeper and ensure the students’ political organization for the struggles to come. We understand that with the occupations comes a great moment to improve the student’s political organization, to fortify the tools of their organization, create students guilds, parties and local entities of representation, taking forward the struggle for a public school and university, knowing that the production of knowledge must be mostly directed to people and students’ wills and demands. The UJC is present in several occupations such as schools and universities, bringing the necessity of a class cut within the occupations and its goals, showing that a struggle for public education is a struggle against the greats monopolies which profit from the commercialization of education, which is a struggle against capitalism itself and its different forms of exploration. Showing that Socialism is the path that shall be taken by Brazil’s people and its Youth.

What are your expectations regarding the future of the moviment?

UJC: The current government, born of a coup and an institutional maneuver orchestrated by the most conservative sectors of Brazilian society, imperialism and the monopolies, that no longer sensed confidence in the government Dilma (PT) to implement austerity measures that ensure maximum exploitation the working class and the profit rate of the big capitalists at a time of economic crisis.
As a result of its anti-people measures and of the ruse that lead to his inauguration, the government is the target of a deep sense of rejection by the workers and the Brazilian youth. We analyze that it's possible that Brazil has an explosion of mass movements on this next period, as we see an agenda of deep attacks on workers' rights that were conquered decades ago. We note that the youth will be one of the sectors of the class that will be ahead of the main struggles of the country, either because of the economic crisis that pushes them to unemployment and more exploitative working conditions, creating a need for real change in their living conditions, germinating a revolutionary consicence. This germination is demonstrated by the examples of the strength and disposition of the Brazilian proletarian youth, that has been demonstrating along a few years the rebellion needed to overcome the enemies of the people.