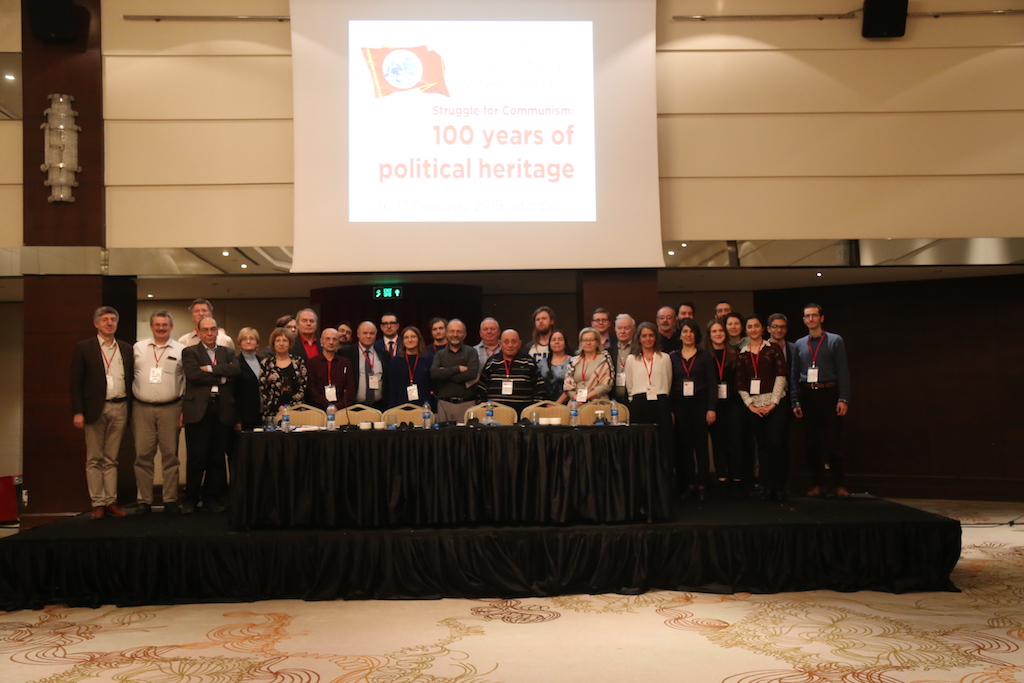 The European Communist Initiative meeting titled "Struggle for Communism: 100 Years of Political Heritage" hosted by the CP of Turkey (TKP) took place on February 16-17 in İstanbul.

The meeting being held on the 100th anniversary of the establishment of the Comintern elaborated on the history of the international communist movement and collectively discussed the challanges faced by the communist and workers’ parties at critical moments during the 20th century.

At the outset of the meeting, the communist and workers’ party delegates were greeted by the TKP International Relations Bureau, followed by the opening speech by TKP Secretary General Kemal Okuyan. According to the news portal soL, Okuyan made the following remarks:

"While the Comintern was being established, the majority thought that the days of capitalism were numbered. Even the most cautious could never have predicted that a hundred years later capitalism would continue to exist as a world system. Following those who had the will to establish the World Party in 1919, we are looking at the past with the unshakeable belief that the bourgeoisie will be defeated and we ask ourselves ‘Why has it been so long, why is the victory delayed so long?’

“This question is different from the question ‘what was our mistake?’ ... Recognizing the mistakes we have made in the past is undoubtedly a task we cannot escape. However, the primary condition of learning from the past is to link all of our evaluations to the answer to the question "how can we achieve success?

“If we do so, we do not fear our own past; we will not deny our past as some others do in shame. If the working class came to power in a number of countries in the twentieth century, more will take place in the 21st century. We look at the past when we are looking for ways to realize this claim and we are taking lessons accordingly."

The first session of the meeting titled “Revolutionary Uprisings” addressed two historical events. The lessons from the first Hungarian Workers' State (1919) was discussed by Gyula Thurmer, President of the Hungarian Workers’ Party (HWP). Alexander Cherepanov Kipriyanovich, Secretary of the Russian Communist Workers’ Party (RCWP) made a presentation on the October 1993 uprising in Russia, questioning whether is was as a missed opportunity or a provocation.

On the second session titled “Social Democracy and the CP’s”, Henrik Aris Patris, CC member of the CP of Sweeden (SKP) and Runa Evensen, Chairperson CP of Norway made presentations on the myth of Scandinavian social democracy and the communist movement after WWII.

The topic on “The Strategies of the CP’s in the Period of Fascism and WWII” was assessed in two sessions. Astor Garcia, Secretary General of the CP of the People’s of Spain (PCPE) discussed the strategy of the CP during the Civil War while Niko Kallionalusta from the Communist Workers’ Party – For Peace and Socialism from Finland reviewed the Soviet-Finnish War of 1939-40.

Under that topic, Eleni Bellou, Member of the Politburo of the CC the CP of Greece (KKE) drew conclusions from KKE's armed struggle during WWII and from the struggle of DSE (Democratic Army of Greece), through the scope of the strategy of the international communist movement.

In the same session, Guido Ricci, CC International Department of the CP, Italy discussed the failure of the strategy to support bourgeois governments after the WW II. The Communist Revolutionary Party of France (PCRF) furthered the discussion with a presentation on the policy of the CP of France in the framework of the National Council of Resistance and its participation in the government (1944-1947).

On the second day of the meeting, the session on “The National Question” included the presentations of Aydemir Güler, Member of the Party Central Council of the CP of Turkey (TKP) on TKP’s role in the National Liberation Movement in 1920, Victor Degiovanni, Secretary of the Central Committee of the CP of Malta (PKM) on the independence struggle of Malta, and Beata Karon, Responsible for International Relations of the CP of Poland (KPP) on Soviet-Polish war in 1920 and the working class movement in Poland.

The following session titled “The Soviet Experience and Post-Soviet Period” dealt with the contributions of the Baltic Republics to the socialist experience in the USSR, by Ingars Burlaks, Vice Chairman of Socialist Party of Latvia (LSP) and Konstantinas Gorskovas, Member of the Board of the Socialist Party, Lithuania (SP).

Kipriyanovich, Secretary of RCWP made an extensive presentation embracing the fight against the degeneration of the CPSU, the Congress and the XXVIII course on the market, followed by the continuation of Gorbachev opportunist politics after the collapse of the USSR. In the same session Leonid Efimovich Shokolnikov, First Secretary of Republican Committee of the Belarusian CP of Workers-Section of the CP of the Soviet Union (Belarus CPSU) discussed the class essence of Lukaschenko governments.

The last session titled “The Experience of the Socialist Republics” received the contributions of Vladimir Kapuralin, Responsible for International Relations of the Socialist Workers’ Party of Croatia (SPR) and Nikolaj Pavlovski, Responsible for International Relations the CP of Macedonia on the experience of the so-called self-management in Yugoslavia.

In each session, the communist and workers’ party delegates posed questions regarding the presentations, made contributions and elaborated the discussions. The TKP, as the organizer of the meeting, declared that the detailed papers of the presentations would be gathered and published.

At the end of the meeting, the General Secretary of the TKP Okuyan made a closing speech, saying “We learnt a lot from eachother but we have to proceed”. Pointing out that the differences between parties don’t only stem from the differences between the countries but also from their different approches to critical issues, Okuyan emphasized the need to carry on with the discussions without neglecting these differences.

“If we do not infer and learn from these discussions the meetings will be in vain” said Okuyan, “In this meeting we not only discussed many issues but also learned how to discuss and develop our discussions.” Okuyan underlined that the priority of the European Initiative members is to strengthen their influence in the working class in each country in order to get prepared for socialist revolutionary moments.

The solidarity statement with the TKP’s local election campaign was signed by the European Communist Initiative delegates. At the end of the meeting, the delegates joined a Party event in the district of Kartal where the mayor candidates of the municipalities of İstanbul , all being workers, made speeches. The metropolitan mayor candidate of TKP for Istanbul, Zehra Güner, as one of the women nominated as the mayor candidates of the three metropolitan cities in Turkey, also made a speech. The solidarity statement of the European Communist Initiative was read at the meeting and met with great applause.