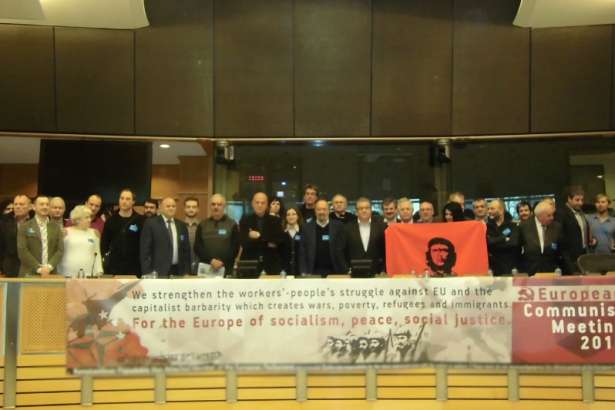 Communist and Workers' Parties from Europe met in Brussels with the struggle agenda against "capitalist system which produces war, poverty, refugees and immigrants"

The European Communist and Workers’ Parties met in Brussels on the agenda statement as: ‘We strengthen the struggle of the working class against the barbarism of the capitalist system which produces war, poverty, refugees and immigrants’.

The opening speech was made by Dimitris Koutsoumpas, the General Secretary of the Communist Party of Greece,in the meeting, which 36 Communist and Workers’ Parties participated in. Koutsoumpas stressed the need of escalating the struggle of the Communists against imperialism; the social democracy which is going hand-in-hand with imperialism at the expense of the people and the fascist movement that is gaining power in Europe. General Secretary underlined the importance of staying on the socialist perspective in order to yield results.

Throughout the meeting delegates of the participant Parties exchanged views on the intensifying conflicts of the imperialist system and the deepening of the capitalist crisis.

The Syria crisis, being the most important agenda, was discussed on its various dimensions.

The delegates of the Communist and Workers’ Parties highlighted the harmful role of the rising of the new European   "social democratic parties" in the struggle against capitalism and imperialism.

The meeting, while saluting the on-going struggles of people in various countries also underlined the primary duty for the communists as to stay in solidarity with the refugees.

The list of the participant Parties is as follows: