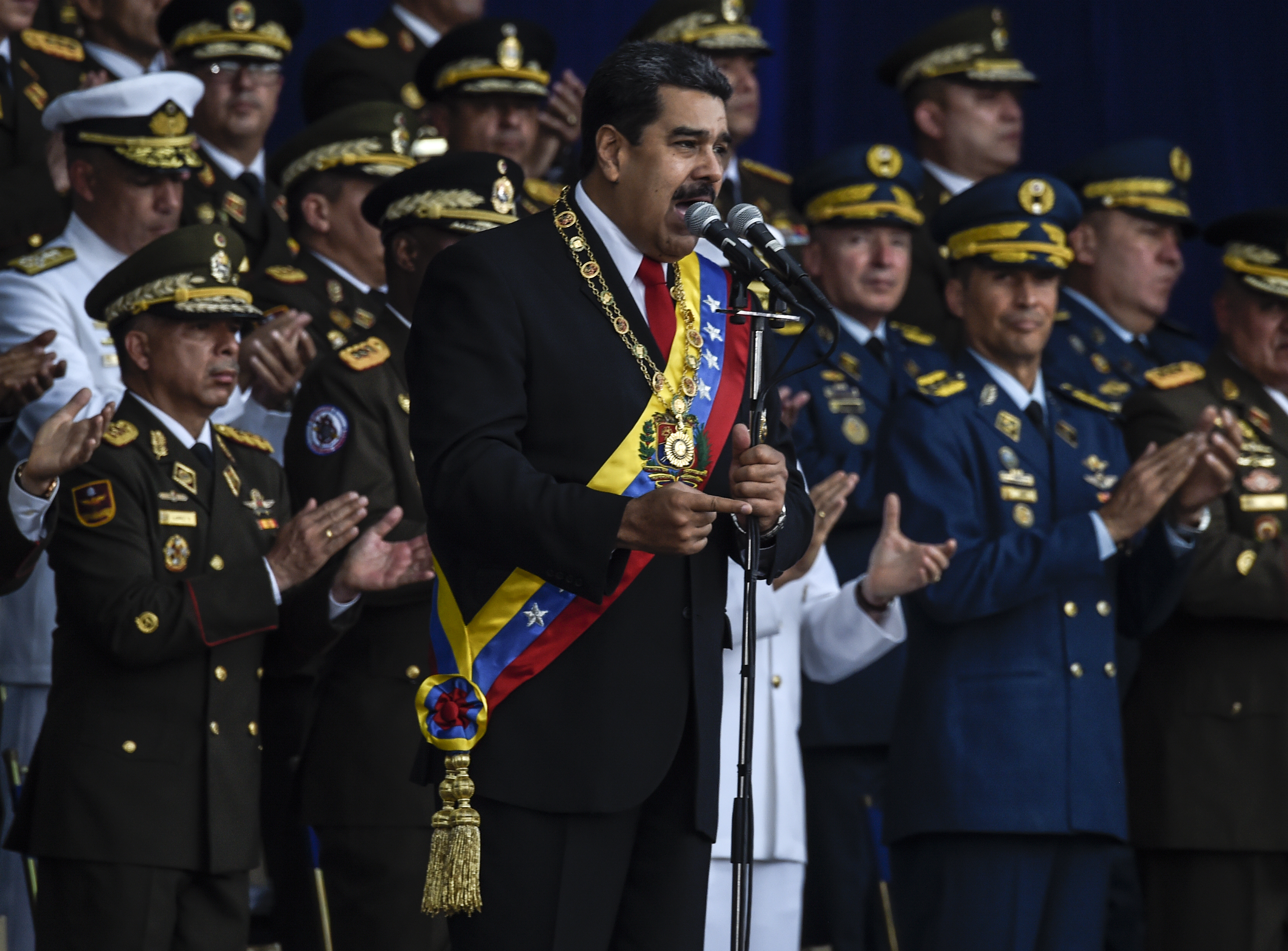 The assasination attempt of the President of the Bolivarian Republic of Venezuela Nicolás Maduro Moros was condemned by communist and workers' parties expressing their solidarity with the Venezuelan people. (updated)

The Communist Party of Venezuela (PCV) issued a declaration expressing solidarity with President Maduro and with the military personnel wounded in the attack. The declaration by the Political Bureau of the Central Committee of PCV stated that the attack is part of the action being carried out by ultra-right sectors, ‘not belonging to any country, at the service of imperialism, which in the development of its recolonizing plan has unleashed wars of aggression and looting that have destroyed, devastated, divided and destroyed entire countries to maintain, recompose and strengthen its global hegemony.’ According to the declaration, the assassination attempt is a part of the ‘multifaceted onslaught of the imperialist powers and their regional and local partners to overthrow a government legitimately elected by the Venezuelan people, through actions and political, economic, social, military and media aggressions’.

The PCV reiterated its call to the Worker-Peasant, Communal and Popular Revolutionary Unity, to achieve the maximum organization and mobilization in defense of the Venezuelan people and the country. PCV also called for the creation of the Continental Anti-Imperialist Front, which will ‘allow us to gather forces in order to defeat the enemy of our peoples: imperialism, mainly the United States, opening the way to national liberation and the socialist perspective.’

The Communist Party of Cuba (CCP) issued a message by the First Secretary of the CCP and Army General Raúl Castro Ruz, expressing full and unshakeable solidarity with Venezuela and unrestricted support of President Maduro and the civilian-military union of the Bolivarian and Chavist people. The Revolutionary Government of the Republic of Cuba issued a declaration saying, 'This act of terrorism which aspires to ignore the will of the Venezuelan people constitutes a new desperate attempt to attain, by the route of assassination, what they have been unable to attain in numerous elections or via the 2002 coup d’état against then President Hugo Chávez, the oil coup of 2003 and the unconventional warfare waged by media campaigns, sabotage and by violent and cruel acts. '

The declaration pointed out that imperialism’s policy of harassment to overthrow the Bolivarian Revolution includes ‘the arbitrary, aggressive U.S. Executive Order describing Venezuela as “an unusual and extraordinary threat to the national security and foreign policy” of the United States; unilateral economic sanctions in violation of international law; the statement by the U.S. Secretary of State asserting that the Monroe Doctrine remains in full effect and calling for a military coup against the constitutional government of Venezuela; and the U.S. President’s threat of using “a possible military option” against the country.’

The declaration reminded the warnings of Raul Castro Ruz as the General of the Army in a speech in July, expressing that 'The aggression and violence of coups against Venezuela hurt all of “Our America” and they only benefit the interests of those who persist in dividing us so that they may exercise their domination over our peoples'. The declaration also quoted Miguel Díaz-Canel Bermúdez, the President of the Councils of State and Ministers of the Republic of Cuba, in his speech in 24th Sao Paulo Forum in July, saying 'Strengthen the conviction that fighting for Venezuela is fighting for the integration of the region, for the respect and sovereignty and independence of “Our America”'.

The Party of Communists USA (PCUSA) and League of Young Communists USA expresed solidarity both with the Bolivarian revolution in Venezuela and the people of Nicaragua, pointing out that the two countries are under the attack of imperialism. According to the statement of the International Department of PCUSA, 'Recent events are more than just threats, they are physical attacks coordinated in the interests of the United States government for regime change' the statement said. 'In Venezuela and Nicaragua, the right wing is working alongside outside forces, chiefly the U.S. to roll back all of the developments in these respective countries, and deny their people's right to self determination. International economic cartels, always aligned with United States, are the forces leading the counter-revolutionary movements in Latin America.' The PCUSA and LYC called the progressives in the United States to support Venezuela and Nicaragua against imperialism, underlining that it is the task of communists to lead the struggle within the USA, being the government who is mainly responsible for these attacks. 'We urge for the government of the United States and its citizens to fight for peace and not regime change' said the statement.

The Party for Socialism and Liberation (PSL) in the United States energetically condemned the assassination attempt and expressed full solidarity with President Maduro, and with the people defending their Bolivarian Republic of Venezuela. The statement by Brian Becker and Gloria La Riva on behalf of the Central Committee of the PSL said 'The hand of U.S. imperialism is behind this attack, as clearly evidenced by Trump officials’ open calls for a military coup, but also the almost 20 years of terrorist plots, coups, economic sabotage, destabilization campaigns, sanctions and aggression. These are all part of the playbook of counterrevolution engineered in Washington DC and Langley, Virginia.'  The statement pointed out that it is more urgent than ever for all people who believe in the right of self-determination and sovereignty to stand with Venezuela’s Bolivarian Revolution, and demand 'Hands Off Venezuela, No U.S. Intervention in Latin America and the Caribbean!'

The Communist Party of the People's of Spain (PCPE) emphasized in its statement that the act demonstrates ‘the true nature of the so-called "democratic opposition"’. According to the statement issued by the International Department of the PCPE, 'These ultra-right groups, supported by US and EU imperialism - especially by the right-wing parties, some sectors of the social democracy and the media in Spain - are capable of using all kinds of violence, also against the population civil, to overthrow the government. It is a process that is not new, it was already with the attempted coup in 2002, with the employer's strike in 2003 and with the current economic and commercial war against the Venezuelan people.' The ID of the PCPE asserted that 'these facts teach us - once again - the total disdain of the defenders of capitalism for popular decisions when they do not fully satisfy their interests: The defense of monopolies and the maximum possible economic benefits for capitalists. Coups d'état, failed or successful, are a frequent tool of North American and European imperialism'.

The Communist Party of Turkey (TKP) issued a statement with the heading ‘Imperialism will be defeated, the Latin American peoples will triumph.’ The statement said, ‘US imperialism is hammering all the progressive powers in Latin America to turn the continent once again to its backyard by using all means, including economic blockades, operations, sabotages, military coups and armed interventions. It becomes more aggressive as it faces the resistance of the conscious Venezuelan people, making use of its militia to reach its goal, without hesitating to use brutal methods in public spaces.’ According to the statement, the attempt of the counterrevolutionaries targeting Maduro ‘actually targets the ideals of the Venezuelan people and the working class for a dignified and egalitarian life; the public establishments, the organization of the people and their capacity to fight for this cause.  Such outrageous attacks are doomed to fail in casting shadows on this ideal, on the achievements of the Bolivarian Republic, on the Venezuelan people's culture of resistance and on the hope for revolution.’

The Communist Party of Greece (KKE) condemned the attempt and denounced any foreign intervention in Venezuela's internal affairs. The statement of the Central Committee of the KKE said, 'It is an act that consists part of the intensified aggressiveness of  reactionary forces of the domestic oligarchy, which are provocatively supported by the USA, the EU and other imperialist powers.' The CC of the KKE expressed its solidarity with the working class and the other poor popular strata of Venezuela, adding 'The people of Venezuela have every right to choose the way their society evolves. We support the struggle of the Communist Party of Venezuela (PCV) against the tragic consequences of capitalist barbarism, against monopolies and their power, for a world without exploitation of man by man, socialism' it said.

The Communist Party (CP) from Italy sent a solidarity message to the people and workers of Venezuela against 'the cowardly attack on President Nicolas Maduro.' In the statement of the Communist Party asserted that 'Imperialism shows its true face, using every means in an attempt to overthrow a government that does not want to bend to the interests of big monopolies. We support progressive forces and Communist Party of Venezuela in the fight to deepen the process process in a revolutionary sense and move towards new achievements.'

The Communist Party of Chile (CPC) responded to the attack during its National Conference and issued a statement in the name of the National Conference. 'From our principles of non-intervention, self-determination and peaceful resolution of political controversies, we reject this terrorist attack that only seeks to create a situation of generalized violence in search of military intervention, coup d'état or civil war' said the statement. The Communist Party of Chile urged the Chilean government to condemn this fact and the same to the Lima group and not to encourage a climate of escalation of events such as this attack. The Conference approved a vote of solidarity with the people of Venezuela, with President Nicolás Maduro and the affected authorities.