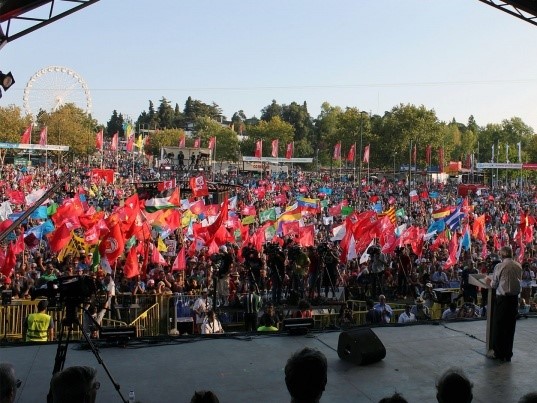 GS of the Portuguese CP de Sousa took the floor at 'Avante!' Festival.
ICP, 20 September 2019
The 43rd "Avante!" Festival was held in Seixal on September 6-8 with the participation of thousands of people. On the last day of the Festival, Jerónimo de Sousa, the General Secretary of the Portuguese Communist Party (PCP), took the floor. De Sousa began his speech by greeting the participants and guests, friends from the Ecologist Party "The Greens" and the Democratic Intervention. He continued with a special salute to the Portuguese Communist Youth (JCP).
The General Secretary reminded that capitalism, and its exploitative, oppressive, aggressive and predatory nature, is at the root of the problems, crises, conflicts, wars, and immense scourges afflicting the peoples of the world. He emphasized the importance of the convergence and unity in action among communists and between these and other progressive forces and called for firm and active solidarity with the peoples and forces on the front line of imperialist aggression.
As to the approaching parliamentary elections to be held on October 6, de Sousa declared, "Today, we need to wage and win a new battle — create conditions to continue to advance and avoid going backwards. Advance decidedly towards the solution of the Country’s main problems, which remain postponed. Advance in deepening the rights and living conditions of workers and people, fend off the dangers of any return to policies of impoverishment and increased exploitation."
The PCP will enter the elections under the Unitary Democratic Coalition (CDU), an electoral coalition between the PCP and the Greens. In his speech, de Sousa announced that a vote in CDU is the only vote that can guarantee a more certain and secure path forward. It is the sure and secure vote to insure a most just distribution of wealth and that won’t resign before injustice and inequality. The General Secretary further described this as follows,
"A sure vote to guarantee a developed Portugal, of solidarity, justice and progress! A secure vote to achieve a left-wing policy and ensure dignified wages and pensions, effective social rights, better working and living conditions for all. A vote that truly matters to strengthen a patriotic policy and guarantee the Country advances in the fight against its weaknesses and dependencies! A vote to combat the causes of our backwardness and affirm a sovereign development. A vote investing in our national potential and wealth, defending them to guarantee the development, progress and improvement of out people’s living conditions."
Jerónimo de Sousa put forward that the big economic interests want two things: an absolute majority for the Socialist Party (PS) and less strength for CDU, which they consider as the true obstacle to their project of exploitation and setbacks. Hence he added that a vote in CDU also will mean to stop the PS from having its hands free to practice old policies, a secure and coherent vote that decides another policy. He said that Portugal is far from resolving the problems that years and years of right-wing policies created and which the present governing policy is incapable of resolving. The General Secretary asserted that the country needs a patriotic and left-wing policy, an alternative policy that will ensure a free and democratic Portugal, based on respect for the Constitution.
See the link for full speech in Portuguese and English.
Tweet