TKP on snap elections in Turkey 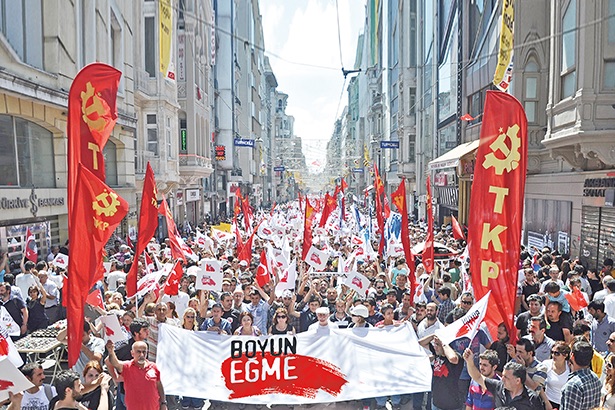 The Central Committee (CC) of Communist Party of Turkey (TKP) has released a statement following the call of President Erdoğan to hold early elections in Turkey on June 24.

TKP has made a statement entitled ‘This social order will be toppled down - People have a choice’ following the call of President Recep Tayyip Erdoğan for early presidential and parliamentary elections on June 24, 2018, after his meeting with the leader of the fascist National Movement Party (MHP). This party is expected to form an alliance with Erdoğan's Justice and Development Party (AKP) in the upcoming elections. Both elections had initially been scheduled for November 2019.

The statement of TKP argues that Turkey is experiencing a political gridlock that cannot be eliminated with early elections. It is underlined that this gridlock is due to the ‘Turkish economy that has come to an almost complete standstill’, the ‘Turkish foreign policy which tosses and turns restlessly within the imperialist world’, the ‘internal policies which fail to go to the root of the problem but fiddle with fake solutions’, the ‘fact that large masses are condemned to despair and helplessness’ and the ‘social order that persistently creates poverty, unemployment, injustice and tyranny’.

TKP mentions that the party ‘will do its best to strengthen, to organize, to put flesh and bones’ to create people’s answer to the current situation in the country during the election period. TKP states that the Party has met the eligibility criteria to enter the elections.

The early election decision raised doubts on an election conspiracy since the Supreme Election Board (YSK) of Turkey, which acts according to the directives of the AKP government, announced earlier in 2018 that only 9 political parties were eligible to take part in the elections. Some parties including TKP were unlawfully excluded from the eligible parties list released by YSK. TKP decidedly states that if YSK ‘insists on pursuing the goal to keep the TKP out of the elections, no one should expect the TKP to show humility and step aside.’

TKP calls the people of Turkey to organize the will to topple down the social order along with the party.

See the link for full text in English.