PCPE: 'Strike is not a crime!' 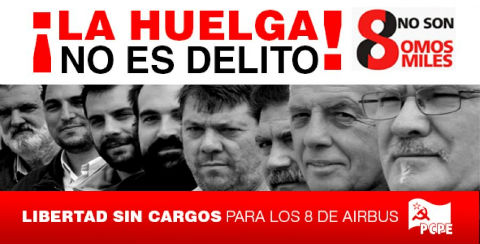 The Communist Party of the Peoples of Spain (PCPE) released a declaration denouncing the trial against the Airbus workers.

PCPE,  released a declaration denouncing the trial which was held between 9 -12th of February, against eight Airbus workers who exercised their right to strike on the occasion of the General Strike against counter-reformist employment policies.

The statement stresses the political intention of the trial which is against the working class and also their right to defend themselves against the theft and the exploitation  by the capitalists.

The PCPE calls the working class to organize a big campaign for the freedom of the  Airbus workers and reminds the means of struggle by saying:

“The right to strike, to stop production shows that without the working class not a single wheel moves or not a single euro of wealth is generated. We, the workers, are the producers of value and for that reason we have the power to decide.”

To see the full text of the declaration in Spanish see the link.
Tweet