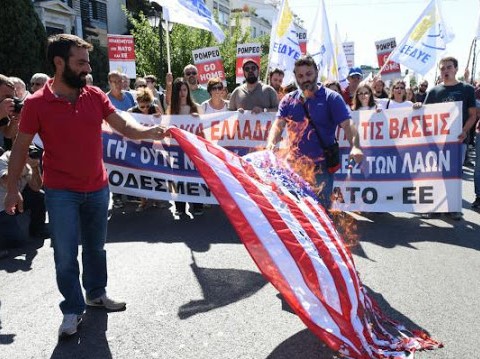 KKE protested against Pompeo's visit and the conversion of Greece into a vast US-NATO base.

On October 1, the Political Bureau of the Central Committee of the Communist Party of Greece (KKE) called for uprising and mass participation in the mobilizations of the anti-war and anti-imperialist movement against the visit of the US Secretary of State M. Pompeo and against the conversion of Greece into a vast US-NATO base. The Party refuted the renewal of the “Mutual Defense Cooperation Agreement” which was signed in 1990 between Greece and the United States. The Party protested Greece’s signing of the protocol, saying it to be an excuse for taking advantage of Greece instead of being useful to the citizens of Greece.

In the statement, it was pointed out that the agreement, preparing people to be a target of imperialist competitions to share the loot in energy, transportation routes and the spheres of influence, further engages Greece and its citizens at great risks. The US-NATO bases are not built to protect the country and the borders but to serve as bases for war and interventions, to protect the interests of energy giants. On US Ambassador, G. Pyatt's statement that Greece is a “geopolitical hinge” and a “frontline state” for the US, the KKE warned that Greece will be a “magnet” for potential attacks. It was reminded that Russian and Iranian officials stated recently that in case their countries are threatened, they will turn their missiles against the countries hosting US bases. The Party put forward how Turkey, as a NATO force, is escalating aggression in the Aegean and Eastern Mediterranean, calling into question and violating borders, despite the claims that Greece's entanglement in US-NATO plans will protect the country from her eastern neighbor. According to the statement, the participation in NATO and the EU over the years, the presence of NATO bases in Greece not only did not prevent but on the contrary, sharpened Turkish aggression.

Criticizing the lies they tell about the alleged “benefits” that the Greek people will have, the KKE briefly listed the risks that people will face while bourgeoisie carries out its upgrading: new wars, poverty, uprooted people from their homelands. The only winners will be those parts of the capital that will benefit from energy and other business partnerships, which among others, hand the country's public wealth to domestic and foreign business interests. The KKE demanded,

The Party called upon the people to raise the slogan, “No land, no water for the murderers of the peoples!”

On October 5, Athens protesters made their opposition, against the renewal of Greece-USA military bases agreement, loud and clear, by burning a USA and a NATO flag outside the US Embassy. Shouting out the slogans "Neither land, nor water for the killers of the peoples," "Shut down the bases, no participation - no involvement in NATO war," "We do not want NATO protection - Outwith the predatory alliance," and "Greece out of NATO," protesters expressed the popular sentiment against the expansion of NATO bases and gave a categorical response averse to the governments’ and other bourgeois parties' efforts to cultivate dangerous complacency and expectations, trying to convince for the so-called “benefits” of the agreement. Protesters threw red paint at the statue of former US President Truman. Police forces rushed to defend the statue and responded by throwing chemicals and stun grenades at the demonstrators, yet unable to thwart the protesters' decision to express popular sentiment against the expansion and presence of the bases, heading towards the US embassy.

The GS of the CC of the KKE D. Koutsoubas attended the rally and told reporters: "The signing of the new agreement between Greece and the USA, particularly the presence and expansion of US military bases in Greece, leads the Greek people to even greater insecurity, even greater regional instability, even greater involvement in interventions, in missions across borders and imperialist wars, and for that reason we are raising a stern 'no' to all of that here today. We continue the struggle, we continue the resistance. "

Similar demonstrations took place in dozens of cities around Greece.