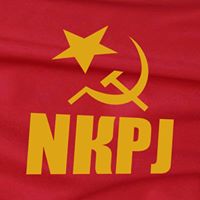 Special interview with Aleksandar Banjanac, the General Secretary of the New Communist Party of Yugoslavia (NKPJ).

ICP: Recently we are witnessing the reproduced forms of Serbian nationalism. War criminal Vojislav Seselj's Serbian Radical Party gained 22 seats in the latest parliamentary elections. On the other hand, government of Serbia attempted to restore the honour of Nazi collaborators such as Milan Nedic. NKPJ had a series of protests withstanding these attempts and against the existence of fascist organisations in the universities. How does your party aim to continue by its stance against nationalism?

Aleksandar Banjanac: From the establishment of our party onwards, we have always opposed all forms of chauvinism, fascism and discrimination.
As in Serbia, as well as in post-Yugoslavian republics, nationalism has been the legitimating ideology of ruling classes and of imperialist aims. This idea has separated the working class ethnically, led them to a social, material and class collapse. Moreover, it paved the way for restoring the honour of Nazi servants and revisionism.
We always try to reveal and show the background of nationalism. We sustained our position in our protests against restoring the honour of public enemies who existed during the World War II. We are also presenting this stance in our party program, announcements, in discussions and while calling to party alignments.

Presidential and probably another parliamentary elections will be held in Serbia within this year. What will be NKPJ's position?
New Communist Party of Yugoslavia will show an organised stance by presenting the president of the trade union of “Sloga” comrade Željka Veselinović as candidate. Sloga is the only World Federation of Trade Unions-WFTU member in Serbia. Before the elections a ten-article election program has been already prepared. These articles highlight collaborations with IMF, the World Bank, EU and NATO, as well as privatisations and nationalist policies as a target. It is still early for speaking about parliamentary elections.
Serbia's electoral system doesn't consist equal conditions for the participants. If you are not financially capable enough before and while attending the elections, you inevitably facing with difficulties. In the upcoming elections, by collaborating with Sloga we are going to come over this obstacle.
We are expecting a new vault on behalf of the working class in the elections and also creating a stronger organisational form among our members and allies.

ICP: A few days ago, that a train heading on the recently re-established railway route between Belgrade and Kosovo's Mitrovica was stopped by Kosovar officials due to the cover of the train with the slogan of "Kosovo is Serbia" written in 21 languages, caused a new political crisis. What are your predictions on further political atmosphere concerning Kosovo?

AB: “Republic of Kosovo” is a NATO base right in the centre of Balkans. “Independent Kosovo” discourses are the result of the expansionist-occupant war and intervention to SR of Yugoslavia by NATO forces in 1999.
At the same time, this intervention means the occupation of Kosovo and Metohija, which is a strategically significant region. On the other hand, Balkans are under the control of US forces for so long. One of the largest US bases in this region is “Bondstil”, situated in Uroševca, Kosovo. Recently, proofs on the existence of a war prison inside the base were published in the press. In other words, we can call it as European Guantanamo. Moreover, a new military aid by the government of Trump to Kosovo is being expected.
Both governments in Kosovo and Belgrade are NATO servants of the same degree. The intervention to the train by Serbian government was pre-election propaganda. At the same time, this has a meaning of gradual recognition of Kosovo by the government, which is directed by the western imperialism. Current situation can only warm up the Serbian and Albanian nationalisms. Eventually, this endangers Serbians in Kosovo. These steps are not needed by anyone except of them. What they are capable to show is only their inabilities.
This agenda is going to keep its fragility until the imperialist occupation and aims at coming to an end. Sustaining peace and realising solidarity among Albanian and Serbian peoples is not at loose hands of NATO. Both sides are victims of NATO. The peoples of Balkans will be able to determine their own future only if Balkans belong to them.

ICP:The stance of Russia in Ukraine led EU impose an embargo on Russia. Concurrently Russia announced the Turkish stream, a pipeline project, which included Serbia within its route. Shortly after, Russian president Vladimir Putin visited Belgrade, where his visit included also a joint military parade of Russian and Serbian armies. Government of Serbia was criticized of showing pragmatism due to ongoing negotiation process with EU on the other side. What is your comment on the position of Serbian government concerning these relations?

AB: Yes, the government of Serbia showed a pragmatist stance by supporting fascist bands and illegitimate President Poroshenko while negotiating with Russia. Even the EU was criticized for not pressurising Serbia enough. This is clearly a proof of the dominance of EU over the government.
Just after Putin’s visit to Belgrade and military parade, the government was obliged to give a statement to NATO, which at the time beclouded the agreements. These agreements give several priorities to NATO in both military and civil fields. In a state of war, we will have to give the control of our bases, hospitals and airports to NATO.
We don’t need such a pragmatism. One of our idioms say “if you don’t feed your own army, you feed else’s”.

ICP: A while ago NKPJ held its congress. One of the most outstanding decisions taken in the congress was rejuvenation objective, which leant upon the trust over your youth organisation SKOJ. What is the expected yield of this transition in NKPJ?

AB: Rejuvenation objective was a draft planned for many years. It was concretised in our Fifth Extraordinary Congress. I was elected to be the new general secretary of our party in the same Congress and my age is not even 34. We have even younger comrades in the secretariat, politburo and central committee. We are one of the rare communist parties in the region having such young administration.
Despite all the difficulties and restrictions, we target to realise a powerful worker’s party. We need a NKPJ, which will be able to respond to the needs of workers. We need to organise the youth who will break away from the system of exploitation, who will not consider socialism as a nostalgic era and will take it as an only alternative against capitalism. As long as NKPJ relies upon youth, youth will rely upon us too.

ICP: Why are you taking Yugoslavia -which is today divided into many different states- as your scale of politics instead of Serbia?

AB: First of all, even that Yugoslavia is separated into several parts, manipulated and its resources are wiped off, we don’t think it has lost its historical significance.
We are the only party approaching to the national question with Yugoslavian identity. Even though the national question was not solved as desired, we have the will to solve this issue by redefining all of the peoples of this region as a whole. Another past issue was the existence of interior borders within Yugoslavia. It was one of the main reasons of the war that occurred just after the dissolution.
Moreover, it is obvious that peace has not been established in the region since 90’s. Frictions among peoples and governments of ex-Yugoslavian countries often warm up.
Intervention of western imperialism divided our country in economical, martial, national, social and educational terms. After the dissolution, they even exported their policies to the new governments.
By using the term of Yugoslavia, we present its actual legitimacy. While we use this term, we also remark the NATO occupation. We insist that all progressive forces must show joint stance against this occupation.
People defining themselves with Yugoslavian identity still exist nowadays. They condemn actual political atmosphere and give their support to our party.

ICP: Your Party has a position different from the League of Communists of Yugoslavia concerning the USSR and the ideal of socialism. What are the sources of the legacy of the NKPJ?

AB: Right, we have a quite different stance from League of Communists of Yugoslavia. This stance mainly consists of principles regarding the construction of socialism.
As we own the position of Communist Party of Yugoslavia, we also say that the communist league which was established after 1948 by changing the party’s name is an opportunist and revisionist change and led them turn their back to the international communist movement.
After the twentieth congress, a revisionist period began in USSR, too. However, at the same time they showed a realistic opposition against imperialism during the Cold War. Yugoslavia chose to stand neutral in this class-based war. As Lenin says, every third way rejects the second one. Yugoslavian third way rejected the main dominant opposition. Thus, Tito’s Yugoslavia headed up the Non-Aligned Movement. By this stance, Yugoslavia has been aligned to imperialism and established the “little NATO” by collaborating with Turkey and Greece in the 50’s.
Tito and party cadres had organized the national sovereignty war heroically and triumphed with a revolution. The role of Tito in this historical period cannot be rejected. But unfortunately, they could not sustain the revolution that they established. In contrast, they played the “Trojan horse” role within the international communist movement and headed towards the restoration of capitalism.
Our tradition relies on social democrat party and their successors -the Communist Party of Yugoslavia, which sustained the claims on proletarian internationalism, III. International, Cominform and scientific socialism until 1948.