KKE stands for a united Cyprus 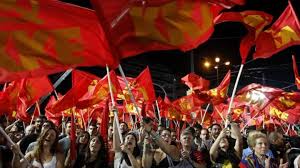 The CC of the  Communist Party of Greece (KKE) examined the overall developments on the Cyprus issue and came to a decision at the end of October. The Central Committee released a decision document covering a detailed political analyzes of the issue.

The KKE indicates that it takes "a responsible position" on the Cyprus problem and "has made a significant contribution to the denunciation of the Turkish invasion-occupation, to highlighting the international character of the problem, to expressing internationalist solidarity with the working class and popular strata of Cyprus, the Greek-Cypriots and Turkish-Cypriots, Armenians, Maronites and Latins."

The decision document covers a detailed political discussion and ends with "the basic axes of the position of the KKE" as follows:

"BASIC AXES OF THE POSITION OF THE KKE
The basis for the position of the KKE is the united interests of the working people of Cyprus as a whole, the necessity to coordinate the struggle of the working class and popular strata of Cyprus, Turkey and Greece, confronting the situation caused by the invasion-occupation from the standpoint of the class struggle in the direction of liberation from the shackles of capitalist exploitation.
Specifically, the position of the KKE on the Cyprus problem is determined by the following axes.
The Cyprus problem is an international problem of the invasion and occupation of the northern part of Cyprus by Turkey. It is marked by the intervention of NATO and the more general imperialist plans in the region. The international character also arises from the relevant decisions of the UN Security Council.
We are in favour of the withdrawal of the occupation forces and all the other foreign military forces from Cyprus and more generally we support the elimination of the consequences of the Turkish occupation, the end to the settlements, the right of refugees to return to their homes and the withdrawal of the settlers, taking into account social and humanitarian criteria.
We support the closure of the British bases and the abolition of the special status they have enjoyed for so many years.
The KKE considers that the struggle of the working class and popular strata must be directed to the goal of a Cyprus, where its people will be the masters, Greek-Cypriots and Turkish-Cypriots, Armenians, Latins and Maronites. A Cyprus united, independent, with one single sovereignty, one citizenship and international personality, without foreign bases and troops, without foreign guarantors and protectors.
For the KKE, a united Cyprus means:
--A united state formation: One state and not two states.
--The right to free movement, residence and stay of working class-popular families in all areas of the Island, without conditions and commitments, regardless of whether they are Turkish-Cypriots, Greek-Cypriots, Armenians, Maronites or Latins.
--Safeguarding of labour, social-security, social rights without discriminations. Respect for the right of all people to speak their language and for their children to be educated. Respect for the religious choices and cultural traditions.
On this basis, the position of the KKE for a united Cyprus fights against nationalism and ghettoization, which are caused by "bizonality" and the two "constituent states", and expresses the necessity for the united organization and joint struggle of the working class and popular strata of Cyprus, Greek-Cypriots and Turkish-Cypriots, Armenians, Latins and Maronites, against the bourgeois class, against the EU, against NATO.
The conflict against capitalist exploitation and the confrontation against the aggressiveness of capital, the struggle for goals that serve the contemporary needs of the people, even more so in the complex conditions of the sharpening inter-imperialist antagonisms and imperialist wars in our region, require the utilization of the experience that has been accumulated, the reinforcement of proletarian internationalism and the coordination of the  struggle of the working class and popular strata in Greece, Cyprus, Turkey and of other peoples in the region.
As a whole, the joint coordinated struggle of the working class and popular strata in Greece, Cyprus, Turkey and the other peoples of the region must be directed against the monopolies and the exploitative system, for workers'-people's power and the socialization of their wealth, for disengagement from the imperialist organizations, from the EU, from NATO, the formation of international relations, which will be based on mutual benefit. This is the basis for equal economic relations to the benefit of the peoples of different state entities.

October 2016
Central Committee of the KKE"

For the full text of the decision document see the link,

The letter is as follows:

Within the framework of comradeship and sincerity that must characterize the relations between our parties and with respect to the right of each party to set out its position as it itself deems correct on any issue on which it considers that it should state its position, the Political Bureau of the C.C of AKEL notes the following:

The Political Bureau of the C.C. of AKEL”