Joint announcement from TKP and KKE 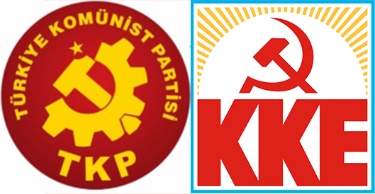 The CP of Turkey (TKP) and the CP of Greece (KKE) released a comprehensive joint announcement covering several issues including inter-imperialist competitions and regional escalations.
ICP, 29 April 2018
TKP and KKE released a comprehensive joint announcement in April, that was published in Rizospastis and soL news portal. The announcement covers several issues among which are the revelation of the competitions within the imperialist system, the denouncement of interventions of imperialism and war in the Middle East, including the trilateral attack of US, UK and France on Syria together with the support of NATO and the EU, anti-people policies of both countries' bourgeois governments, the Kurdish issue and the Cyprus issue. The announcement finalizes with a call to the peoples of both countries and  the region to strengthen the struggle against the exploitative capitalist-imperialist system and to strengthen the efforts for the class unity of the working class.
The announcement reads as follows:
1. The Communist Party of Turkey (TKP) and the Communist Party of Greece (KKE), on the event of International Workers’ Day 2018, send warm militant greetings to the working class, the peoples of both countries and our region, and we call upon them to strengthen their common struggle against the bourgeois governments and the anti-people policies, capital and its power, to massively condemn imperialist wars and to develop the struggle for the overthrow of capitalist barbarism, for socialism, which is the future of the peoples.

2. The KKE and the TKP struggle for labour, popular interests, rely on proletarian internationalism, international solidarity, and with these principles face the complex developments in our region.

The contradictions and competitions around the wealth-producing resources, energy pipelines, the conquest of markets and the control of strategically important areas, penetrate the imperialist system and are strongly manifested in our region forming the basis for the "hot spots", imperialist interventions and wars such as those in Syria, Libya, Iraq.

The USA, Russia, China, Germany, France, Britain and other EU Member States are leading the competition, involving a large number of capitalist states, including Turkey and Greece, in order to promote the interests of the bourgeoisie.

Both cooperation and competition between the bourgeoisie of Turkey and Greece serve their own interests and have nothing to do with the interests of the peoples.

4. Our parties express their deep concern about the developments in the Aegean and the Eastern Mediterranean and oppose any increase in hostilities and warfare. We express our opposition to border violations in the Aegean and the controversy over the international treaties that have established the borders in the region.

The KKE and the TKP support the position of not changing the borders and the treaties that define them and struggle for the disengagement of the two countries from imperialist plans, the return of military forces from NATO and other imperialist missions abroad, and demand NATO to withdraw from the Aegean Sea.

The peoples of Turkey and Greece have nothing that divides them and have an interest in demanding to live peacefully and to fight for their own future, to abolish exploitation of man by man.

5. Experience has shown that the two countries' participation in NATO and the expansion of this imperialist military center in the region is directed against the peoples and Peace and both CPs will continue their struggle for the disengagement of our countries from NATO.

6. The EU is a transnational association of capital and is constantly becoming more dangerous to the popular interests. Our parties are opposed to the integration of new countries in the EU, such as Turkey, and we support the right of each people to struggle for disengagement from this imperialist union, a goal for which the KKE has struggled consistently over time.

7. The KKE and the TKP condemn once again the imperialist wars in Afghanistan, Iraq, Libya and the 7-year bloody imperialist war conducted by the USA, NATO and the powerful EU states against the Syrian people, in competition with Russia and Iran, which has cost hundreds of thousands of dead and millions of refugees.

Our parties have denounced the imperialist pretexts about the confrontation of terrorism and have revealed that the criminal organization “Islamic State” and other similar organizations were created, funded and trained by the USA and their allies to promote imperialist projects in the region.

Our parties denounce the presence of Turkish military forces in Northern Syria and demand the immediate withdrawal of all foreign troops from Syria, supporting that developments in this country - as in every country - are a matter of its own people.

The TKP and the KKE are against the incitement of minority, real and non-existent issues, the rise in irredentism used to change the borders, and we call upon the communists of the region to take the lead against imperialist plans, nationalism and any “Great Idea” plans.

8. The KKE and the TKP express their solidarity with the Cypriot people, Turkish Cypriots and Greek Cypriots, and support a just and viable solution to the Cyprus Issue, with the withdrawal of the occupiers and all foreign troops, for an independent Cyprus with one sovereignty, one citizenship and an international personality, without foreign bases and troops, a common homeland for Turkish Cypriots, Greek Cypriots, Latins, Armenians and Maronites, without foreign guarantors and patrons.

9. Our parties express their solidarity with the people of Palestine which is struggling against Israeli occupation.

They condemn the provocative position of the USA that recognizes Jerusalem as the capital of Israel and the unacceptable attitude of the EU that identifies the "perpetrator" with the "victim". Our parties support the recognition of an independent, sovereign Palestinian state with East Jerusalem as its capital, on the borders of 1967.

10.The TKP and the KKE cooperate in the theoretical journal "International Communist Review", the "European Communist Initiative", the International and Regional Communist and Workers’ Parties meetings and, together with other Communist parties, will continue the effort to strengthen the unity and the struggle of the communist movement for its revolutionary regroupment.

Our parties address the peoples of the two countries, the peoples of the region, and we call upon them to strengthen the struggle against the exploitative system which generates crises, unemployment, poverty, refugees, educational-cultural degradation, interventions and imperialist wars. To strengthen the efforts for the class unity of the working class, the social alliance with the oppressed by the monopoly popular strata, to develop the class struggle, the struggle for the workers' power, for socialism, which in our day is more timely and necessary than ever.

Full texts of the joint announcement is available in Greek and in Turkish.