FGC: 'The workers will sweep you away' 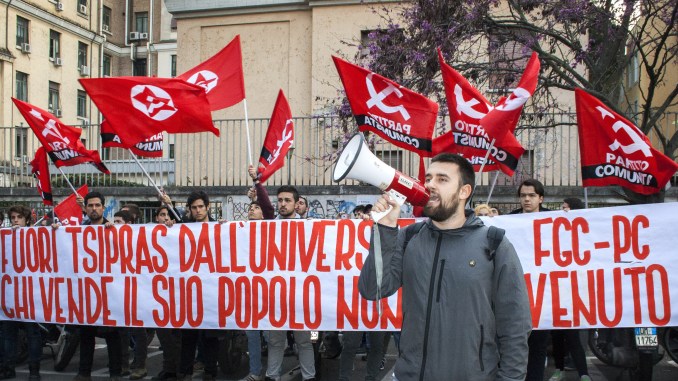 The Front of the Communist Youth (FGC) contests Tsipras during his visit at the University of La Sapienza in Rome.

Greek Prime Minister Alexis Tsipras attended a meeting promoted by the European Left Party under the title “a Europe of the people and for the people” at the University of La Sapienza, Rome.

According to the La Riscossa, the Front of the Communist Youth (FGC) spread posters and flyers saying: "Tsipras, Syriza, social democracy: the workers will sweep you away"; " Who sells his own people is not welcome, Tsipras out of La Sapienza" prior to the arrival of the Greek PM to the University of La Sapienza. . A delegation of the Communist Party, Italy was also present at the demonstration which was held to protest Tsipras's visit.

"We will not accept  Tsipras to come  in our university and  give us lessons and tell us about a “Europian Union of the People” which does not exist" declared  Lorenzo Lang, national secretary of the FGC. "Syriza in Greece did what all the European governments did, it carried on the anti-popular policies  imposed by Troika (ECB, EU, IMF). It took the place of the former centre-left , with respect to which is even more dangerous because it creates new illusions for the workers and for the youth. For instance the referendum of summer 2015 about the Third Memorandum was a  fraud, because the “alternative” proposal of Tsipras  was almost identical to the one of the European Central Bank, in fact it helped to show as “democratic” the unfair choice to the Greek people, which will be soon strike by a fourth memorandum... Tsipras sold  the illusion of the reformability of this system and the European Union, to the people of Greece " continued Lang, and concluded by saying:

" The Communist Party of Greece ( KKE)  has refused from the beginning any alliance with SYRIZA, denouncing its true nature,  and today KKE is conquering  always wider consents being the only political force which coherently opposes  the anti-popular measures of the European Union, International Monetary Found and European Central Bank, mobilizing  tens of thousands of workers and students. Today we are here to confirm our support to the struggle of the KKE and the Communist Youth of Greece (KNE), the workers and the youth that in Greece are struggling for their own rights and their future, against the government of Tsipras and against this system, for the exit from the European Union and the conquest of popular power."