ECI: Day of international struggle against capitalism, for socialism-communism 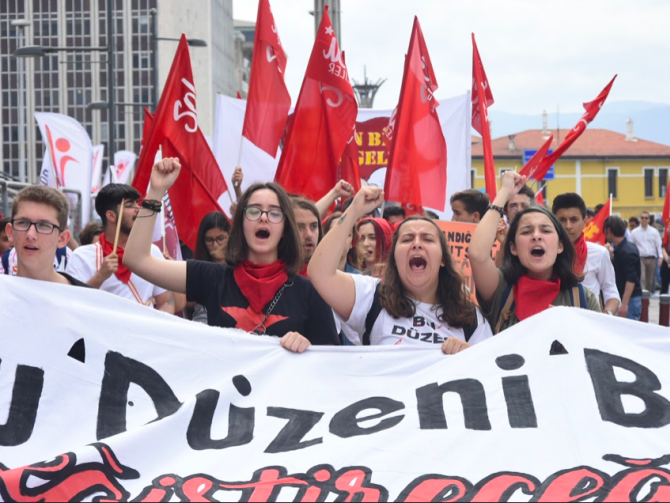 European Communist Initiative honoured May Day.
ICP, 4 May 2019
Like every year, millions of workers celebrated May Day with spectacular demonstrations all around the world. The European Initiative of Communist and Workers' Parties (ECI) issued a statement to honour Labour Day, the workers who died in Chicago in 1886, and all unyielding fighters of the class struggle.
In the statement, it is indicated that the capital tries to conceal the fact that "the impoverishment of the working masses internationally and the growing inequalities between rich and poor, as well as between countries with different levels of development, are the result of the division of society into classes and of the process of capitalist accumulation." While hiding the real causes of the problems, the capital uses nationalism - racism as a weapon of "mass distraction," to divert the correct popular indignation towards directions that perpetuate capitalism. "On May 1st, we reiterate once again the solidarity of the communists and the labour movement with immigrant proletarians," the statement continues. "The class enemy is not the immigrant, but the capitalist. It is the capitalist who fires, who reduces wages, who imposes inhuman working conditions. The way out can only be found in class unity and equality of rights for all workers, both native and immigrants."
The Initiative denounces the "opportunism of social-democracy, of the collaborationist trade unionists and their compromised leadership, who act to defuse the people’s discontent and only help to guarantee the survival of a dying system." Instead, the Initiative declares that hope lies in the class struggle, in the organization and regroupment of the workers' movement.
It is reminded that this year May 1st coincides with the beginning of the European election campaign. It is boldly underlined that the EU is not improving, it can only be worse, more anti-popular and reactionary. Thus is reiterated the need to break the chains that hold us prisoner, intensify the struggle against the EU and NATO, the political-military institutions of European imperialism that guarantee the domination of capital to the detriment of workers and peoples.
The statement ends as follows:
"We must concentrate our action against the EU and NATO, starting from this May 1st, a day from which a new season of proletarian struggles must start for the claiming of labour rights, the overthrow of capitalism, for socialism-communism. On the occasion of this May 1st the Communists greet and express internationalist solidarity with the workers of Europe and all over the world, who are everywhere engaged in the struggle for their rights and their emancipation from the shackles of the capitalist system.
Long live May 1st! Proletarians of the world, unite!"
See the link for full text.
Tweet