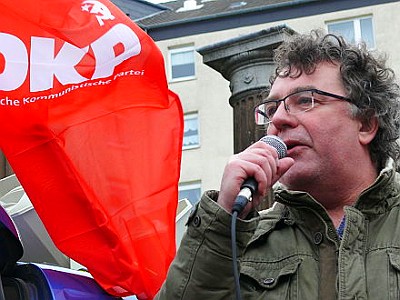 Following the completion of the negotiations between the SPD and CDU/CSU in Germany, chair of German Communist Party (DKP) Patrik Köbele has shared a press release, regarding the outcome. Köbele called for democrats to reject the grand coalition appeal.

The chair of German Communist Party (DKP) Patrik Köbele commenced his analysis with clarifying that SPD is wanted to have its place in the government. Especially some of the ministerial positions were appointed as if “good bait catching fine fish”, to convince the members of SPD and influence their decision in the upcoming days to get an approval.

Historical role of social democrats in the aggression of German capitalism

He reminded a historical truth, that “Whenever the ruling class incorporates the social democrats in their government, that of the ‘ideal collection of capitalists’, dramatic intensification of the aggression of German capitalism emerges- inside and out of the country”.

Köbele points out the common reaction of these mainstream parties of Germany when it comes to militarization and increasing the military expenses: “The weapon industry should be ‘consolidated and promoted’, the military forces should be armed with drones. Likewise was agreed upon the expansion of German troops in Mali and Afghanistan.” Similarly, the grand coalition parties got along with equipping intelligence officers and police with more weapons - forced by the appointment of Horst Seehofer from CSU as the Minister of Interior.

Democrats should say “No”

“Without the pressure from the streets, without movement of masses against militarization” he interpreted the agenda of the potential coalition, which includes the doubling of military expenses over 2% of GDP according to NATO criteria and war politics, as alarming. “To develop such a pressure is the urgent duty of all democrats”. As now the negotiations have reached a conclusion and SPD will need to get consent of their more than 460.000 members to build up the grand coalition parliament together with Christian Democrats, DKP chair Köbele is calling for the social democrats to say “No”, as a first step of their duty.

The SPD members will decide between Feb 20 to March 2 whether the coalition agreement becomes effective or not.