CP of Ireland: ‘Repeal the 8th Amendment for women’s full and equal citizenship’ 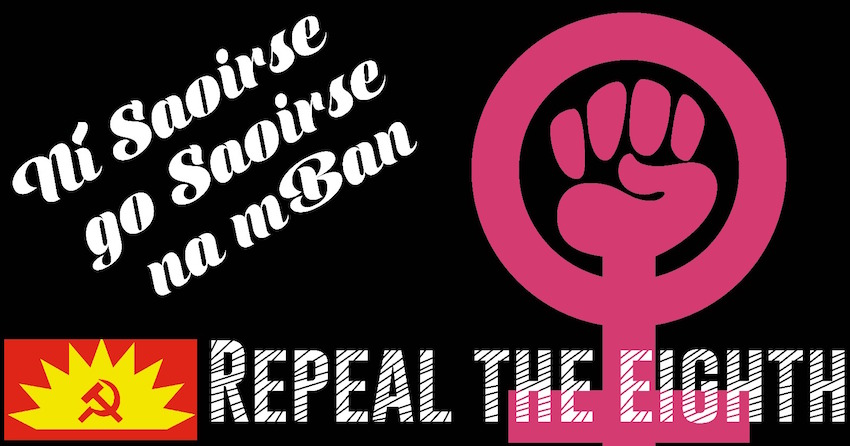 The Communist Party of Ireland issued a statement on the referendum regarding the anti-woman 8th Amendment of the Constitution.

The Communist of Ireland (CPI) issued a statement on April 11th under the title ‘Repeal the 8th!’ on the referendum on May 25th about removing the clause added to the Constitution of Ireland by the 8th Amendment. The 8th Amendment removes the capacity of a pregnant woman to make the best medical decisions in accordance with her own personal or medical needs and restricts the ability of medical professionals to make life-saving interventions. The statement referred to the case of Savita Halappanavar where the doctors had abstained from making an abortion due to the 8th Amendment leading to Savita’s death. The statement said, ‘Over the thirty-five years that this clause has been in operation it has shown itself to be anti-woman as well as unworkable, and to have placed women’s lives in danger.’

According to the statement, there are many aspects of medicine and medical care, other than abortion, that the 8th Amendment influences: ‘A woman with a diagnosis of cancer must submit to a pregnancy test before each treatment. If this test proves positive she will be denied chemotherapy and radiotherapy, because of the impact on the developing foetus.’  The CPI reminded the anti-choicers' argument that the Protection of Life During Pregnancy Act means ‘in the most severe cases a woman’s life will be saved’, but emphasized that the two referandums on the topic limiting the conditions of abortion makes it impossible to put it into practice.

The statement of the CPI went as follows:

‘For thirty-five years the 8th Amendment has held women hostage to the whims of an outdated and patriarchal notion that they do not know what is best for themselves and must be protected from their own decisions. We must stand with the women of our class and trust in their own ability to think for themselves.

‘When more than half of all women workers are earning less than €20,000 a year, and with an abortion in England costing between €850 and €2,000, we are asking women already hit hardest by the growing precariousness in work and housing to bear the cost of a standard and necessary medical procedure that should be available in their own country. It is not enough that only women with money or the ability to beg, borrow or steal it have the choice whether to have children or not.

‘Those who feel that their hand has been forced are threatened with fourteen years’ imprisonment for taking abortion pills purchased on line. Mifepristone is listed by the World Health Organisation as an essential medicine for safe early-term abortions but is not available to the women of Ireland, which forces them into criminality or to later-term abortions in England when they have gathered enough money together.

‘Pregnancy is not easy for any woman, and it is made all the more difficult knowing that her ability to make a decision in the case of emergency or difficulties during her pregnancy is severely curtailed by the 8th Amendment.

‘The repeal of the 8th Amendment gives women a choice about what they need to do, gives them a choice regarding their future. Repealing the 8th will restore some degree of medical balance between women and men. Men would not accept that, if they had difficulties, certain medical procedures would be withheld from them because of their gender.
‘Repealing the 8th Amendment is a necessary first step towards allowing women full and equal citizenship. It will remove a major obstacle to independent decision-making for a woman regarding her body, her life, and her future. Repeal needs to happen so that women can make their own choices and have those choices respected and vindicated in law. Women need to be trusted, and therefore they need repeal.’