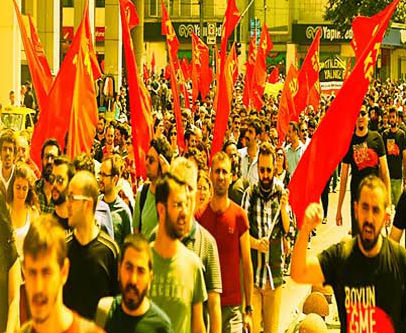 Communist Youth, Turkey declares the necessity of a political line which rejects any “fake hopes” under the disguise of “anti-AKP front”.

Communist Youth, Turkey (CYT) released a declaration calling the youth of Turkey to join its ranks in the struggle.

CYT considers the current political situation in Turkey as "an operation of “horse swap” which is conducted by the Turkish capitalist class and the imperialists, is in proses, so the anti-AKP paradigm cannot be useful anymore to the struggle for socialism".

CYT says they have been crying out that AKP government had to be changed since June 2013. Although knowing that there are some amongst the imperialists and capitalists who also share anti-AKP interests, CYT states the main issue as; in what way will this change happen?” and calls youth not to fall for the delusion of democratisation.

Young communists of Turkey, claim  the interests of the student youth within the ranks of working class and class struggle.

The declaration continues as follows:

“University students make part of the working class. It is not a coincidence that we have to face this reality within our education life. Working day and night to afford our education expenses without  job security or health insurance. Making translations, giving private lessons, working as a cashier in a supermarket, working as a bartender, working in construction, we don't makea different class but the working class. We also face the exploitation of this system, in some cases even by losing our lives just like our student friends who died while working in constructions to earn their living.
As the university youth, we have some important tasks in order to overthrow this insane system of exploitation, to establish a system without work “accidents”, discrimination, or reactionism.
Communist Youth, appeals to form a communist generation to destroy capitalism and its order of exploitation. A generation that will defend the intellectual, advanced “new humanity” of socialism against the evil and selfish individuals of the capitalism. A communist generation, which will prove that an equal and free system can be established, which will lead its people...
We recall our history, dream our future.”