'For a bright 2018 The Communist Party of Turkey declares that...' 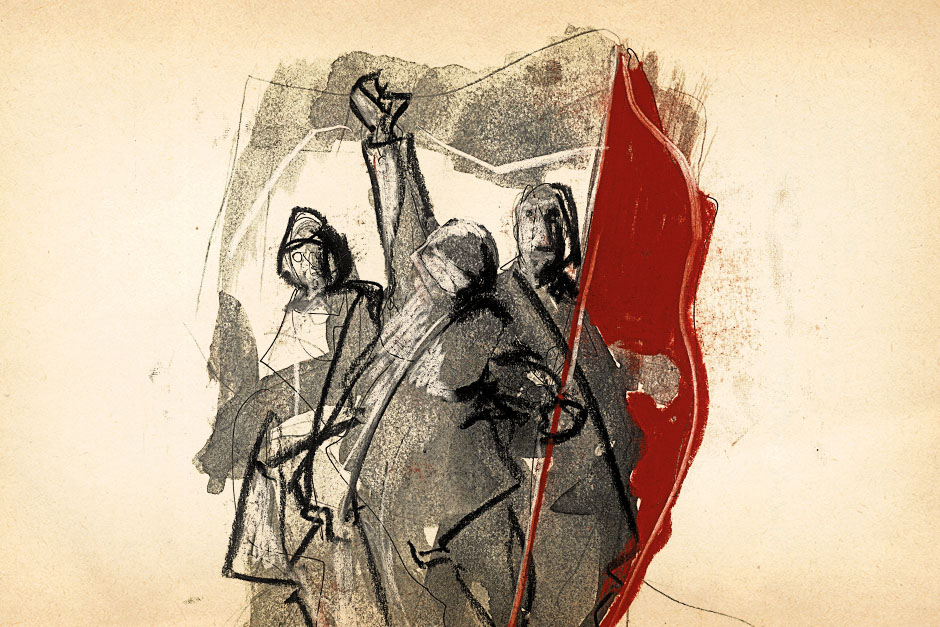 Communist Party of Turkey (TKP) released a comprehensive public declaration calling on the working people to get organized within the party to strengthen the people’s true alternative.

According to the newsportal soL, the Communist Party of Turkey released a comprehensive public declaration on January 15 with the titlle 'In order to enlighten 2018, TKP says that...', calling on the working people to get organized with the party in order to strengthen the people’s true alternative amid the political chaos in the country.

Indicating to the current situation of the worldwide imperialist system, the TKP declaration says, "It has been revealed that the world’s super power U.S. President Trump watches T.V., and eats hamburger all the day for fear of being poisoned. What a big dilemma!"

The TKP puts forth that Donald Trump is the most suitable personality to represent today's imperialist world order since the current system is based on inequalities, unfair distribution of income, starvation, poverty, unemployment, intense exploitation, environmental damage, crazy armament, the threat of nuclear war, racism and religious fundamentalism.

The TKP declaration states that although Turkey does not deserve the Justice and Development Party (AKP) government, this party suits to the existing order of the country very well under capitalist conditions.

"It is not surprising," the TKP says, pointing out to the interior minister, who orders the police to "break the drug dealers' legs" in an unlawful attempt, as a member of the AKP government that attacks workers who raise their voices for their trade union rights.

As Turkey's Religious Affairs Directorate (Diyanet) dares to give fatwas saying that "9-year-old children could marry", the TKP emphasizes that all the bourgeois parties have played role in the emergence of such scandals, considering that, apart from the AKP party and its right-hand fascist MHP party, the parliamentary main opposition Republican People’s Party (CHP) defines secularism as the "freedom of faith and praying" or the pro-Kurdish Peoples' Democratic Party (HDP) commemorates Islamic religious figures, eventually undermining the basis of secularism.

Setting forth that there is no other capitalism, market economy or imperialism, the TKP calls on all the people to struggle with the party for the bright future of the country, adding that it is the responsibility of the communist party to warn those who dream about "fleeing from the country under the AKP rule" or "waiting for other forces to save the country".

U.S. MUST BE KICKED OUT FROM TURKEY

"Turkey must be saved from the U.S., its military existence and bases, its intelligence organizations, its political impositions, its threats of coups, and from NATO," the TKP says, but emphasizes that without getting rid of the country's capitalist class that cooperates with the U.S., it would be impossible to kick out such imperialist forces from the country.

The TKP vows that it will launch an assertive and widespread campaign along with patriotic people for exiting from NATO and shutting down the entire foreign military bases in Turkey, reminding that President Recep Tayyip Erdoğan’s and his party’s discourse against the U.S. is just fake and demagogic.

"Imperialism is not only composed of the U.S. Imperialism is the name of today's world order, and the powerful actors of the system from the European Union countries to the Russian Federation, from China to Japan are all in a cut-throat competition," the TKP declaration says, adding that this is what leads to regional wars.

"There is no good imperialist," the communist party notes, pointing out the role of Turkey’s capitalist class that drags the country into a bloody game in search for new fields of market and investment in the region.

AKP IS THE CONTINUATION OF FORMER BOURGEOIS GOVERNMENTS

Reminding that the AKP government is no different than former bourgeois governments in exploiting the workers and eliminating their rights to strike, as one percent of the population, the capitalists, seize most of the country’s richness, the TKP warns the working people to not to generate hope from the intra-bourgeois political tensions.

The TKP emphasizes that the tension between Erdoğan and his predecessor Abdullah Gül, the position of the CHP party or the new 'Good Party' under the lead of ultra-nationalist Meral Akşener would not change the rule of exploitative capitalist class.

"When the working class said in the past, 'We want the power, the workers will rule the country,' the capitalists had to step back. Thus the 8-hour workday, the right to collective bargaining with trade unions and social security system were provided, thus many countries enabled free system of education and health," the TKP statement says, adding that only when the working people get organized and seek power, they can protect their acquired rights.

STRUGGLE FOR ENLIGHTENMENT AS PART OF ANTI-CAPITALIST STRUGGLE

Referring to the historical progress in Turkey, the TKP states that reactionary forces were defeated in 1908 and 1923 when the obsolete Ottoman Empire collapsed and the modern Republic of Turkey was established.

"Reactionism was supported by imperialists, particularly the U.S. and Germany, in order to put an end to the rise of socialism and the workers' movement in Turkey and the region," the declaration says, adding that the TKP sees the struggle for Enlightenment as part of the struggle against capitalism and imperialism.

The TKP underlines that Turkey will witness three important elections in the near future, however, adding that relying on the elections alone would mean suicide for the people, considering that the elections in Turkey are open to the AKP-government-led manipulations.

"The pro-establishment opposition has also accepted this situation and focused on the presidential election. Everyone is searching for a 'person' who will defeat Erdoğan. This, however, would entrap the Turkish society. Politics based on one single person would completely passivize the people," the TKP remarks, adding that unorganized people always lose as many bourgeois alternatives to Erdoğan’s party are vainly portrayed as a "recipe for emancipation".

Declaring that working people’s emancipation will not come with elections alone, the TKP says that it will create the people’s true alternative during the elections despite the government’s repression and bans.

The TKP will launch a campaign between January 20 and February 20 to organize new party members along with new party buildings across the country. The party calls on the working people to attend the party events that will be held in commemoration of the 15 initial founders and members of the TKP, who were murdered in the year of 1920 during the anti-imperialist war waged in Anatolia.

"Turkey is not helpless, the people’s true alternative will be strengthened," the TKP declaration concludes.