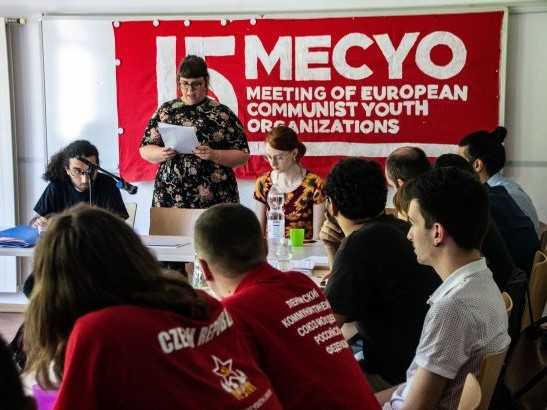 The 15th Meeting of European Communist Youth Organizations took place in Linz, Austria.
ICP, 3 July 2019
The Meeting of European Communist Youth Organizations (MECYO) is an important annual initiative to increase the exchange and discussion between communist youth organization struggling in Europe. The 15th MECYO took place in Linz, Austria, on June 29-30 with the participation of 17 communist youth organizations. This year, the meeting was hosted by the Communist Youth of Austria (KJÖ), in coordination with the Party of Labour of Austria (PdA).
On June 29, a seminar was organized with the motive for exchanging "experience and conclusions drawn from the struggle of the Communist Youth Organizations in the pupils’, students’ and workers’ movement for the peoples’ contemporary needs." The seminar took off with the greeting messages expressed on behalf of the KJÖ and PdA and continued with the comradely exchange of particular experiences from different revolutionary struggles from all around Europe.
Here is the list of the 17 organizations that participated in the 15th MECYO:
Communist Youth of Austria - KJÖ
United Democratic Youth Organization - EDON, Cyprus
Communist Youth Union - KSM, Czech Republic
Youth of the Communist Workers' Party of Finland
Movement of Young Communists of France - MJCF
Socialist German Worker Youth - SDAJ
Communist Youth of Greece - KNE
Connolly Youth Movement - CYM, Ireland
Front of Communist Youth - FGC, Italy
Movement of Young Communists - CJB, Netherlands
Portuguese Communist Youth - JCP
Leninist Communist Youth Union of Russian Federation - LKSM RF
Young Communist League of Yugoslavia - SKOJ, Serbia
Collectives of Young Communists - CJC, Spain
Communist Youth Union of Spain - UJCE
Communist Youth of Catalonia - JCC
Communist Youth of Turkey - TKG
Following the seminar, most of the participant organizations undersigned a common declaration. The declaration prescribes, "One hundred years after the murder of Rosa Luxemburg and Karl Liebknecht the CYOs of Europe, the forefront of the youth, we struggle against the intensifying attacks of capital and for our rights and interests. All over Europe, we can observe that the dictatorship of capital and the monopolies is undoubtedly showing its face." The declaration describes the EU as "an advanced form of capitalist interstate integration, an imperialist alliance with partial conflicting interests internally" which plays an important role also in enforcing the anti-people policies that target the youth, the working class and the popular strata. It is declared, "We, the CYOs, continue to fight for a radical line of recovery and reinforcement of the communist and workers’ movement all over Europe, away from the deadly embrace of social-democracy, the beautification of the EU or the illusion of fixing it for the benefit of the popular interests, while they are implementing together with the right-wing and the neoliberal the reactionary and anti-people measures." The declaration ends with a quote from Rosa Luxemburg: “You foolish lackeys! Your “order” is built on sand. Tomorrow the revolution will “rise up again, clashing its weapons,” and to your horror it will proclaim with trumpets blazing: I was, I am, I shall be!”
Tweet