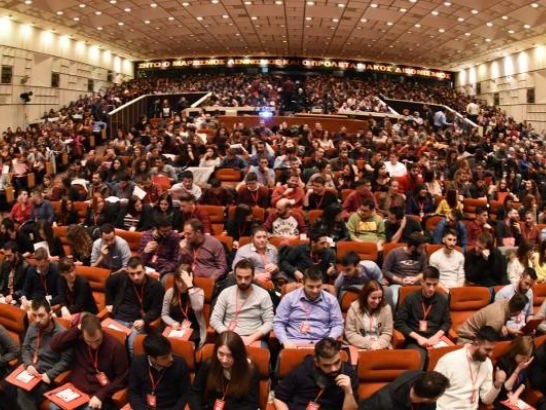 Communist Youth of Greece convened its 12th congress with great enthusiasm.
ICP, 20 February 2019
The 12th Congress of the Communist Youth of Greece (KNE) was convened in Athens on February 15-17. In addition to more than 400 delegates from various branches of the KNE, international delegates representing 30 communist and anti-imperialist youth organizations from around the world and a large delegation from the Communist Party of Greece (KKE) participated in the Congress.
The Congress began with the speech of Nikos Abatielos, Secretary of the Central Council of the KNE, who underlined the KNE's struggle for revealing the truth behind old and new illusions that social democrats, liberals and opportunists engender in the eyes of the youth. Despite the SYRIZA's optimistic claims about the end of the crisis in Greece, Abatielos put forward that the last decade has not led to any amelioration for the working class and that the government's policies were decided by capitalist organizations. During the sessions, activities of the KNE and the youth's political mobilization were discussed in detail, as well as the political situation in Greece on the eve of the upcoming elections. After the discussions, the new Central Council was unanimously elected.
On February 16, a special political and cultural event was organized by the KNE for solidarity with the people of Venezuela. The first speaker was the GS of the Communist Youth of Venezuela (JCV) Janohi Rosas, who asserted that the reason why Venezuela encounters so many aggressions is the anti-imperialist course of the country. Rosas added that the promotion of right-wing and fascist forces in the world would be opposed everywhere by communists and the working class movement. After this first speech, Nikos Zaharopoulos, Member of the CC of the KNE, condemned the imperialist intervention of the US-NATO-EU towards Venezuela. Zaharopoulos expressed their support for the right of the peoples to determine their future against any military intervention or coup tentatives masked by discourses for "diplomatic mediation" and by calls for "free and democratic electoral process". The last speech was made by Freddy Jesus Fernandes Tores, representing the Venezuelan Embassy to Athens, who expressed his honour for witnessing the solidarity events organized by the KKE and KNE. The event continued with the concert chanting songs about the common struggle of the peoples.
On February 18, a political event was organized in the Faculty of Law of University of Athens, where delegates from the Communist Youth of Turkey (TKG) took the floor. Students from the Turkish Studies Department discussed the situation faced by the working class and youth in Turkey as well as the recent political developments and the historical background that they possess.
Tweet