Tudeh: Condemning terrorism in any shape and form 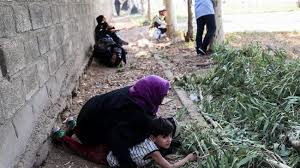 The CC of the Tudeh Party of Iran released a statement condeming the terrorist attack  in the city of Ahvaz.

On SAturday 22th September, at least 29 people, including children, have been killed and more than 50 wounded in a terrorist attack on a military parade in south-west Iran, responsibility for which has been claimed by both Islamic State and a separatist group. Four assailants disguised as military personnel opened fire from behind the viewing platform during the parade in Ahvaz to mark the anniversary of the eight-year war with Iraq in the 1980s.

The Central Comittee of the Tudeh PArty of Iran released a statement after the attacks condemning any form of terrorism and expressing its support for the rights-demanding movement of the working people of Khuzestan.

The full statement of th eCC of Tudeh is as follows:

According to media reports - this morning, Saturday 22 September - at least 25 people were killed and more than 50 wounded in an armed terrorist attack on a military parade of the armed forces of the I.R. of Iran in the city of Ahvaz, itself marking the 38th anniversary of the start of Iran-Iraq war. A number of the dead and wounded were civilians and ordinary spectators. The Tudeh Party of Iran condemns this terrorist act in the strongest terms.
According to the media reports, the “Arab Struggle Movement for the Liberation of Ahvaz” (Habib Nebgan faction) - which is supported by Saudi Arabia and Bahrain - perpetrated this attack. Also, the criminal organisation ISIS (DAESH) released a statement on its website “Al-A’amaagh” and claimed that its infiltrated covert forces, infiltrated to the province of Khuzestan, took part in this terrorist attack.
The Tudeh Party of Iran believes that criminal and terrorist operations such as the one executed this morning in Ahvaz, regardless of the claims and “justifications” of its organisers, and at a time when Israel and Saudi Arabia - as proxies of the racist and right-wing government of the United States - are trying to further stoke tensions in the region and around Iran and to instigate a new war, could seriously threaten the security of our country. Terrorist attacks in the already sensitive region of Khuzestan, in a situation where the popular movement of the ordinary and working people has been growing unprecedently in recent months and which has clearly exposed the social-political bankruptcy of the criminal theocratic ruling regime in Iran, could be cynically exploited by the police and security forces of the regime - even more than before - to intensify their crackdown and boost suppression in Khuzestan and increase the tensions so as to counter the popular movement and the bankruptcy of the regime.
Condemning terrorism in any shape and form manifestation, including today’s terrorist attack in Ahvaz, the Tudeh Party of Iran expresses its support for the rights-demanding movement of the working people of Khuzestan, and calls upon all the patriotic, democratic and progressive forces of the country to join forces in their efforts and resolve to organise a united and consolidated struggle in support and defence of the demands of our nation for peace, freedom, democratic rights, sovereignty and social justice.
22 September 2018
The Central Committee of the Tudeh Party of Iran"