TPI: ‘It is you that are anti-revolution!’ 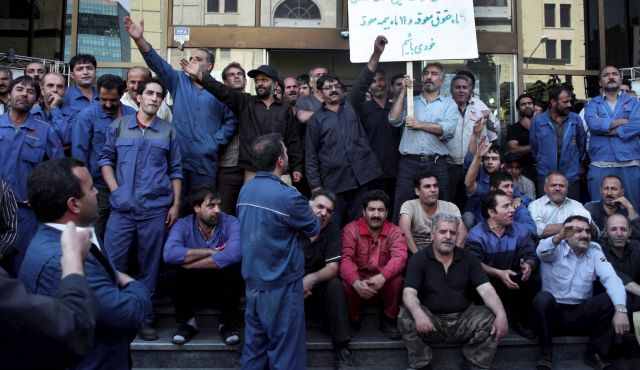 Tudeh Party of Iran (TPI) greeted the struggle of the workers of the National Steel Company and responded to Khamenei saying that ‘the theocratic regime is itself anti-revolution’.

The Tudeh Party of Iran (TPI) issued a statement on February 26, 2018, greeting the struggle of the workers of the National Steel Company and the working people’s uprising around the country. It responded to the speech of Khamenei about workers’ support to the so-called ‘revolution’ and reminded that that theocratic regime it itself ‘anti-revolution’.

The statement mentioned the speech of Supreme Leader Ali Khamenei on February 2nd, who had addressed the “organisers of the ceremony honouring martyrs of the workers’ community” which is a pro-regime outfit connected to the regime’s ‘Popular Mobilisation’ militia forces. In his speech Khamenei had reacted to the escalating labour protests which were trigerred by the oppression by the theocratic regime and the grand capitalists.

The Supreme Leader had underlined in the speech that the presence of workers were significant ‘during the revolution years’ and that they were now being targeted by the ‘anti-revolution forces... to provoke them against the Islamic Republic’. One of the main acts of our enemies, he said, is to ‘create slow down or slump in our labour complexes [factories], particularly in the large factories… forcing the workers to do so.’

Referring to Khamenei’ speech, the TPI reminded that the definition of anti-revolutionary is ‘the force that diverted the revolution from the path of its core slogans for freedom, independence and sovereignty and social justice, and which has imposed a medieval and despotic theocratic regime on the nation.’

The statement continued: ‘The anti-revolution is those forces that promised the rule of the “underprivileged” against the “privileged”, but today whose heads and leaders have amassed billions of dollars ransacked from the national resources of the nation, who are living lavish lifestyles in palaces guarded by thousands-strong security forces and who have made the life for millions of the working people of the countrymiserable.

‘The anti-revolutionaries are those whose macro-economic programs in support of grand capitalists have turned the productive and economic state of the nation into such a disaster as it is today. Anti-revolutionaries are those who, contrary to their promises, deprived the workers of their basic rights - such as the establishing of independent trade unions - and who have tortured hundreds of trade union rights activists and imprisoned them in their dungeons.’

In its statement, the TPI pointed out that the expressions of Khamenei reveal the fear from the growing peoples’ protests, particularly the protests by the working class of Iran in the period since the early-January 2018 uprisings. According to the statement, Khamenei’s ultimate objective is ‘to eliminate the factor of the presence of the masses - and in particular the working class and toilers- from the equations that make up the political arena of the country.’

It was reminded in the statement that the plenum of the Central Committee of the Tudeh Party of Iran in early February had pointed out that the developments ensuing the right-seeking struggles of our people in recent decades had ‘notably changed the face of the country’. The TPI reiterated that ‘the class base of the theocratic regime .... has been that of grand capitalism’.

The statement went as follows:

‘The ever-growing monopoly of power and political-economic affluence in the hands of a handful of mercantile capitalists (mercantile bourgeoisie) and the bureaucratic capitalism (bureaucratic bourgeoisie) nurtured in the deeply corrupt ruling system and, under its protective umbrella, the destruction and winding-up of a significant portion of the productive industries, driving a large swathe of the middle strata of society towards the boundaries of deprivation and poverty, paints a different picture of our society.

‘In addition, the suffering of millions of working people - to the extent that it is defined even by sources within the Islamic Republic regime as falling below the poverty-line- the rapid collapse of the social base of the regime and the ever-growing discontent of the masses and their willingness to challenge the theocratic regime, draw the main lines of this picture.’

The TPI indicated to the broad and continuing participation of the teachers and education workers in the protest; the unprecedented strike of the Hepco and Azar-Aab workers and their march in the streets of the industrial city of Arak; the protest of the workers and employees of the of the Persian Gulf International Transport Company; the unprecedented fervent general strike of the Haft Tappeh sugarcane workers; the strike of more than 3,500 workers of National Steel Company in Ahvaz city and their heroic march in recent days, are just a few examples in the last few months.

·       Payment of unpaid wages of the workers that have been delayed for months;

·       Setting the minimum wage based on the costs of the basket of essential goods and services for a working family and the real rate of inflation;

·       Job security and an end to temporary and white contracts;

·       Recognitionof the rights of the workers to establish their independent trade unions;

·       Securing the retirement pay and social security pay for the workers.