'Stop the Destruction of the State of Jammu & Kashmir' 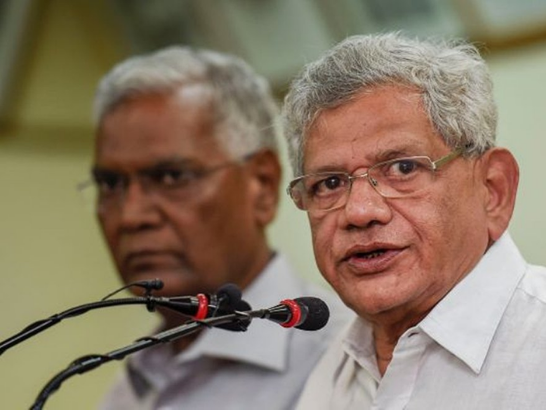 Tension increasing in Jammu & Kashmir, communist leaders detained at Srinagar Airport.
ICP, 10 August 2019
The Modi government in India unilaterally scrapped Article 370 and other provisions of the Constitution and divided the state of Jammu & Kashmir. On August 5, Indian Left parties, including the Communist Party of India (CPI) and Communist Party of India (Marxist), issued a common statement on the dismantling of the State of Jammu & Kashmir. The Parties put forward that the Modi government has completely negated the assurance made by the Indian government to the people of Jammu & Kashmir. They consider this step as an assault on federalism, a fundamental feature of the Indian Constitution. The undersigned parties assume that the RSS/BJP cannot tolerate any diversity and are converting Jammu-Kashmir and Ladakh as two separate centrally administered Union Territories.
"This is a betrayal of all promises," the statement reads, "repeated ad nauseam by the Central government over the years, of upholding Kashmiriyat, Jamhooriyat (democracy) and Insaniyat (humanism). The strengthening of the bonds of the people of Jammu & Kashmir with the rest of India can only be through the process of political dialogue with all stakeholders, as promised by the government three years ago. Instead, this undemocratic unilateral step will only deepen the alienation. This is harmful for the unity and integrity of India."

The Left parties call upon the people of India to strongly protest against these illegal and unconstitutional methods employed by the Modi Government. "These are not issues confined to Jammu & Kashmir alone," they add, "They constitute an attack on democracy, federalism and the constitutional order."

On August 6, the Communist Party of Bangladesh (CPB) expressed its serious concern over rapidly increasing tension in Jammu and Kashmir through a press release. CPB President Mujahidul Islam Selim and General Secretary Md. Shah Alam said that the ongoing crisis in Jammu and Kashmir state has created a grave threat to the stability of Bangladesh and the subcontinent as a whole. They said, this crisis will accelerate tension and arms race between India and Pakistan. At the same time, by taking the advantage of this crisis imperialist and communal forces will make the situation complex and misleading. Consequently, the situation will turn into more complicated and conflicting condition. Therefore, for the sake of peace and security of the people of each country of this region and to respect decade long struggle of Kashmiri people, it is very necessary to resolve the crisis through a meaningful dialogue involving all concerned sections. Also the crisis should be resolved by guaranteeing more democracy instead of repression, keeping the ongoing special constitutional status of Jammu and Kashmir intact, holding high the secular principles of Indian constitution and maintaining the ethnic diversity of India. CPB leaders said, Communist, Progressive and Democratic forces of India and ordinary Indian citizens are strongly opposing the recent step of Indian government on Jammu and Kashmir situation and they are agitating in all over the India. The CPB extended its heartfelt solidarity to this just struggle of Indian Left and Progressive forces.

On August 9, the CPI declared that Com. D. Raja, General Secretary of CPI and Com Sitaram Yechury, General Secretary of CPI (M), who were on their way to meet Com. Tarigami, MLA of Jammu & Kashmir Assembly, were detained by the security forces at Srinagar Airport. Reminding that both the Communist leaders had written a letter earlier to the Governor; Jammu & Kashmir that they would like to meet the party leaders and activists at Kashmir valley, the CPI condemned the detention as undemocratic and despicable. The Party demanded, "Prime Minister Narendra Modi yesterday in his broadcast to the nation claimed that there is normalcy in the Jammu & Kashmir and people are happy with the decision of abolition of article 370 and 35A. If it is true then why the national leaders are not allowed meeting the people of J & K. The whole Jammu & Kashmir is under seize with tens of thousands of security forces and they are parading in the streets of towns, villages and undemocratic curfew is in existence. This reflects the reality."

The CPI condemned the arrest of D Raja and Sitaram Yechury, who should be allowed to meet the party leaders, activists and people of the state, and demanded their immediate release. The CPI(M) also condemned the arrest as an indicator of the authoritarian face of the BJP government. After four hours of detention at the airport, Yechury and Raja were sent back to Delhi.

On August 12, the International Department of the Communist Party of Pakistan released a statement on the Kashmir question. The Party declared that the last developments paved the way for India to transform into a fascist despotic state, raising gravious concern for the Indian Secular democratic morphology. The Party strongly condemned this undemocratic move of the RSS and BJP government. According to the CP of Pakistan, this situation will trigger the escalation of religious fanaticism, terrorism and jingoism in the region. And all the public developmental resources will be swallowed by arms race which will bring more miseries and distitudes upon the poor people in both the countries, India and Pakistan alike. The CP of Pakistan underscored that the unfortunately indengenous freedom struggle of the people of Kashmir is hijacked by the international actors and its local fundamentalist shenanigans by making it to be a proxy war of Pakistan against India and the ruthless brutality by the Indian Government is considered as a retaliation to that effect. Criticizing the speeches of the Pakistani PM Imran khan and establishment representatives, the Party strongly condemned war mongering and appealed to peace-loving forces of the world and region in particular to help restrain both countries from armed conflicts and let the people of Kashmir excercise their right to self-determination. The Party also expressed solidarity with all the left forces of India CPI and CPI(M) who have launched a strong protest against the BJP government on Kashmir Policy.

See the link for the common statement of the Indian Left parties.

See the link for the press release of the CPB.

See the link for the press release of the CPI on the detention of the party leaders.