CPs of India respond to the fascist attacks in Tripura 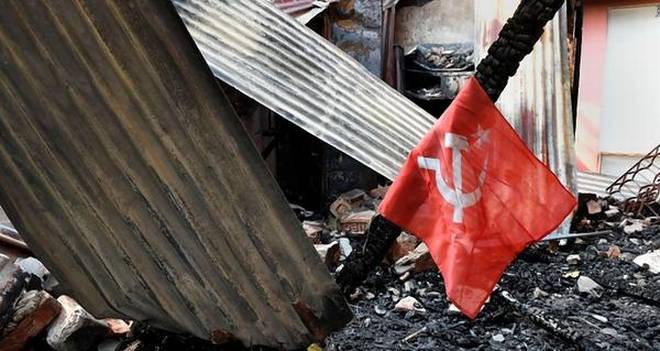 CP of India (CPI) and CP of India Marxist (CPI-M) release statements condemning the attacks towards Communists after the Assembly elections.

After the Assembly elections where, the Bharatiya Janata Party (BJP) won 35 of the 59 seats where the elections with its ally, Indigenous People’s Front of Tripura (IPFT), winning eight seats. With those results the BJP-IPFT alliance ended the 25 years of uninterrupted rule of the CPI(M)-led Left Front by winning 43 of the 59 seats.

Right after the Indian Prime Minister Narendra Modi's statements declaring the BJP’s victory in Tripura as an “ideological victory” and not just an electoral win, BJP supporters  demonstrated violence and attacks towards the communists and communist symbols. CPI-M reported large-scale attacks and threats across Tripura where several party cadres were injured and many party offices razed.

The attackers ruined the Lenin statue in Tripura just after the assembly election results on Monday afternoon. BJP supporters razed the statue in Tripura’s Belonia town with amid cries of “Bharat Mata ki jai" (Victory to mother India).

Following the anti-communist attacks in Tripura CP's of India released statements of condemnation.

The Central Secretariat of the CPI issued the following statement on March 6, 2018 stating:

"True to its character the BJP-RSS and their allied organisations have unleashed unprecedented violence against Communists and their supporters in Tripura. Party offices of Communist Parties are being destroyed and burnt. Hundreds of party offices have been captured by RSS-BJP goons. Houses of hundreds of Communist workers have been burnt in number of places.

This is nothing but vandalism and goondaism of RSS-BJP that need to be condemned by all democratic forces.

Bulldozing of Lenin’s statue and destruction of other monuments are highly condemnable. Lenin and his ideas live in the hearts and minds of people world over. It cannot be eliminated by bulldozing one statue.

If the government fails to stop the violence in Tripura, the Communists will take it as an ideological challenge and give a befitting reply."

The Polit Bureau of the CPI(M) released a protest note which said:

"The Polit Bureau of the CPI(M) strongly condemns the unleashing of unprecedented violence and arson by the RSS/BJP all across the state of Tripura in the aftermath of their victory in the recent assembly election.

CPI(M) and Left Party offices and cadres are targeted with murderous assaults. The destruction of the statue of Lenin, is symbolic of the rabid anti - communist, anti - democratic fascistic character of the RSS.

A delegation of the CPI(M) and Left Parties MPs submitted a memorandum to PM today in Parliament detailing major incidents of such attacks. This memorandum is attached here with.

These attacks clearly demonstrate, once again, that the RSS/BJP rely mainly on unleashing political violence as means to advance their inherent anti-democratic agenda.

In solidarity with the CPI(M), Left Front and the democratic peace loving people of Tripura and Comrades who are facing these attacks, the PB of

CPI(M) calls upon its units all across the country to organise protest actions exposing the inherent anti-democratic, anti people character and activities of RSS/BJP. "

CPI(M) also released a Memorandum addressing the Prime Minister and a report on the events.

See the link for more.