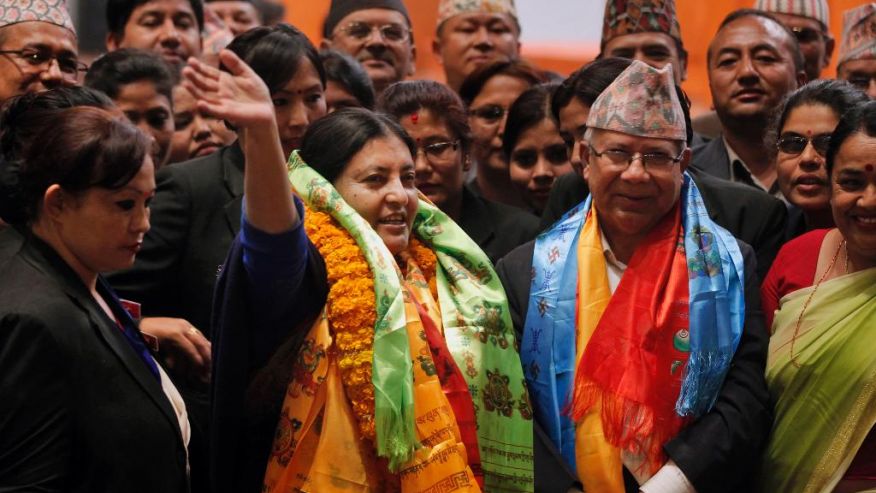 Vice Chairperson of CPN UML, Bidhya Devi Bhandari will be the second president after the abolution of the monarchy and the first woman as president in Nepal.

Nepal's parliament has named  Bidhya Devi Bhandari as the country's new president on October 28th. The CPN-UML leader received 327 votes against her opponent's 214.

The Vice Chairperson of CPN UML, Bhandari, will be the second president after the abolution of the monarchy and the first one after the adoption of the constitution in Nepal.

Earlier this month, Khadga Prasad Sharma Oli, the chairman of the CPN-UML had been elected as the next Prime Minister of Nepal defeating the current Prime Minister Sushil Koirala. See the link for the story on ICP.

Nepal adopted its new constitution after almost a decade of discussions on September 20th this year and became a federal republic, officially named as Federal Democratic Republic of Nepal.

Out of the 598 members of the Constituent Assembly, with three major parties, the Nepali Congress (NC), Communist Party of Nepal (Unified Marxist-Leninist) (CPN-UML), and the United Communist Party of Nepal (Maoist) (CPN-M),  507 voted for the new constitution, 25 voted against and 66 abstained in a vote. Following the voting, President Ram Baran Yadav promulgated the new constitution on September 20, 2015.