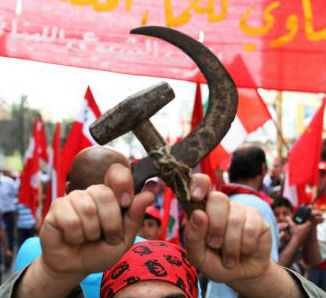 Arab Left Forum (ALF) gathered in Beirut on the call of the Lebenese Communist Party.

The 7th “Arab Left Forum” (A.L.F) called by the Lebanese Communist Party (LCP) gathered during January 9 -10, 2016 in Beirut. Twenty one parties and organizations, from eleven Arab countries, attended the meeting. Solidarity letters were received from five parties that could not attend the Forum.

The three points discussed in the “Arab Left Forum” were the recent political developments in the Arab world and on the international level, evaluation of the Arab uprisings and the struggle of the A.L.F in five years since its establishment.

Dr. Marie Nassif- Debs, coordinator of the Arab Left Forum and deputy general secretary of LCP, and Dr. Khaled Hadadah, general secretary of LCP made the opening speeches. The main theme in the speeches was the struggle taking place in the Arab world between the reactionary forces, supported by USA, and the change and liberation forces. The 3rd Palestinian Intifada, Syria after the Vienna Conference and the Saudi aggression in Yemen were also assessed.

In face of the counter revolutionary forces, the responsibility of the Arab Left in forming 'new liberation Arab movement, as an alternative that can filter the social and political forces which have shared interests in getting rid of the capitalist system' was pointed out.

The A.L.F maintained the launching of the National Progressive Front as a first stage on the road of National Progressive Democratic Liberation Resisting Movement.  Decision was taken to organize an Arab – International conference on “supporting the cause of Palestine” as a central case of the Arab peoples struggles.

The A.L.F also took several decisions on organizational activities such as concentrating on the women’s struggle and preparing an annual summer youth camp.