Two members of Communist Party of Venezuela (PCV) have been assassinated 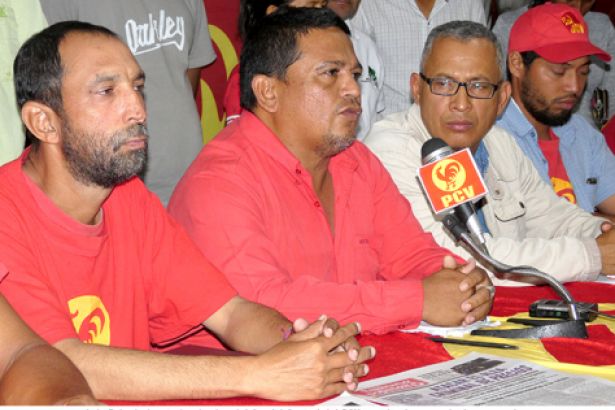 CP of Venezuela announced that Luis Fajardo member of the Central Committee of PCV, a leader of the peasant movement and another PCV member have been murdered by gunfire.

According to announcement made by Communist Party of Venezuela (PCV), Luis Fajardo member of the Central Committee of PCV and one of the leaders of the peasant movement and another PCV member Javier Aldana have been murdered by gunfire.

According to the statement made by Communist Party of Venezuela (PCV) two members of the party, one of them member of the Central Committee, have been shot from a moving car on their way home in the Nueva Bolivia district.

In the statement of the Political Bureau signed by PCV General Secretary Oscar Figuera, officials who have not taken required precautions for Fajardo’s protection although Fajardo received death threats repeatedly have been condemned. “We are holding land owners of Sur del Lago district, members of the National Guard and corrupt politicians who have publicly made numerous threats against our comrade responsible for the assassination” stated Figuera in his statement and requested the government to conduct a serious and through investigation and punish the criminals with severe penalties.

PCV leadership shared its condolences with the militant peasants’ resistance movement of Caño Rico and party members struggling throughout Venezuela and stated “We revere to the memory of our comrade. We will continue our struggle for the rights of the people and for an independent homeland and we will prevail.”

This incident has been recorded as the last and most violent of many of the assaults made against the Communist Party of Venezuela. A short time ago, another member of PCV was assaulted by gunfire from a motorcycle in the Barinas district, but narrowly saved. Sur del Lago is known as a district which witnesses frequent clashes between the peasants and land owners.

PCV which leads the ongoing struggle of peasants’ movement and agricultural laborers in the rural areas is exposed to various oppressions and assaults. Carolus Wimmer, member of the International Bureau of the Party which have many members detained for long periods or have been injured, addressed this issue in his latest interview with ICP and stated, “we are aware of the sacrifices this struggle requires, but we will not take a step back because of this.”

Recently, a statement was made regarding the unjust treatment against PCV member Jose Luis Daza who has been detained by Bolivarian Police Forces for 3 months with groundless allegations. Setting up an investigation committee against high ranking officials who took part in such incidents was proposed in the statement.

Members of United Socialist Party (PSUV), the governing party of Venezuela, also shared their condolences for Luis Fajardo. PCV criticizes PSUV for breaching the protocol signed by two parties in the beginning of October. PCV is expected to initiate a campaign against the assaults made against the resistance movement.