FARC and the Colombian Government have reached a peace deal 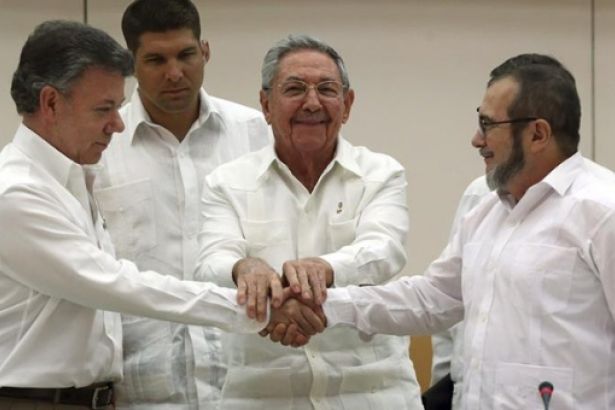 After 50 years of war, FARC and the Colombian government have reached a peace deal in Havana, Cuba. Parties will sing a final agreement in six months. Then, FARC will lay down its arms.

Revolutionary Armed Forces of Colombia (FARC) and the Colombian government have finally reached a peace deal after a long negotiation process. Both sides agreed on a deadline on the 23rd March 2016 to sign a final peace document, which will then be taken to a referendum.
The accord was reached in Havana. It’s been learned that Cuba and Norway will be the guarantors for the final deal.
According to the deal, FARC will lay down its arms within 60 days after the signing of a final accord. Afterwards, FARC will transform into a legal political movement. The Colombian civil war has been the longest-running war in the world.
Judicial process
According to The Guardian, the main document which is entitled as Special Jurisdiction for Peace aims briefly to, “satisfy the victims’ right to justice; obtain truth for Colombian society; contribute to the reparation of the victims; contribute to the fight against impunity; and grant security to those who directly or indirectly participated in the armed conflict.”
Instead of a constitutional revision the accord will create a temporary body in Colombia’s justice system. It will have a Chamber of Justice and the Tribunal for Peace. Each section will have a number of foreign magistrates. In the accord, the essential function of the sections described as, “to do away with impunity, obtain truth, contribute to victims’ reparations, and to judge and impose sanctions on those responsible for serious crimes committed during the armed conflict, particularly the most serious and representative ones.”
Within the judicial process there will be a distinction between those who “recognize their responsibility in an early fashion for the most serious crimes” and those who “recognize their responsibility in a late fashion.”  The first category will be punished with “effective restrain of liberty” instead of jail for between five and eight years. On the other hand, the second category will be punished by prison for five and eight years. Those who “fail to recognize their responsibility and are declared guilty… will be convicted to prison sentences for up to 20 years.”
50 years of war
Since 2012,  the negotiations between FARC and the government agreed on a land reform, political participation of rebel forces after signing of a peace deal, elimination of all illicit drug production and amnesty for combatants.
The war between FARC and the Colombian State began in 1964. According to Colombia’s National Centre for Historical Memory, more than 220,000 people have been killed during the war. Millions of people have been displaced. The right-wing paramilitaries affiliated with the government and CIA carried out massacres, torture and lots of crime against humanity.