PSL: 'The people can rise to the challenge' 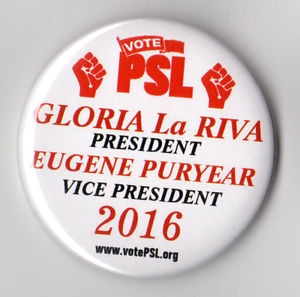 Party for Socialism and Liberation (PSL) issued a statement on the upcoming U.S. Presidential elections.

Commenting on the candidates of the establishment parties, the PSL statement said:

"Trump embodies a whole class of sleazy landlords and developers, who buy favors and regulatory changes from politicians to make super-profits at the expense of poor and working-class tenants. So the choice is between Trump, a billionaire who buys out politicians, and Clinton, a politician in the employ of billionaires.

That’s the current state of American “democracy” in a nutshell: a pure sham, a rigged process dripping with corporate money to ensure the selection of an ultra-rich racist imperialist. Trump and Clinton each have higher unfavorable ratings than any presidential candidate in U.S. history. A recent tweet captured the sentiment of millions: “there must be a cheaper way to find the worst people in society.”"

The statement highlighted the role played by both the Democratic and Republican Party in creating the country’s vast inequality with anti-worker trade deals, de-unionization, the deregulation of Wall Street and the elimination of social services.

Noting the lack of coverage on the third party candidates in the corporate media and how the country is being ordered to pick between Donald Trump and Hillary Clinton, the statement stated why the Party for Socialism and Liberation is participating in the elections:

"Millions, we hope, will disobey these orders and reject the false choice between the widespread misery of the status quo and far-right chauvinism. In either case, regardless if Trump or Clinton win, there is no question that the future will be one of even more intense struggle. It will be struggle for the working class in general, for all oppressed communities, as well as for the movements for peace and environmental justice.

The growing social movements of the past few years, as well as the growing progressive and pro-socialist sentiments, show that the people can rise to the challenge. But to do so requires having organizations that are constantly preparing and training for a united fight-back. That is the reason that the PSL exists, both in the elections and afterwards."