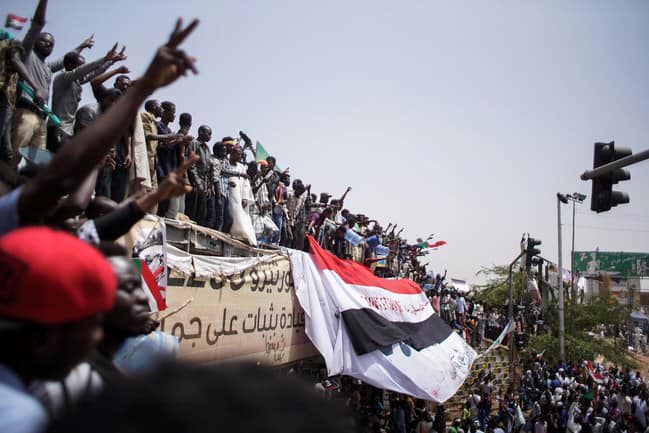 The Political Bureau of the Sudanese CP issued a statement on June 1 regarding the political situation in Sudan following the overthrow of the Omar Al Bashir. The ongoing demonstrations of the Forces for the Declaration of Freedom and Change (FDFC) are occasionally being attacked. On the other hand, the Transition Military Council (TMC) that took over the power is delaying the transition of power to the FDFC. Under these circumstances, the statement of the Sudanese CP clarifies the position of the Party regarding the transition process.

The Sudanese CP reminded in the statement its initial refusal to negotiate with the TMS which it saw as a remnant of the security committee of the dictator Omar Al Bashir. Instead, it had called for the immediate handover of all powers to the FDFC representing the millions of Sudanese who had defeated the dicatator through five months of non-violent protests.

However, the Party submitted to the wishes of the FDFC who accepted to sit down with the TMC to negotiate on a power sharing. The Sudanese CP underlined that this was costly in terms of meeting the aspirations of the millions for a genuine change and enduring the apparent discontent of Party members and sympathizers.

This pragmatic position of the FDFC was accepted by the Sudanese CP for the sake of ensuring the unity of the opposition under the leadership of FDFC. The FDFC at first managed to reach a deal with the TMC regarding the duration and composition of the interim government; but the negotiations collapsed over the composition of the supreme council and its presidency.

The Sudanese CP expressed its concerns about TMC's neglecting the need to protect the demonstrators against attacks from Al Bashir sympathizers. It also warned about the divide between the security forces, the Rapid Support Forces (RSF) and the National Armed Forces (NAF), accusing the TMC of deliberately concealing this divide. The statement pointed out that the RSF is headed by a war-lord from Darfur and supported by foreign governments at the expense of the NAF.

The statement claimed that Al Bashir's regime has not been actually dissolved. Indeed, Sudan's embassies and diplomatic personal loyal to the regime are operating freely around the globe and the members of the TMC are entering into deals with other countries illegitimately in the name of the people of Sudan. The Sudanese CP declared it's awareness of the interference of some foreign governments and companies in the internal affairs of Sudan contrary to the interests of the people of Sudan.

It was emphasized in the statement that the TMC has been openly threatening the protesters going on strike. The Sudanese CP called for a general strike against the failure of TMC to hand over power to FDFC on 28th and 29th May 2019. It was reported in the social media channels of the Sudanese CP that the worker's strike had been successful with a near full support in the health, justice, communication, aviation, transport, railway, oil, electricity, banking sectors and in the state ministries.

The statement finally said the following:

'We also fully support future strikes, demonstration, civil disobedience and all other forms of non-violent protests to achieve the goals of our people. We call on all our members, friends and sympathizers in Sudan to participate in future strikes, demonstrations, etc. in order to force the military junta to listen to the wishes of the people for a free and civilian run Sudan. We also call on our friends and the international community abroad to show solidarity and support for our cause and to highlight and showcase our aspirations for Freedom, Peace and Justice.

We urge the international community to act swiftly to exert maximum diplomatic pressure to try and stop the armament of the militias of the RSF and to push for supporting and recognizing the National Armed Forces with its honorable junior rank officers and soldiers who aspire together with the rest of the people of Sudan for freedom, justice and peace under a new civilian and democratic era.'