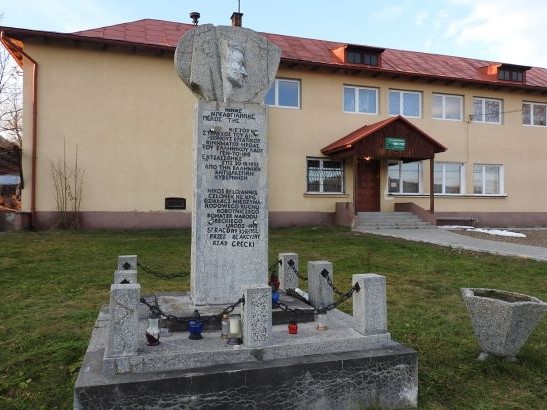 The monument of Nikos Beloyannis in Wroclaw dismantled, KKE and KPP denounced the barbaric act.
ICP, 18 April 2019
Last week, the monument of Nikos Beloyannis in Wroclaw was dismantled. The procedure that was carried out without the knowledge of the Greek community living in Poland remains unclear. Beloyannis, the great communist who fought against fascism during WWII, fought in the Democratic Army of Greece during the civil war and carried out underground activities to reorganize the Communist Party of Greece after the war, was commemorated in Poland with monuments in Wroclaw and Kroscienko, erected by political refugees from Greece.
The Communist Party of Poland (KPP) expresses its indignation at the dismantling decision and considers it as a part of the so-called decommunisation act. The Party demands the restitution of the monument of Nikos Beloyannis as fast as it is possible and declares that they cannot allow the Institute of National Remembrance and other institutions to rewrite and manipulate historical memory of the society.
The Communist Party of Greece (KKE) strongly denounces the barbaric act and considers it as an insult against the struggles and memory of the Greek people.
Since the legislation of the anti-communist law of 2016, Polish authorities have been trying to annihilate any memory that reminds the socialist period of the country or the communist movement in general.
Tweet