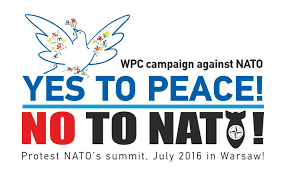 The Communist Party, Turkey (KP) released an interview on its weekly newspaper Boyun Eğme, with Iraklis Tsavdaridis, Executive Secretary of the World Peace Council (WPC) on the upcoming NATO summit.

You can find the interview below:

Boyun Eğme: The NATO summit will take on 8-9 July in Warsaw and is a matter of concern for the WPC,more than ever.What are your thoughts in this regard and do you think this summit is adding new threats to peace and to the peoples of the world?

Iraklis Tsavdaridis: The WPC is historically the only international peace structure which is opposing NATO strongly and by principle. NATO  was and still is the armed tool of imperialism. It was never founded for the defense and it has always been offensive, supporting fundamentalist regimes, plotting coups and serving the interests of the monopolies and the multinational corporations. NATO was created much before the “Warsaw Pact” and when the latter was dissolved, NATO expanded further eastwards as well known. At the same time NATO has a stregic partnership and cooperation with the European Union, especially after the Lisbon Treaty of the EU and the Lisbon summit of 2010 of NATO. The officials of NATO are actually not hiding their goals and plans. In the summit in Warsaw in July many prior actions will be ratified and the deployment of 30.000 troops along the line from the Baltic Sea till Bulgaria will be formalized. Their goal is to face the Russian Federation and by installing a missile defence shield in Estern Europe, NATO wants to avoid a possible military respond from Russian side while it secures a first strike option. The EU from its side is establishing an Euro-army and with its “battle groups” it is ready to coordinate military missions with NATO, along with actions inside their own member states against possible future massive protests or uprisings of the peoples.

BE: The WPC has been fully vindicated in its estimation after 1999 that the imperialist intervention and bombing of Yugoslavia by NATO, with the creation of the Kosovo protectorate then, was amongst other things a general trial as well as the beginning of a plan that they later followed in Afghanistan, Iraq, North Africa and particularly in Libya, which unfolded during the so-called Arab Spring,utilizing the accumulated rage towards the reactionary regimes that cooperated with the USA and EU.

IT: In 2014 the United States and the European Union generated the violent overthrow of Ukraine’s government – partly by organizing, arming and equipping neo-Nazi storm troopers – and replaced it with an EU/US client regime, used to politically and economically dominate Ukraine and its strategy against the Russian Federation. NATO is planning to affiliate Sweden, Finland, Serbia and Former Yugoslav Macedonia, as well as Cyprus into the “partnership for peace”. All of the above and the recent decisions of NATO, upon invitation of Germany,Greece and Turkey to patroll in the Aegean Sea is just agravating and escalating the tensions and bringing us closer to a generalized war of world dimensions.

BE: What are the plans of the WPC for protesting upcoming NATO summit?

IT: The WPC had organized earlier protests and conferences in Istanbul, Strasbourg, Lisbon,  Chicago and  Wales, we will do so also in Warsaw this July. We will hold an anti-NATO conference with the attendance of friends from NATO member states and from abroad with the support of the fraternal International Anti-imperialist Democratic Organisations on 8th July . We want to highlight with our campaign and under the slogan “Yes to peace-No to NATO” that NATO is the enemy of peace and of the peoples. We know and strongly believe that the main actions of the WPC and its member organisations will be carried out the same dates in the respective countries. Already such plans are unfolding, with political events and discussions, with protests in front of embassies and NATO offices and with massive events in several countries. Our presence in Warsaw consitutes not only a protest and the vehement condemnation of the criminal and imperialist plans of NATO but also our solidarity with the peace loving forces in Poland, who struggle in extremely difficult conditions.

BE: How do you think those aggressive plans of NATO against the peoples and the working class be obstructed?

IT: The Global Peace Movement and the WPC in particular arhave been struggling all the year against the plans of the USA, NATO and the EU,  in the Middle East, where for the last years the imperialist plan for a “Greater Middle East” is unfolding; against plans in the Eastern Europe where the imperialists are deploying huge number of troops; and plans in the Asia&Pacific where the USA are shifting 60% of their military power. Likewise we fight against the increasing aggressiveness of imperialism also in Latin America, where the USA have relaunched their 4th Naval fleet, or in Africa where the military interventions are intensifying with the pretext of combating terrorism. The important point in this struggle of the peace movement is to underline and understand that the same forces which prepare and carry out wars and aggressions are behind the attacks on peoples’ and labor rights in many countries. The monopolies and big capital are growing their profits even during the economic crisis of the system, seeking for new energy resources, markets and spheres of influence in time of imperialist peace or imperialist wars. Only the united, coordinated and determined struggle of the peoples can put a halt, weaken and finally overthrow the imperialist domination.