'The way-out cannot be a capitalist Greece' 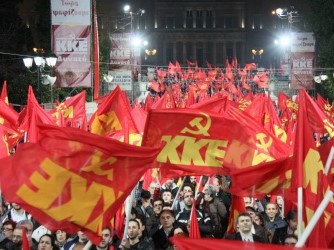 ICP interviewed Lefteris Nikolaou, candidate MEP of the KKE.
ICP, 22 May 2019
C. Lefteris Nikolaou, candidate MEP of the KKE and member of the International Relations Section of the CC responded to the questions of the ICP.
In Greece, this year May 26 is marked by a "triple election:" the European elections and the elections for regional and local authorities. It is known that the elections for the EP remain generally far from mobilizing people, and consequently, levels of participation remain considerably low. The KKE, even as a party represented in the EP, has always strictly opposed illusions about the character of the EU, which is an imperialist centre that serves the interests of European monopolies. What is the importance of the European elections for the KKE?