Thurmer: 'Europe can survive only if socialism wins' 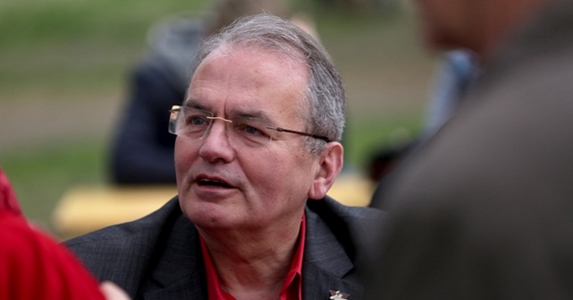 Special Interview with the leader of the Hungarian Workers’ Party, Gyula Thurmer.

ICP: Your party evaluates the newly completed presidential election as "nothing more than a fight between two groups of Hungarian capitalists." Could you please give more details about the re-election of Janos Ader?

Gyula Thurmer:The Hungarian capitalist class consists of different groups. There are two main groups, the conservative group and social-democrat-liberal. The first is represented by the actual ruling party, Fidesz. In the second one there are a lot of parties, basically the Hungarian Socialist Party and the liberal Democratic Coalition.
They have a similar position on the basic issues of the capitalist order. Both groups are anti-communists, and deny the socialist decades of the Hungarian history (1948-1989). Both of them are committed to maintaining capitalism in Hungary, to strengthen Hungary’s participation in the EU and the NATO.
There are also differences between the two groups. The conservatives are more nationalist, and orientated on the German capital. The socialists and liberals are globalists with close connections to the US and Israel.
Janos Ader was the representative of the conservatives and Laszlo Majtenyi was the candidate of socialist-liberal parties
The socialist-liberal coalition ruled Hungary in 2002-2010 but they were unable to stabilize Hungary after the beginning of 2008 year’s crisis. They lost the power. Getting into opposition those parties have been split in separate organizations.  They have tried to come to power again and besides the elections, they used mass demonstration, NGOs but without success.
The split socialist-liberal opposition has neither a common platform nor a common charismatic leader. The nomination of a liberal scientist for the post of the president of Hungary was nothing else than an attempt of the opposition to come to a common position at least on this issue.

ICP: Victor Orban's ideal of "fighting with terrorism" seems to be bound on detaining refugees in containers and training "border hunters". How does Munkaspart fight with the rising racism and the arming of nationalists?

GT: We must not believe everything what the bourgeois press says. Nobody can seriously think that any government can fight against terrorism just by containers and border police. But let’s see the main points. We consider the following. One, terrorism is not identical with migration. But at the same  time it is a fact that terrorists use the channels of migration. Two, the migration crisis is the result of the policy of the capitalist countries. They launched wars in the Middle East. The imperialist wars and interference should be stopped. The countries of the region should be supported in developing. This is the solution of migration and not the “refugees welcome” policy of the EU.
Three, something which may be called racism exists in Hungary but it has nothing to do with migration. It concerns the Roma population. Hungary has a population of 10 million. About 700-800 thousand are Romas, in other words Gypsies. Socialism could not solve all the problems connected with Roma population, but it created a better life for them. During socialism everybody had to work and the socialist state created a lot of jobs for Gypsies. Since 1990 the Hungarian capitalism destroyed this system. It is not obligatory to work and the capitalist companies are not interested in using Roma labour force without education and experience. The majority of the Roma population does not work. It is the source of many social and human conflicts.
The Hungarian Workers' Party thinks that one needs time, patience and money to solve the Roma problems. The state should give education for them and create jobs. I am convinced that capitalism cannot solve it.
Nationalism is not a new phenomenon in Hungary either. It is not connected with the migration problem.  Hungarian nationalism is connected with the historical fact that after the First World War Hungary has lost 72% of its former territory and 64% of its former population. Even now about 2,5 million Hungarians live in Romania, Slovakia and other neighbouring countries. Capitalism did not solve their problems and many of them continue fighting for cultural, linguistic autonomy.
We condemn nationalism, chauvinism and criticise the nationalist actions of the governments. We explain to the people that capitalism, national hatred cannot be our future. Europe can survive only if socialism wins.

GT: The Eastern European capitalist leaders understand better than the leaders of the big EU states and the US that an actual crisis of capitalism can change everything and the day can come when the popular masses destroy capitalism. Why do they understand it better? Because the people of their countries lived in socialism until 27 years ago. The Americans and the other Europeans have never lived in socialism.
The Hungarian leadership tried to explain to US and EU leaders for many years that the neoliberal policy followed  by the IMF and EU would lead to a socialist revolution. They did not believe it.
The essence of PM Orban’s policy is nothing else than  an attempt to save capitalism by limiting the capital. It means to take away a part of the extra profit from the banks, supermarkets, monopolies and to give a bit more to the people.
The liberal circles did not want to accept this policy neither in Hungary nor abroad. The Orban government did not abandon its course and was even able to stabilise capitalism in Hungary. By some limitation of the capital!
The US political line towards Hungary was dominated by liberals. This fact explains the strong criticisms and even attacks against the Hungarian government.
Mr. Orban’s government welcomed the triumph of Donald Trump because they hope that he will change the neoliberal policy globally and it would change the political relations between Hungary and the US.
In military and economic fields there are no problems. In the military field Hungary fulfills all wishes of the US and the NATO. For example, the Air Base in Papa was selected as the Main Operating Base (MOB) to host the SAC C-17 aircraft. It is Hungary’s intention to continue the development of the base into a significant, joint-use, multi-modal hub and spoke airport, that would satisfy national, SAC, NATO and EU demands.
The United States is the largest non-European investor in Hungary. American companies in Hungary employ 91 thousand people and their investments is in total approximately 9 billion USD.

ICP: What do you think will be the consequences of Russia's Nuclear Power Project in Hungary for the working people in your country? Does your Party plan to take steps in that matter?

GT: The nuclear power station Paks has been existing since 1982 and produces 40% of electricity.
The Hungarian government decided to use nuclear energy also in the future to supply Hungary with electricity. The importance of nuclear market is rising in Europe and there is a real competition in Hungary too. The American Westinghouse Electric Corporation wanted to get the right to build up a new nuclear station in Hungary. French companies also paid great interest to Hungary. The Hungarian government decided to continue the cooperation with Russia and to build up Paks II with Russian companies.
The Hungarian Workers’ Party considers the following. One, Hungary is a country without large energy resources. Dependence on external energy resources is a fact of Hungarian reality. Two, we think that it is impossible to give up nuclear energy as it is demanded by liberals and to use only alternative resources. Three, Hungary has long experience with Russian technology and it would have been a mistake to change it for some unknown technology. Four, Hungary should develop new sources of energy supply, including wind energy, solar, etc. but they will not replace nuclear energy. Five, the existing system of energy supply means less burden for the Hungarian people. If we were in power, we would take the same political and economic decisions in this regard.

ICP: The possibility of the dissolution of the EU seems to get stronger. Apart from Brexit, economic and political contradictions among the countries that are members of the Union are intensifying. What are the opportunities you see for the upcoming period?

GT: The European Union is in crisis. It reflects the general crisis of European capitalism. The European capitalism cannot give work to its citizens. It cannot solve the migration problem.
The attempts of the German and French capital to solve the crisis by more centralisation of the EU, by creating a United States of Europe deeply hurts the interests of the Eastern European capital which has become stronger in the recent years.
The attempts of the EU to conquer new markets in Ukraine, Belarus, Georgia, Moldova and other states hurt the interest of the Russian capital. If the EU continues this way, it will come to a direct military conflict with Russia.
The working masses in many EU countries do not want to tolerate austerity anymore. The former strong position of the middle classes is undermined by the crisis. Capitalism is in the condition of full uncertainty.
The working masses have got fresh experience of class struggle. I mean the processes  in Turkey since the events on Taksim Square in 2013 or the experience of the SYRIZA government in Greece and the battle of Greek communists against it. But I can add that the Hungarian masses are also awaking.
The walls of the European House are unstable. If something unexpected happens, a war in Ukraine or in the Balkan, total collapse of the EU migration policy or similar things, it can give new directions to the anti-capitalist class struggle. We, the communist forces should be prepared for this moment.