Simonenko: 'Uniting all the forces against the real and ever-growing threat of neo-fascism' 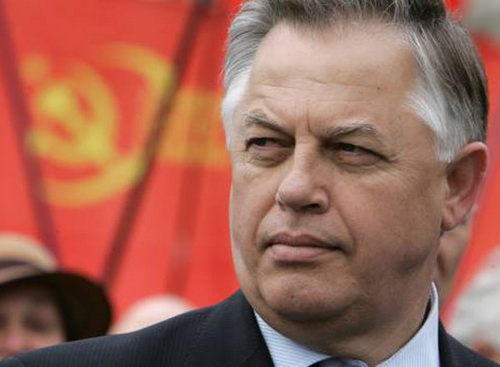 Interview with General Secretary of Communist Party of Ukraine, Petro Simonenko on the recent agenda of the communists in Ukraine.

General Secretary of Communist Party of Ukraine (CPU) Petro Simonenko made statements on the recent situation of his party, on the anti-fascist struggle and international solidarity in an interview by Raffaele Morgantini on Investig’action.

In the interview, Simonenko noted that the Kiev government having explicitly fascistic tendency treats the communists of the country like once the Nazi occupiers had treated the communists. "They accuse the communists of collaborating with the separatists and supporting the terrorists, since none of the accusations could be proved, the government changed the tactic", he informed and continued saying: "They passed a law named “decommunization”, which aimed at forbidding the activities of the communist party and its symbols. The government refuses to agree with the resolution of the Venetian commission stating that the decommunization law is undemocratic, and also refuses to follow the UN resolutions on the Nazi and fascistic propaganda."  Simonenko stated that the communists carry on their struggle against this dirty campaign of the Ukranian government and anti-communist legislations and court decisions.

General Secretary also mentioned the accusations directly against himself. He informed that the government had tried to intimidate him and avoid his political activities. The accusations against him were as following:  “Treason”, “financing terrorists”, “financing the separatists”, and “preparation of the group organized to combat in Donbass”.  He was exposed to unlawful interrogations for these groundless accusations.

Simonenko remarked that the laws passed by the government embraced the glorification of those who fought on the side of Nazi troops. Awards assigned to the German commanders are treated as national awards and military ranks assigned by the Nazis recognized the military ranks of the national liberation movement. He pointed that those laws which are contrary to UN resolutions related to the promotion of Nazism and fascism and the Kiev government refused to recognize the European and international standards. They also refuse to recognize the decisions of the Nuremberg Tribunal, concerning crimes against humanity committed by the Nazis.

Simonenko stated that, against the fascistic tendencies of current government, CPU had received substantial support from the left-wing people from Europe. He added that, those who participated in solidarity acts in Europe for the CPU and Ukrainian people worked hard for influencing their parliaments and governments. General Secretary reminded that the European public was also beginning to change their views on the events in Ukraine. He expressed his gratitute to the comrades of the leftist movements that had sent lawyers to Ukrainian courts to protect the CPU. Simonenko informed, that the Ukrainian judges listened carefully to what the people who came from Europe had said, especially to the members of the Federation of Democratic Lawyers.

Simonenko also outlined the policy of the communists as not only working with those who defend the fundamental ideas of the party, but also expanding their contacts with the aim of uniting all forces in the face of real and ever-growing threat of neo-fascism, which is already beginning to turn into some specific measures taken by the Kiev administration against the Ukrainian people.

The GS reported that the joint efforts had been beginning to yield fruit. For example, for the last six months the Court of Appeal had been unable to carry out the whim of the authorities to ban the activities of the Communist Party of Ukraine. Simonenko concluded saying that they would continue their struggle with the belief that the European Court of Human Rights would objectively review the situation in Ukraine and would support the struggle of the communists for democratic rights, including the right for political activity.