PSL Presidential Candidate La Riva: 'The consciousness is growing along with the struggle' 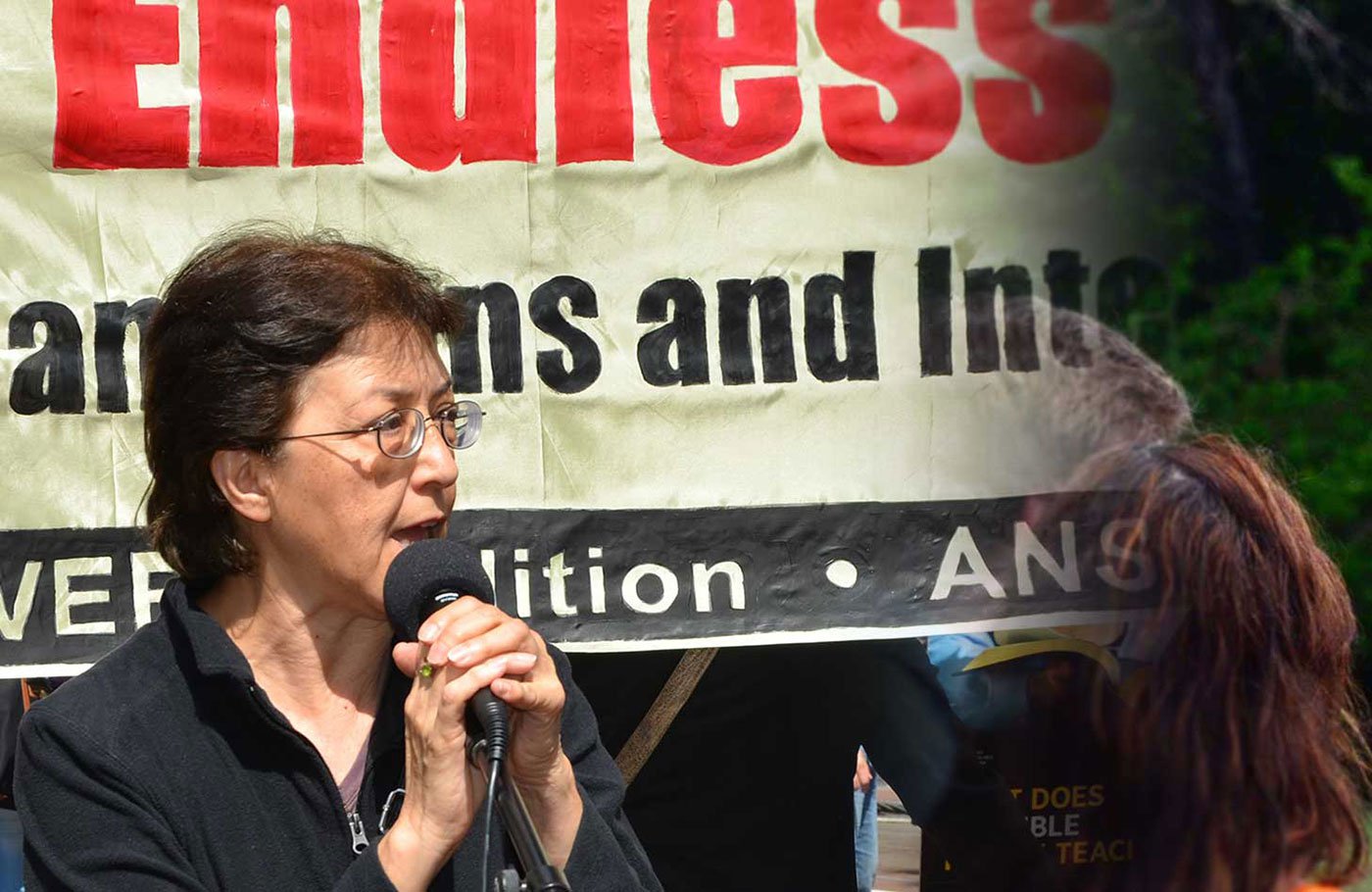 ICP: Can you assess the recent protests in response to the murder of African American people by the police? How widespread are they, are they mass protests and what are their class character?

Gloria La Riva: For several years across the United States there have been growing numbers of mass protests against the police murders of Black and Latino youth. They are principally of a working class character, especially Black and Latino youth, but also many white working class people are joining in considerable numbers. The public awareness and anger, both national and international, is largely because of the video recordings and social media, but more importantly, because of the mass demonstrations and rebellions.

The wave of protests and broader public awareness began with the cold-blooded murder of Oscar Grant, a young African American man in Oakland, California on January 1, 2009, by policeman Johannes Mehserle of the metro transit system known as BART. The video went viral, reaching hundreds of thousands. The massive rebellions and protests of thousands of people forced Mehserle's prosecution and conviction. He was given an outrageously short 10-month sentence, but it was one of the very rare times that a police has been prosecuted in the whole United States.

Ferguson marked a turning point and forced America to see that the epidemic of police killings of African American youth can no longer be ignored by those in society who historically have not been affected.

This short 8:55 video that I produced from the first weekend, Aug. 16, 2014 after Michael Brown's murder, shows a remarkably diverse group of people in the daytime protest, very working class. Even after the Governor Jay Nixon declared martial law that afternoon, the defiance of the community continued. Those weeks of resistance had a lasting effect and became known worldwide.

What came to light in the weeks of federal investigation in Ferguson, was an intolerable situation that added to the social explosion of 2014: vast numbers of the Black population in the 90 cities of St. Louis city and county were under warrant or had spent jail time or were threatened with jail time for not paying fines to the city for simple things like parking tickets, that grew and grew. The singling out and prosecution of Black people for petty violations and massive fines provided up to 40% of those city budgets, some $60 million in 2013 alone.

The practice of racially profiling Black people to harass and prosecute, in order to finance a municipal budget is actually very common in many cities in the North and South of the United States. African American men are so vulnerable when stopped by police, any encounter can lead to their deaths. Philando Castile was stopped at least 52 times by police since 2002 for outrageously minor excuses, and it finally led to his death.

The emergency demonstrations of youth protesters after some of the most visible murders by police are becoming more widespread, nationally coordinated by virtue of social media.

For example in two of the most gruesome killings, the first week of July this year, of Philando Castile in Minnesota and Alton Sterling in Baton Rouge, there was a massive nationwide response. In the next two days and weekend, 15,000 marched in Atlanta, 2,000 in San Francisco (photo attached), thousands in Hartford CT, Boston, Phoenix, Rochester, Baton Rouge, places that have not been the scene of protests until now, in addition to more well-known cities of New York, Los Angeles, Chicago.

And this was even after the killings of four police in Dallas, TX. In an earlier time there would have been condemnation by officials and the media, to demand that the people not hold protests  after police were killed. But that did not happen this time. It almost seems to be an unspoken understanding that the killings continue unabated and there was bound to be some sort of reaction, even if by individuals who acted alone out of rage.

And yet, the police killings continue unabated. In Chicago, of 702 police shootings since 2000, with 215 fatalities, there have been zero charges of federal civil rights violations. This despite more than $600 million being paid out to families for many of those murders, an implicit admission the police were culpable. We must also not ignore that of the roughly 1,200 police killings, almost half were of white people, working class and poor, not those of economic means. Disproportionately of course, people of color, including Native people, have been abused and killed.

I compare what is happening in the United States as similar to the phenomenon of earthquakes. Under the ground are the tectonic plates, building up enormous pressure, between the police state and the masses, the repression increasing inexorably, and the frustrations, anger, social pressure of protest growing too. At some point, maybe soon, there will be a sudden break, a great rupture, a social explosion. It cannot continue this way.

Interestingly, a recent survey shows that even white people in the general population are starting to see that the injustice must change. Here is a direct excerpt from The Washington Post of August 4:

"A Washington Post poll asking this question last year found 53 percent of whites saying more changes are necessary to ensure equal rights for black people, jumping from 39 percent before Michael Brown's death in 2014. Concern about equality rose among both white men and women, those with and without college degrees, and among white conservatives and liberals.

"The shift was not fleeting. An identical 53 percent of whites in a Pew Research survey this spring said more changes are needed to ensure equality. Dealings with police stood out as the area of greatest concern, with half of whites saying that blacks are treated less fairly in such encounters."

ICP: In addition to being against racism, these protests seem to be reflecting the hidden rage of the working class building up over the years? What do you think?

GLR: One cannot separate the Black Lives Matter struggle from other phenomenon in the last five years, movements of both a social and economic nature, which started with Occupy. The Fight for $15 arose next, for a livable minimum wage, workers who are so exploited and low paid, who saw absolutely no change coming from politicians, they took it upon themselves to organize, struggle. Through persistence and independent action, with support of the Organized Labor movement, the workers themselves forced the raising of the minimum wage in key cities.

All of this, including the immigrant-rights movement, the students demanding relief from the $1.2 trillion student debt, this signals a deepening consciousness among millions of workers and poor, who are becoming fed up with the obscene accumulation of super wealth by the capitalists, and who are aware that the capitalists' wealth results in their poverty.

ICP: The mobilization that started among the lower paid workers continues. How seriously should we take this? What sort of opportunities does this mobilization provide for working class politics?

GLR: The great potential that we see in all these struggles – that we have also been actively involved in, and organized many — throughout the United States, is that there is no separation between these movements. The union movement is more and more engaged in immigrant rights, against police brutality. The youth may march today against a police killing and tomorrow for Fight for $15 or against deportations. What we do know is that the impoverishment of the working class is deepening. The same speculative practices of the capitalists and bankers, which led to the 2008 financial crisis, have continued. At some point, the economy will suffer another shock. This time it won't be so easy for the government to justify a new billion-dollar bailout for the banks. The consciousness is growing along with the struggle.

ICP: What is the position of the ruling establishment regarding the candidacy? Do they favor Clinton over Trump?

GLR: Large numbers of establishment Republicans are very concerned about Donald Trump because they have not been able to control his actions which threaten to further isolate their party. But he is also being denounced by Clinton and her camp because of his recent statements that the U.S. shouldn't have gone to war in Iraq, or that he doesn't consider Russia a threat, although some times he does backtrack. After Mitt Romney lost in 2012 because of his blatant pro-rich, reactionary views, it seemed as if the Republicans would try to cosmetically change their image, since they had become so isolated and lost so heavily. But instead, it moved further to the right. The 17 candidates earlier in this election tried to outdo each other as the most conservative, anti-woman, racist, anti-worker that they could be. Meanwhile, Trump's racist rants against Mexicans and Muslims got him endless amounts of national network coverage. That media coverage was a major factor in his rise.

And yet, Hillary Clinton is extremely dangerous because of her extreme neo-conservative views, and proven history as a warmonger. Right now, Clinton and the Democrats know that Trump's recent comments have alienated growing numbers of the population and politicians who are afraid of being identified with him. She can claim to be for all people, to be a woman who cares for women and children, but her claim to represent women's and children's interests, given her history advocating war that killed so many hundreds of thousands of people, including women and children, rings hollow. This is why both Trump and Clinton are so thoroughly disliked by large percentage of the population, and why Bernie Sanders received overwhelming support. Clinton's declaration that Madeleine Albright and Henry Kissinger were her friends whom she admired, was not an accident.

ICP: If Trump were to become president, what should the working class in the U.S. and around the world expect? How about Clinton?

GLR:  It is still too early to gauge the outcome at this date. It seems as if Clinton is gaining more support, but it is not safe to make predictions yet. :-).  If she were to win, she has already pledged to aggressively try to eliminate the Assad government through bombing, but the Syrian government and Russia may have other ideas. She promises to attack the Boycott, Divestment and Sanctions movement against Israel, but it is Israel that is becoming more isolated, although still extremely dangerous to the Palestinian people. Trump's economic outline that he unveiled on August 8 promises more tax breaks for the rich, more deregulations and capitalist incentives, but that is little different from Clinton, whose pro-rich policies will manifest in other ways. In summary, we in the progressive movement must escalate the struggle, educate and mobilize, and be part of every progressive struggle that develops, to help build a truly massive movement, along with millions of young people already awakened in this election year, who will not take either new president lightly.

We are very glad that we in the Party for Socialism and Liberation made the decision to intervene in the 2016 presidential election, to run socialist candidates and mobilize our whole membership nationally. We have witnessed an unprecedented, positive response towards socialism this year among vast numbers of people, especially youth, thanks in large part to the Sanders campaign and his identifying as a socialist. It is also the times of the last five years. There is an undeniable awareness among millions of people that not only is capitalism not able to solve the economic and social crises, it is in fact the cause. Our members have been very enthused in campaigning for socialism. It is a unique opportunity that this election year has afforded us.
See the link for the biography of Gloria La Riva
Tweet