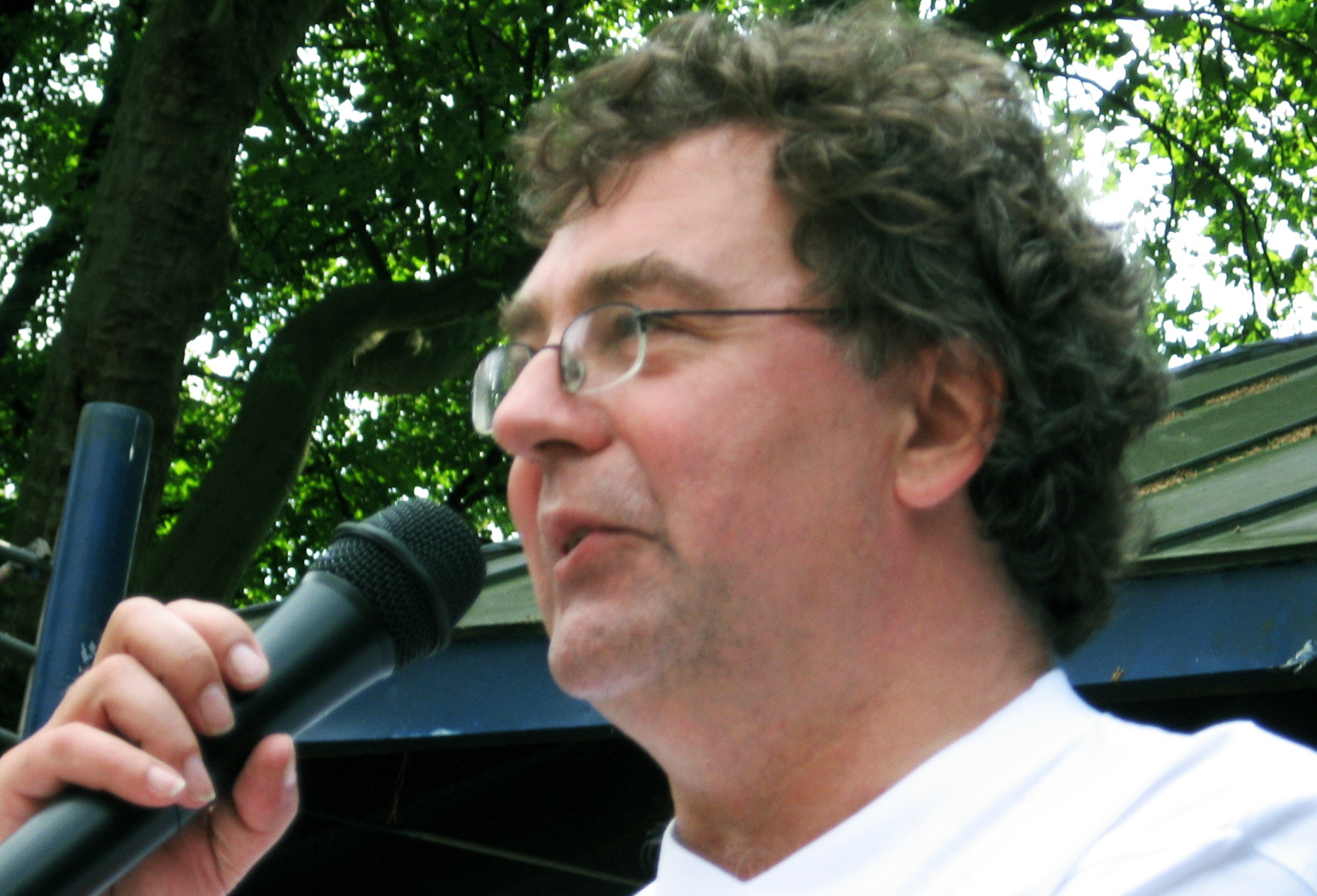 ICP: Germany increases armament. Federal army is strengthened. Against all protests, Germany continues to export arms to countries like Saudi Arabia. What do you think about the Africa and Middle East politics of the Federal Republic of Germany, i.e. German imperialism?

Patrik Köbele: We should first start with the armament policy in general. Secretary of War* von der Leyen demands 130 billion for the coming 14 years on top of the existing armament budget. What is interesting about this demand is that the planned increase in the number of tanks plays a certain role. This points to an armament policy in line with a more aggressive external attitude of the Federal army.
As a matter of fact, we asses that we are in a period where the German imperialism will be more aggressive both internally and externally; this is of course related with the Africa and Middle East politics of the German imperialism.
We depart from the idea that German imperialism decided to participate in the war in Syria with the fear to be trailed by events upon the intervention of Russia, which was in accordance with international law and fully right. But at the same time it should also be considered that there are also military activity plans in Libya. Germany also has ongoing military activities in Mali in Central Africa for a long time.
This clearly means the following: German imperialism, although not in competition with US imperialism, but competing with French imperialism, tries to enforce its own interests and realizes its ambition relatively strongly in Africa and the Middle East.

ICP: What about UK?

P. K.: First of all, the British try to gain power within the European Union playing the American card. But in fact they are in a relatively weak position compared to French and German imperialism. However, as demonstrated by the Libyan attack undertaken together with French imperialism, they are not less dangerous. I believe that there is a competitive relationship between these three and I think German and French imperialism are a little bit more prominent in that.

P. K.: Basically, the function of the EU is to represent the interests of the principal imperialist powers. On the other hand, the EU inevitably tries to balance the competition and uneven development which continuously puts it in a tough situation. At the end of the day, they need to sustain the EU in order to continue to suck the blood of the EU's peripheral countries. However, they face problems since they cannot control their own inequalities and disparities in development. And therefore, their competition becomes a threat with the potential to explode the Union.

ICP: An "imperialist war" is frequently mentioned these days. As an ally of the US, would German capital dare to go to war with Russia?

P. K.: I don’t think that it is likely at the present. The process will rather continue through representatives as in the case of Ukraine. I do not believe that a direct confrontation is desired or enforced. However, because of irrationality there is relatively high risk for developing such a danger. An example of this was the Russian jet shot by Turkey. This of course can have consequences that no one can control. This was a provocation of Erdogan. He naturally and deliberately pursues his own interests as does Israel. And this, of course, may result in an aggravation of the chaos engulfing the others. I believe that we are in the most dangerous situation since World War II, but I do not believe that the leading Germany monopoly capital helm of leading Germany into a war deliberately. Nevertheless, the danger of escalation of the war and the current war regions is great despite everything.

ICP: Does German Communist Party have a concrete action program against aggression of German imperialism?

P. K.: We believe that the real issue is first and foremost to strengthen and expand the peace movement itself. According to our analysis, regarding the issue of war and peace, we are in a position similar to the position the 7th World Conference** of the world communist movement against fascism. Therefore, there is need for broad allies.

Second, we believe that the main thing is to bring together the peace movement with the labor movement and this is a big problem at this moment in Germany. Because, unfortunately, the debate on these issues is on decline in the unions. Moreover, positions supporting the production of weapons, supporting the Federal Army and supporting arms exports are gaining strength in the unions, and in my opinion, this is a huge problem that we need to work on. Therefore, at the same time we are dealing with conflicts that paralyze the peace movement and that we need to overcome.

This is, in fact, a dispute regarding the varieties of imperialism, evaluation of their common features and competition. This issue is strategically very important. However, this debate should not paralyze the movement. Because the real problem is that the awareness against war cannot be converted into action, despite the existence of massive consciousness against war. This makes it easier for the ruling class to validate their aggressive route. It is now once again sharpened with the refugee problem, because it is used to divide the exploited.

ICP: Erdogan is busy with human trafficking these days. What about Chancellor Merkel?

P. K.: Yes, this is human trafficking, it is clear. What the Federal Government is doing is also human trafficking. But the real problem is that it is clear that the root cause of this escape is imperialism with wars, with devastation of nature and with devastation of the roots of life in the Middle East, in Africa and elsewhere. Of course infamy is that imperialism uses the disaster it creates to divide the class in the imperialist centers. To bring refugees against residents, immigrants against non-immigrants is real racism.
In addition, it should not be thought that Merkel government is better than the rest. Absurd. They are only following a slightly different way to impose their interests.

ICP: The wave of refugees has caused major problems for the Federal Republic of Germany. This also applies to the European Union already in crisis. What does the Party think about the solution of the "refugee problem"? Can the ruling class take control of it?

ICP: Your Party took decisions that would deeply affect the party's strategy on the third day of the congress. What does it mean for the future of the party congress?

P. K.: I would like to consider the entire Congress, not only the third day. With the approval of the main draft resolution ***, I believe that we sharpened our analysis and our strategy.
We set off from three vertexes. German imperialism will become more aggressive both internally and externally, and the working class of this country does not have a corresponding preparation for that. Therefore, we conclude that we should concentrate our efforts to strengthen the peace movement, the anti-militarist and anti-fascist struggle. Our special role here, lies in directing these movements against monopoly capital.
On this basis, we determined a direction which includes points that would have weight in our work for the years to come and we have taken decisions concerning the Federal elections that DKP is now in a position to attack. We took decisions related to the 100th anniversary of the October Revolution. We decided to end our position as observer in the European Left Party in order to strengthen the Party. This decision of course has a strategic character. Because it clearly indicates that we want to give priority to intensify co-operation with the communist parties.
On the basis of the class struggle in the coming years, we believe that intensive collaboration with the communist powers, would be decisive as a precondition of block policies with the others. This, of course, requires an alliance policy; of course we should turn to labor movement with social democratic consciousness and to our fellow workers. But if we can create a solid core of communist collaboration, we can do this much better.

NOTES:
* Köbele, intentionally uses Secretary of War instead of Secretary of Defense.
** VII. Conference of Communist International, which gathered in Moscow in the summer of 1935 and the main topic of which was the struggle against fascism.
***DKP gathered its 21st Congress on November 14-15th 2015 in the city of Frankfurt am Main. The decisions that marked the first part of the Congress which lasted 2 days, were admission of DKP as a "Marxist-Leninist party" and the election of a new administration. Patrik Köbele was overwhelmingly elected to the presidency, the decision that determines the party's Marxist-Leninist character was taken with majority vote with about 2/3 of votes. The draft resolution to end the observer status of DKP in the European Left Party was postponed to another date. The Congress was completed on February 27, 2016 on the third day held in the city of Kassel.

Patrik Köbele was born in 1961, in Weil am Rhein, a town close to the Swiss border.
He joined the ranks of “German Socialist Workers Youth" (SDAJ), which was a strong communist youth movement of the 70s, at a young age. He assumed the presidency of the organization in 1989-1994. According to his testimony, he entered the German Communist Party "because he wanted to take the side of the workers," in 1978.