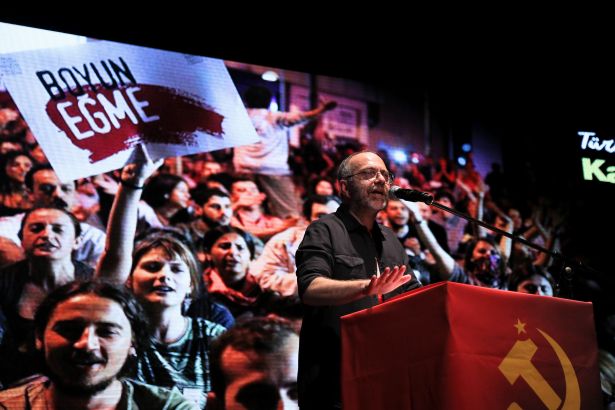 Interview with Kemal Okuyan First Secretary of the CC of the Communist Party, Turkey (KP) on the coup attempt in Turkey. (Revised)

Following is the interview of the soL news portal with Kemal Okuyan First Secretary of the CC of the Communist Party, Turkey (KP) on the coup attempt in Turkey:

SoL: Was the coup attempt surprising for you?

KO: Nothing happening in Turkey should surprise anyone. But more importantly, the possibility of a military coup had been increasing gradually. There are international actors and some power groups in Turkey, who are frustrated by Erdoğan. We have indicated the causes of this discontent several times, we are not making those up. Those are documented, reported facts. Could there be a rule for the capitalists saying there cannot be any conflict within imperialists, no giving away of their own politicians? Recep Tayyip Erdoğan served a lot for the international monopolies, he is still serving them though… But both he himself has made mistakes and also the inner conflicts of the imperialism have been deepened creating various tendencies some of which are not happy with a Turkey with Erdoğan. In that sense, a coup was predictable. Yet obviously there are surprising things about this attempt.

SoL: Some consider everything as a scenario?

KO: It is not a comparison but: I don't understand how certain people take Talat Aydemir’s interventions* seriously but not consider this attempt as realistic? This is because, everything can be visualised today. Image ruins fetishes, yet creates new ones. There is video footage everywhere, those create perceptions of a “fake coup”. Whereas before, everything was on narrative and documents and could be idealized. The fact that this incident has strengthened Erdoğan’s position does not mean it was organised by him or his men. The attempt had some particular critical moments, and if things had been different at those moments we would be talking about quite a different picture.

SoL: For instance, the bombing of the parliament is said to be nonsense and only for show.

KO: The CHP members who were there say most of the MP's, including the PM himself have been saved accidentally from the bombings and the MP's who left the building were opened fire on. Of course it can still be said that this was a scenario including the CHP members; Erdoğan was ready to sacrifice PM Yıldırım, there is no end to it. At some point you could tell everything and anything could proven to be wrong. We can only make predictions by looking at the tendencies. Otherwise each and every incident has suspicious question marks over them.

KO:  Are there standards on “How to make a coup”? Yes it is odd, there are lots of question marks. Yet, this attempt has aimed Erdoğan as its weight. This quite fits the political approach of the “cemaat”** group, which is alleged to lead the attempt. An Erdoğanless AKP! There is a reason behind the operation at Marmaris and the intervention attempts to Erdoğan’s plane in flight. There may be ineptness, but Erdoğan’s part, who are screaming of victory, also had ineptitude. Sometimes history changes accidentally. Apparently it was a plan on Erdoğan. Besides, there is the fact that it has started earlier than planned and that’s why it was an immature attempt. Yet, there are some quite professional dimensions of the attempt. Such as: kidnapping a senior commanding officer from a wedding party at Kadıköy, İstanbul, via helicopter raid...

KO: To indicate that “there is something fishy” in all these, has a point: “ it is impossible that the government was totally unaware of the attempt”. The possibility of a military intervention was something everyone (at least everyone with a political reason) knew, no need for security intelligence. Also, no need to be an intelligence officer to predict that possibility would be increased just before the meeting of the Supreme Military Council (YAŞ). On the other hand, it is impossible to obscure an organised attempt in this extent from the government with a TAF-NIO-Police (Turkish Armed Forces-National Intelligence Organization- Police Department) triangle full of cliques. The exact timing and the plans could not have been known, some groups may have led Erdoğan wrongly and even some of Erdoğan’s people (not himself) could have said “eventually all this would serve us”. But of course all these are normal. This does not make the coup attempt a plot. It was quite obvious that at some moment Erdoğan said “it is over”, just like he had done during Gezi days in 2013. You can tell this from his asylum appeal to Germany.

SoL: Is that true?

KO: It is said that the official information within the EU institutions is in that direction​. Apparently, Erdoğan was desperate when the threat to himself reached its peak while he was on flight and not being able to arrive in İstanbul. His request for permission to land on the Greek island Skyros was something similar. It is said that both of the requests were refused, this is also strange. That type of claims first appear on the US media. Agencies like Stratfor spread these. If those are true it is strange, and if they are not true but only are produced and served by some people from US, it is even more strange. Yet for both of the cases it is obvious that Erdoğan had though times at his Marmaris-İstanbul line.

SoL: Does that mean the West supported the attempt?

KO: We cannot say where the literal refusal of the permission to land for the plane or the asylum appeal come from and the actual details of this issue. But there are two things that I am conscious of, one theoretical, one practical. This attempt has its international links. It is impossible to embark such an attempt without the encouragement or guidance of an US State fraction. This is the theoretical part. Besides there are the first impressions of the US and the EU indicating their opinion of a successful coup and their impartial reaction in the first hours. There was not any support for Erdoğan until the attempt proved to be failing. “ The West stood up to it!”; false! Their words only contain cliche like: stability, democracy, concerns...

SoL: The government also revealed US support under the attempt.

KO: By these claims they expect to avoid US’s intervention to the possible new attempts and they invest in the nationalist ideology inside. Yet these double issues; the genetic code of the islamist-nationalist groups would not fit for a real struggle with US. They’d like to show off their power over 18 year old soldiers not over grand forces. Besides, if the current order in Turkey changes direction, it collapses, dissolves completely.

SoL: Let’s talk about that, those young soldiers seem to have no idea of what is going on. The mock scenario claims are based on this.

KO: Which coup would inform the privates in advance? This is ridiculous! They would say it was an exercise, a terrorist threat. Besides, the attempting group were not acting with their own ideology. That “Cemaat” group had to use a Kemalist discourse in their declaration. Yet the most important characteristic was their views about keeping the people strictly away from everything. They did everything to achieve this. So, it is absolutely normal that they did not tell the soldiers “We are taking over the government”. This attempt seems to be started with the expectation of more support from inside the army than this.

SoL: Then why did they fail?

KO: I believe the first reason is that they couldn't reach the target, which was Erdoğan. Another thing, they had reckoned some departments would join them, and this did not happen. On the other hand the departments which participated is more than we think. But they couldn't depend on the privates, when success was delayed, lower ranks started to dissolve. The critical issue at this point is the very few resistance from the side of the TAF departments which were not involved in the attempt. Apparently most of them wanted to see the progress. This will have serious consequences in the coming days. It is seen that the state has disintegrated once again in Turkey. Erdoğan cannot trust anyone anymore in this structure.

SoL: It is said that some high rank officers had promised the plotters but then entrapped them by not participating?

KO: These types of things are possible and had been seen almost frequently in the mechanism of the coup attempts. We could also say some of the officers acted double sided. I will repeat, we are talking about cliques who had worked together for years. It is very hard to tell one from the other. Keep aside the Erdoğanists and the “cemaatists”, we have seen even the so-called Kemalist officers acted similarly.

SoL: How do you consider the attitude of the capitalist class in Turkey?

KO: On the one hand, the dominant-traditional capitalists from the pre-AKP periods of Turkey are taking what they want from AKP, they have profited in huge amounts. On the other hand, they are not happy with AKP’s extraordinary interventions to the inner balances of capital, but their sources of expressing their concerns have become narrower. In these conditions, prompt reactions and especially holding risky positions in the days of a coup cannot be expected from the grand monopolies. We all know how the headlines of the Doğan media group would have been if the attempt had been successful. In the last five to ten years, Doğan group has changed sides several times but their wealth never stopped increasing.

SoL: How do you consider the opposition’s reaction?

KO: The support provided by CHP and HDP is not about their anti-coup positions. We are also against this attempt, against any action which does not have roots in the people’s legitimate movements and obviously against any pro-American coup! But all CHP and HDP are doing is to seek normalization with AKP, as always. “Victory of, festival of democracy”: disgraceful. This is same for Cumhuriyet newspaper, and it is not something new. Yet it becomes disgusting at times like this.

* An unsuccessful attempt by a group in the military, led by Colonel Talat Aydemir in February 1962. By that attempt Aydemir and his followers were aiming the liquidation of the" pro-May 27, 1960 coup" officers within TAF.