'The communists need to struggle decisively and methodologically againts imperialism' 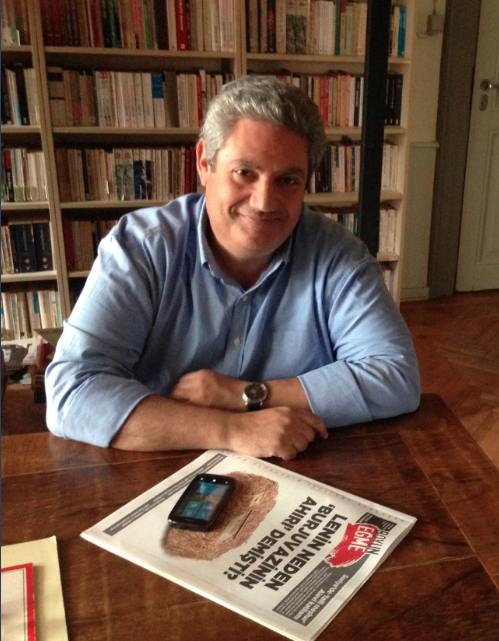 Special interview with Makis Papadopoulos, member of the Central Committee of Communist Party of Greece, responsible for the Ideology Department. (Revised)*

ICP: As a result of the protocol that exists between CP of Greece and CP, Turkey you came to give a seminar on imperialism to the cadres of CP, Turkey. Do you think that the seminar was productive?

Makis Papadopoulos: The seminar itself proves the substantial and fraternal cooperation in the relationship of the two parties. Both the CP of Greece (KKE) and CP, Turkey (KP) have understood the need to take new steps in their theoretical elaboration, on the basis of the principles of Marxism-Leninism, in order to be able to meet the challenges of forming a revolutionary strategy in the contemporary conditions. This seminar was productive because it gave us the chance to clarify the Leninist approach of our party and to debate certain critical points of the topic. At a period which the antagonism among the inter-imperialist centers is intensifying and with NATO getting more aggressive, thus there is a risk of a more general war, the communist parties need to be alert to act in time.

ICP: How do you define shortly the imperialist system of the modern world? Do you think that there are differences in relation to the period of Lenin?

MP: The position of Lenin on imperialism, the reactionary stage of the rotten capitalism is proved to be true today more than ever. Today, the contradiction between capital and labour and the parasitic role of capital is deepening more and more. Certain shareholders-parasites that have no direct relation with the function and the organization of these enterprises they gain enormous profits.

The economic features of monopoly capitalism, which were defined by Lenin, are unified common characteristics of the contemporary capitalist states in the international imperialist system. These unified common characteristics of the capitalist states​ today​ are: the domination of the monopolies, the creation of financial oligarchy, the increase of the importance of capital exports in relation to commodity exports, the competition over the re-distribution of new markets and territories.

In some analyses there is the mistaken approach that Lenin identified imperialism with only a handful of powerful ​imperialist ​​states​, with the so-called big powers. The Leninist analysis does not lead to the mistaken conclusion that only the ​capitalist states ​at the top of the imperialist pyramid implement imperialist policies. Lenin’s approach to the instances of Belgium, Denmark and Italy demonstrate the contrary.

Especially in this modern world we will not be able to understand in comprehension the complexity of the global capitalist economy, if we limit the analysis with the actions of the countries, which are at the top of the imperialistic pyramid. For example, look at the decreasing role of G7 countries in the last 15 years. Moreover, if we try to evaluate the developments in Middle East without taking into consideration the plans and the effects that Turkey, Saudi Arabia and Israel have on the region, we shall certainly make wrong conclusions.

The approach that says that we are today in a new historical stage of “globalization”, due to the expansion of the strength of companies with a multinational shareholder composition and the increase of the interdependence amongst the capitalist states, is also incorrect. These existing phenomena reflect the well-known trend for the internationalization of capital’s motion. However, this tendency does not negate the law of uneven development and the nation-state formation of the capitalist economy. Regarding the rival military camps in the East Mediterranean​ today​ we can easily understand the course of the intensification of inter-imperialist contradictions.

MP: It is not the first time that the USA contributes to bring to the foreground scandals, which strike economically a German company. Besides Volkswagen, there are also the examples of Siemens and Deutche Bank, which clearly give signals of ‘an economic war’ between the USA and Germany. The internationally continuous change in the balance of powers among countries is intensifying the conflicts more and more. At the last 15 years the proportion of the Eurozone in the Gross Global Product has shown a smaller decrease than the USA. As far as the role of Russia and China on the German economy is concerned, USA still being the leading country, has proportionately increased.

Moreover, the USA is supporting the pressure that the French and Italian governments apply on the German government to change the monetary policy. The USA at the same time is playing the leading role on the sanctions on Russia, which strike the German interests. Also, the reaction of the German bourgeoisie on the Transatlantic Trade and Investment Project is of big importance. This project in an aspect aims at an “Economic NATO” while the German and French bourgeoisie suggests that the American proposal is in an aspect ‘a Trojan Horse’. It is clearly seen that in the context of the European-Atlantic imperialist camp, which NATO represents, the inter-imperialist conflicts between the USA and Germany are intensifying.

ICP: Where do you position China in this system?

MP: As we pointed out 10 years ago in our 17th Congress, China has strengthened its capitalist production relations and opened its economy to the international capitalist markets especially after being a member of Global Trade Organization and International Monetary Fund. These tendencies have increased since then. The Chinese economy is motivated from the capitalistic profits and not from the social needs. China, today, bears the characteristics of a strong state of monopoly capitalism, a creditor state and a leading force in the imperialist pyramid.
The last fifteen years the economic force balance between the USA and China, in relation to their proportion to the Gross Global Product and their trade flow, has changed in the advantage of the latter.

China and the interstate capitalistic alliances that it participates in, like BRICS and the Shanghai Cooperation Organization, are competing with other imperialist centers such as the USA and the EU, for the re-distribution of new markets and territories of economic importance. The initiative ‘One Belt, One Road’ (OBOR) is pointing out the attempt of a free trade zone aiming to unite Chine with the rest of Asia, Europe and Africa. The formation of the New Development Bank (NDB) and Asian Infrastructure Investment Bank (AIIB) is an answer to the American dominance in the World Bank and IMF.

After the retard in the Chinese economy, the state has proceeded to a restructure of the state industry sacking six million workers, while the access of the people to free social supplies such as health and education has been limited. The developments, in the total prove the domination of capitalist relations of production in China.

ICP: Do you think that in the near future USA and its allies shall declare a war to China, Russia and their neighbour countries? In this context, how do you evaluate the summit of NATO that will take place this summer in Warsaw?

MP: We cannot foresee that. But we can tell for sure that the over-accumulated capital that cannot be turned into a profitable investment is increasing in the modern international imperialist system. None of the imperialist centers can easily and effectively secure a bankruptcy of any bourgeois state or a large banking group. On this economic context the conflicts among imperialist centres for the control and the re-distribution of markets, energy sources and generally of territories with big economic significance, such as the sea-based hydrocarbon sources in East Mediterranean and the land-based sources in Middle East. These conflicts penetrate today the international negotiations among the imperialist centers about the borders and the sovereignty rights of the countries in Eurasia, and the confronting of big issues such as the Cyprus, the Kurdish and the Palestinian issue.

The temporary compromise between the USA and Russia in the wider region is quite fragile, if we also take into consideration the new possibility of the USA to export energy. Still, the military exercises of NATO suggest the preparation to a new​ imperialist​ intervention in Libya and the strengthening of its role in Syria.

The fortification of NATO’s fleets in Aegean Sea, the new steps towards the fortification of NATO in Baltic Sea, the activation of the antimissile shield in Romania and the Summit of NATO scheduled to take place in Warsaw this summer with the topic, enhance the ‘stability’ beyond the borders of NATO, are indications of the escalation in the aggression of Euroatlantism.

The ally forces of USA such as Turkey and Saudi Arabia seem unpleased with this temporary compromise between the USA and Russia, and they contribute to the further intensification of their conflicts.

ICP: What kind of possibilities do the competition and the contradictions among the imperialist countries open do the leading parties of the working class?

MP: The communists need to struggle decisively and methodologically so that the working class does not follow the bourgeois class, not get trapped and not conciliate with one of the competing imperial alliances. Only in this condition, can they utilize the contradictions among the imperial centers for the benefit of the peoples’ interests, to topple with a revolutionary action the bourgeois class in each country. The everyday political struggle for people’s rights and needs to deter the imperialist war, should not be detached from the main revolutionary task, the goal of workers’ power. At the same time, we should strengthen the coordination as the communist parties and the working class movement need to act in common in an anti-monopolist – anti-capitalist orientation. In this orientation, the close fraternal cooperation of the CP’s in Turkey and Greece gains a special significance. The common declarations that we have made since March 2011 show the way to organize the struggle against NATO, the bourgeois classes of the two countries from the aspect of the people’s  interest.

* Within the interview some parts of the answers of Comrade Papadopoulos, which needed some corrections resulted from translation, have been revised after the apt notice from the CC of KKE. We entirely take the responsibility and apologise for any undesirable results originated from our translation. ICP