'The antidote for nationalism is the class identity' 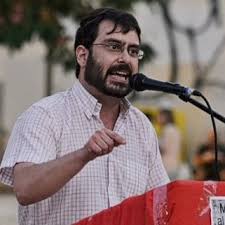 Special interview by soL with  Astor Garcia, the GS of the Communist Party of the People of Spain (PCPE)

soL: Wellcome to İzmir. How were the activities on the 100th anniversary of the October Revolution in your country and what were its repercussions?

Astor Garcia: We organized a number of activities in several cities in Spain on commemorating the 100th anniversary of the October Revolution. It started with the activity in Madrid on October 7 which aroused great interest among Party members, the Communist Youth Collective (CJC) and our sympathizers. The other activities are taking place in the regional capitals.

We published a special issue of Nuevo Rumbo which is a publication of our Party. Prepared in September by the Party's Central Committee, this issue discussed claiming of the achivements of the October Revolution, analyzing the Revolution and taking the struggle of the Bolsheviks for socialist construction as an example for today.

soL: How do you express the timeliness of socialism?

The loss of social rights, worker's rights and gains following the dissolution of the socialist block as a result of the counter-revolutionary attack confirms this proposition. The working class once again faces the severe consequences of capitalism.

soL: How does your Party analyze the issue of Catalonia? How do you observe the future of this issue?

AG: One cannot deny the complexity of the situation in Catalonia. It is a serious crisis in the development of the state with historical, political and economical roots. It would take too long to explain it here but we could summarize today's situation. The small and middle bourgeois sections in Catalonia, faced with the consequences of the economic crisis and especially the contradictions of Spanish capitalism owing to the escalation of capitalist crisis, saw an opportunity to manipulate the national feelings and identity of the Catalan people and ventured to use it to start a bargain in reinforcing their own economical and political status within capitalist Spain.

During the last 40 years this situtation has persisted. Yet until now, it had been an issue which would end up in a compromise based on unity and struggle. In fact, there are many instances in history when the Catalan nationalist bourgeois forces have supported the Spanish government.

The current plan and program implies the dissolution of certain legal and economic features of the regions and the lifting of barriers amounting to a national centralization. The working class and the popular classes find themselves dragged into this challenge where the two sections of the bourgeoisie try to prevail against each other in the sharing of surplus value and exploitation.

We, as the Communist Party, point out that Catalan nationalism and Spanish nationalism mean to regulate capitalism in different ways rather than demolish capitalism itself. In view of this fact and analysis, we have openly called the working class and popular classes of our country and of Catalonia to create our own alternative.

We explained the necessity to seek the independance of the working class in order to construct a country for the working class. These are the main guidelines of our political activities. We oppose nationalism that poses a serious threat and has inflicted great pain to the people of Spain in history. We stand against the escalation of both Spanish and other nationalist movements with these argument.

soL: How do you see the European Union (EU)? What is your line of struggle against the EU?

AG: The EU is a bourgeois union whose main aim is improve its position in the rivalry among imperialists. It is a union of imperialist states and it promises nothing in favor of the European people and for the people around the world, as it can be clearly seen in Libya, Syria, Iraq.

From the very begging, before the European Economic Community (EEU) had turned into the EU and even before that, since Spain joined the EEC in 1986, we have firmly opposed to be a part of this union.

Today, as the EU glosses over the policies of the Spanish government against the working class and its anti-popular policies that aim to intensify exploitation, since it serves as a guise for these policies, our position is reinforced.

We observe that EU is in a crisis. Beyond doubt the alternative in favor of European peoples is for each member to leave this union of imperialist states and this is clearly what we need to fight for. We are seriously challenging and struggling against the political position which seems to be critical towards the EU and the euro but proposes reforms, the position which claims that EU may be turned into an instrument in favor of the people but is incapable of understanding the fact expressed by Lenin that a union of capitalist states in Europe would only be reactionary.

Besides giving false hopes to popular masses the EU institutions are also used in distorting history and spreading anti-communism. In this respect we insist on immediately leaving the EU by constructing a socialist economy in our country in favor of the working class and the popular masses.

soL: Could you tell us about your policies on the immigrant problem and on the issue of unemployment?

AG: In our daily political activities we always try to connect strategic issues to tactical issues. Capitalist forces, the capitalist media and the capitalist government, at times when unemployment dramatically increases, especially as it's happening at this moment in Spain as a result of the crisis, hold out that having a job and creating employment is important.

However, our perspective is stable, we don't attribute an abstract meaning to employment. Very basically, when talking about reclaiming work, we don't say that people should have a job, shouldn't be unemployed, but we refer to employment in conditions denied by capitalism, enabling workers and popular masses to have rights, to realize a project of life providing self-sufficiency in a way that will enable them to achieve their expectations from life.

On the other hand it should be pointed out that even though unemployment figures in Spain are phasing out, this is achieved by ruining working conditions. Just as defending the October and the Bolshevik Revolution signifies, we say that it was possible and it is still possible for a worker to have a profession and a job and take part in organizing social tasks while welfare conditions are enhanced rather than worsened. We put the socialist model against capitalist development; the model where workers are free from the pains they suffer under capitalism.

Our political activity on the immigration issue is based on one idea; we explain that most of the immigration that we see in Europe today is caused by the interventions of the European imperialist forces towards other countries.

If the European imperialist forces had not intervened and plundered African and Asian countries and had not manipulated their governments, the phenomena of immigration would be far from its present form which has been shaped in recent years.

soL: What is the main slogan of your youth activities?

AG: Since September the CJC is carrying out a campaign named 'The Youth is Organizing the Attack'. In this sense, our intention is to show the working class youth that it is not only the time to resist against capitalist government's attacks but also it is the time to organize and struggle for new gains. This is true for gaining new rights both in education and in work.

For instance, in recent years many rights and gains have been abolished under cover of the crisis. The CJC conducted an intense activity within the student movement and made an important organisational achivement. In fact, they not only organize 'The Youth is Organizing the Attack' campaign but meanwhile they play a complementary role in the Party's campaign carried out with the slogan 'A Country for the Working Class'.

soL: How do you analyse the parties such as Podemos and what is your stance regarding them?

AG: We analysed the establishment and development of the phemonenon of Podemos and explained it again and again at great length. Podemos could be identified in general as the Spanish version of new social democracy.

It was an organisation founded by capitalizing on the protests known as 'the movement of the furious' in Spain in 2011. It gained ground among the discontentedness which had arisen not with a working class character but rather as the reaction of the petty bourgeoisie and middle strata against the proletarianization they were facing.

Podemos realized itself as an agent institutionalizing this discontentedness in the perpetuation of capitalism. When conditions necessitate, they are ready to replace and fulfill the mission of PSOE, the ex-social democrats existing since the 70's. The PSOE is now in deep crisis and is facing an uncertain future precisely because of its dilemma of addressing the working class with an abstact discourse while practically perpetuating the system of exploitation in recent years.

No matter how much Podemos uses new tools and adopts a more young and fresh style and no matter how much they use a discourse closer to the previous social democrats, their parliamentary activities and their policies indicate that, just like their role in maintaining the continuity of PSOE in certain localities, despite their first impression of bringing about change they are in the last instance sustaining the capitalist system in Spain.

To be precise, let me give a classical example; we may say that Podemos is exactly the SYRIZA of Spain. Just as SYRIZA chose the financial forces when it had to decide between the popular masses and the financial forces, Podemos would also make such a choise since it has the very same character.