Workers of the world, unite! 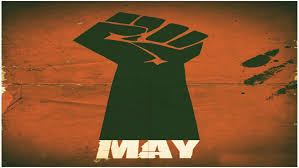 Statement of the European Communist Initiative on MAY 1st

The Secreteriat of the European Communist Initiative released a statement honouring the 1st of May as being an international day of proletarian solidarity and struggle of the working class and all workers."

The statement called "the working class, the workers to strengthen their mass mobilizations and intensify the class struggle, against capital, its political representatives and the anti-people political line against NATO and the EU and the other imperialist unions"  all over the world on the 1st of May.

The full statement is as follows:

As communist women and men, we are proud of our ideology, our values and ideals, our struggle for social progress, for the rights of peoples, for the liberation of humanity and its emancipation from the yoke of capitalism.

In our days, the working class and the laboring masses all over the world are direct witnesses and first victims of the consequences of the deep economic and social crisis of the capitalist system, which principally hits them and also other people's strata.
Capitalism leads to the worsening of working conditions, wage cuts, unemployment, insecurity and poverty on the rise and the intensification of measures of repression against class resistance and is responsible for imperialist wars and military interventions, presented under false and deceptive pronouncements, for control of markets and raw materials and chiefly the energy resources.

This fact is even more evident today. The imperialist war and aggression generate bloodshed and poverty, from which enormous numbers of migrants are attempting to flee.

The Communists play the leading role in the struggle against imperialist wars and defend the principle of internationalist struggle, work for the unity of the working class, regardless of their nationality and religion, and for the common struggle concerning labour and social rights.

On May 1st, the Communists call the working class, the workers to strengthen their mass mobilizations and intensify the class struggle, against capital, its political representatives and the anti-people political line against NATO and the EU and the other imperialist unions.

The Communists strongly reaffirm the vanguard role of the working class as the creator of all wealth, and we stress the social and historical necessity to overturn capitalism via a revolution and build a social system, where the wealth belongs to those who produce it, and the political power belongs to the great majority of the people: the working class and its allies.

We state openly and firmly, that our goal is a society with no exploitation of man by man, no imperialist wars, no hunger, no unemployment, nor poverty.

We are fighting for a society, based on the workers' power, the socialization of the means of production, the scientific centralized planning and the real and substantial democracy for the working masses, a society that will satisfy the contemporary needs of the people.

We express our internationalist solidarity to the workers in struggle, wherever they are fighting for their rights and their future.

Long live the workers' May 1st!

Workers of the world, unite!"