'We must respond decisively to capital’s offensive!' 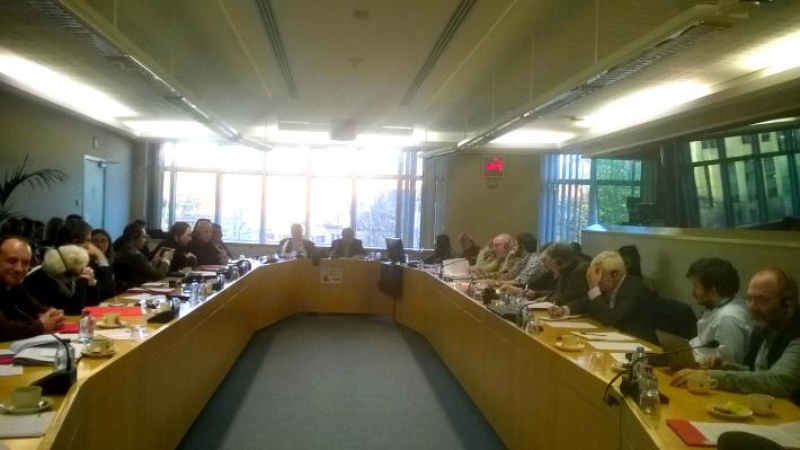 Motion of the Plenum of the European Communist “Initiative”

We must respond decisively to capital’s offensive!

Seven years after the outbreak of the capitalist crisis, in conditions of sluggish rates of economic growth and concern of the bourgeois staff about a new crisis, the forces of capital are intensifying their offensive against the working class and popular strata and promoting the so-called capitalist restructurings.

The results are painful:
High levels of unemployment, abolition of collective labour agreements, reduction of salaries-pensions, harsh taxation, the expansion of flexible forms of employment, the increase of the age of retirement, privatizations, the commercialization and downgrading of health, welfare and education services, the intensified downgrading and destruction of the natural environment etc.

It has been demonstrated in practice that the goal of capitalist recovery being promoted by bourgeois, liberal and social-democratic forces, opportunist forces, goes hand in hand with the policy of abolishing workers’-people’s rights and intensifying exploitation.

Labour-people’s struggles are developing in many countries in the framework of these difficult conditions. The bourgeoisie is worried, seeks to impede the development of the class struggle and any challenge to its dominance, resorts to authoritarianism and repression. Measures to restrict the right to strike, to limit trade union and political rights are being implemented all across Europe.

The forces of capital are strengthening anti-communism. The anti-communist poison is being used in particular against the youth, through distortions and anti-historical sermons by the school system, the mass media and other bourgeois apparatuses.

Measures to outlaw communist ideology and CPs and to impede their activity in many ways are being implemented in Ukraine, Kazakhstan, in the Baltic states, in Eastern and Central Europe.

Under the pretext of “combating terrorism” the concept of radicalization is being incriminated, i.e. the struggle for emancipation form bourgeois ideology, the struggle for social progress and the overthrow of this rotten system of exploitation, capitalism.

The Communist and Workers Parties that participate in the “Initiative” call on the working men and women, the popular forces, the youth to denounce anti-communism and to respond decisively to the multifaceted offensive of capital, strengthening their organization and struggle against the antiworker-antipeople measures, developing a mass militant movement with the contemporary needs of the people as its criterion, for the protection of the environment.

The working class, the working people have the strength to fight for their just cause on the path of coming into conflict with capital, the imperialist unions and their power.

The communist men and women will be in the frontline of this struggle. The experience of capitalist barbarity highlights the necessity of the socialist society, the abolition of the exploitation of man by man.