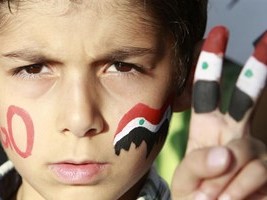 "For the past eight years, the people of Syria have defended their motherland, decisively and heroically. They have manifested a remarkable and honourable resistance, that hasn’t ceased for one moment in these years, despite the unmeasurable suffering they have been dragged into. It has already had its place in the great history of humanity.

As the following communist and workers’ parties, we denounce in the strongest way possible the imperialist intervention of US and its allies, that has created one of the greatest tragedies of the 21st century. We have no doubt that those who have forced people to live this tragedy for the interests of the big capital, for the profit of the exploiters, they will be accounted for their outrageous barbaric crimes before history. We have no doubt that the enemies of the people will get their dirty, filthy hands out of Syria.

We express our deep and unconditional solidarity with the working people of Syria, and their vanguard communist parties. In support with Syrian people, we appeal for a solidarity mission in Damascus.

We demand the end of imperialist aggression and we fully respect the independence, full sovereignty and the integrity of the national territory of Syria. We emphasize once again that the decision regarding the future of Syria belongs only to peoples of Syria.