Solidarity with the people of Sudan and the Sudanese CP! 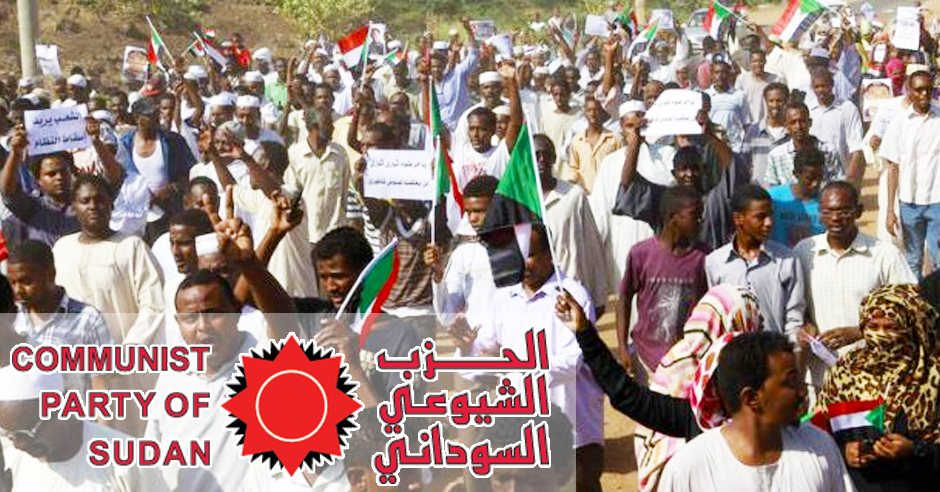 The appeal for the intensification of international solidarity with the Sudanese CP was responded by communist and workers’ parties yesterday. On the same day, the official spokesman of the CP Fathi Alfadl was arrested by the security forces of the regime.

On January 2, the Secretariat of the Central Committee of the Sudanese CP had issued a statement on the popular uprising against the regime in Sudan. Thousands had marched on New Year’s Eve through the capital Khartoum chanting "The people want to overthrow the regime", "Freedom, Justice, the revolution is the people’s choice". The march was called by the Professional Alliance of trade unions, marked the 14th day of continued mass protest actions against the dictatorial regime.

According to the statement, the peaceful march met with excessive force by the security forces with live ammunition. Reports spoke of several casualties and scores of injured as snipers targeted protesters from the rooftops. Arrests included two leaders of the Professional Alliance, and the chairman of the United Unionist Party. The Sudanese CP said that ‘as a result of the victories achieved by the people’s unity, and the advance of the protests to reach all the corners of the country, cracks have started to appear in the regime, proving that the beginning of the end has started.’

Following the mass uprising, twenty parties which were part of the government and were allied with regime declared their withdrawal from all posts with the regime. Citing the brutality and the killing of innocent protesters by the regime, they called for Albashir’s resignation, the dissolution of the present government, and respect to the basic freedoms and democratic rights. The Secretariat of the CC of the Sudanese CP issued two appeals on 31st Dec. and 1st January, calling for ‘the further continuation of the mass actions, based on the unity of the opposition forces and their declared demand: the overthrow of the regime, its dismantling and liquidation’.

In its statement, the Secretariat of the CC also pointed to the ‘ongoing conspiracies by internal and foreign forces to steal the struggle of the people and abort their revolution’. It called on the masses ‘to stand firm and unite around their aspirations for a bright future based on equality, the rule of law and independent participation of the working people in the decision-making process and implementation’ and affirmed its commitment ‘to the principles embodied in the democratic alternative adopted by the opposition’.

Following the statement of the Secretariat of the CC of the Sudanese CP on 2 January appealing for 'the intensification of international solidarity', several communist and workers’ parties issued a common statement on 9 January expressing support for and solidarity with the struggle of the Sudanese people ‘against the dictatorial regime, for democracy and social progress’.

The international solidarity statement said, ‘The regime is implementing an economic policy dictated by the World Bank and IMF which has ruined the country and turned the lives of the overwhelming majority of the population into one of misery, hunger and poverty. Being a true servant of world imperialism and regional reaction, the regime sold the country’s fertile lands to foreign capital, evicted its local owners, opened up the country to the CIA and Mosad’s activities, hosted the CIA’s largest station in Africa, joined the US AFRICOM forces, and sent troops to Yemen as part of Saudi Arabia’s invasion.’

The communist and workers’ parties called for 'the immediate and unconditional release of all political detainees', declared support for 'the peaceful mass protest actions aiming at the overthrow of the dictatorial regime, its dismantling and the establishment of a people’s democratic government that paves the way for the completion of the tasks of the national democratic revolution’. The parties saluted the role played by the Sudanese CP in the present popular uprising and supported its efforts ‘to build the broadest possible alliance to topple the dictatorial regime’.

On the same day of the international statement, in Sudan, scores of communists and democratic activists were arrested, including Fathi Alfadl, member of the Political Bureau of the Sudanese CP and its official spokesman. Alfadl was arrested in Khartoum by the security forces on the morning of 9 January. The Sudanese CP expressed its deep concern for Alfadl’s safety and health, underlining that several members of the CC of the Sudanese CP are still in detention after their arrest by the security forces during recent weeks.

In its statement on 9 January, the Sudanese CP reminded that Alfald had headed the party delegation in the last International Meeting of Communist and Workers’ Parties that was held in Athens in November 2018 and called for 'urgent international solidarity action to demand the immediate release of Comrade Fathi Alfadl and all political detainees'.