The response of the Communists of the Balkan to imperialism 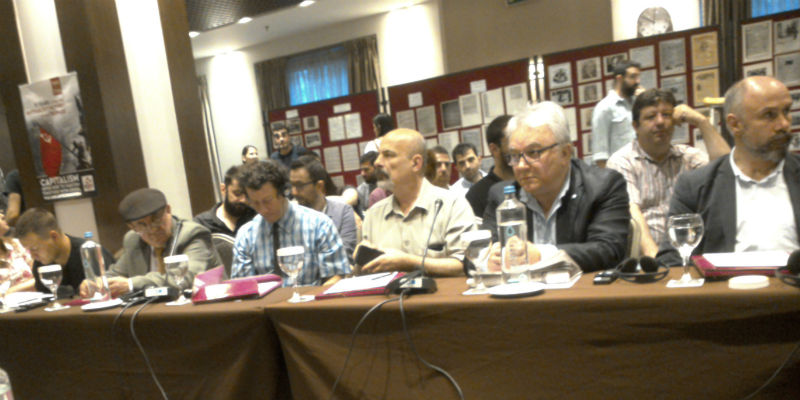 Balkan meeting of Communist and Workers' Parties was held in Thessalonica with the participation of eleven CWP's.

With the call of the Communist Party of Greece (KKE) the meeting of the Communist and Worker's Parties (CWP) of the Balkan, titled: "The dangerous role of the EU and ΝΑΤΟ in the Balkans, the monopoly antagonisms that bring imperialist war, refugees, nationalism and the response of the peoples" was held in Thessalonica on 15th of May.

The General Secretary of the CC of the KKE Dimitris Koutsoumpas opened the meeting with his speech.

"...This year, the organization of the Balkan communist meeting coincides with a major historical anniversary, a milestone in the history of the people's and labour movement of Greece, the harsh class conflicts of May 1936. In honouring the militants, those unbowed by the class struggle, it is necessary to highlight the strength of the working class and its position in society, as the class that has the historic mission to overthrow capitalism, to abolish the exploitation of man by man and build socialism-communism, the society that has the satisfaction of the needs of all the workers at its centre. By studying history, we draw lessons for today that show us the way and can make the labour and communist movement more capable in the struggle against the exploitative system, the bourgeois class and its political representatives, every kind of reactionary, fascist force that make their appearance in the region, to struggle and reinforce the front against social-democracy and opportunism..." said Koutsoumpas.

The General Secretary stressed "the intensification of the aggressiveness of the bourgeois classes" in the region and "the implementation of harsh anti-people policies and measures that attack the workers" as well as the increasing aggressiveness of the imperialism by the EU and the NATO. He also stated that the developments in the Balkan region should be assessed  together with the developments in the wider region covering Ukraine, Iraq, Libya and particularly with the continuing war in Syria.

Koutsoumpas concluded his words as follows:

"...The struggle for socialism is what lends strength to and can support the daily activity of the CPs in the labour-people's movement, in any case it is no accident that the class enemy focuses its attack on socialism, with slanders against socialism and anticommunism. There must be a strengthening of our common struggle against the poison of anti-communism, against the persecutions carried out against CPs and communists. We must strengthen the common struggle against fascism, racism and chauvinism-expansionism.
In this direction, utilizing the 100th anniversary of the October Socialist Revolution which we will honour next year in 2017, we can take steps towards the organization of joint events about the history and contribution of the communist movement in the Balkans."

After the opening speech the meeting proceeded with the contributions of the participating Parties. The CWP's of the Balkan shared their opinions on how to develop cooperation and joint struggle against NATO and imperialism by being organized within the working class.

Within the programme of the meeting there was also a gallery of the photos of the grand uprising at Thessalonica in May 1936.