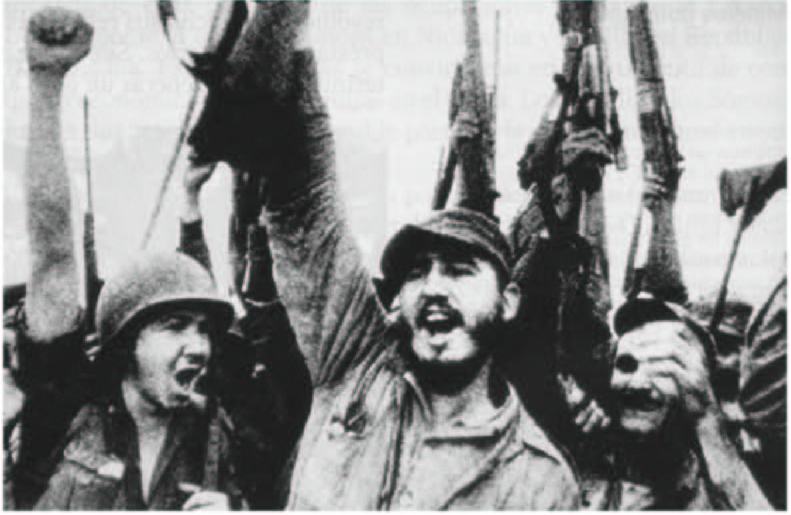 CP USA, Greetings and an Appreciation of the Cuban Revolution, on the occasion of its 60th anniversary

On January 1, 2019, the Cuban people will celebrate the 60th Anniversary of your revolutionary triumph.  Millions of struggling people around the world, including in our own country, the United States, will celebrate with you...
In spite of all difficulties, Cuba’s revolutionary government played an enormous role in the people’s struggles far beyond its borders.  National liberation movements all over the world were inspired and invigorated by the Cuban example. Above all, the Cuban role, lasting over several decades, in the ending the fascist apartheid regime in South Africa was a gift of the Cuban Revolution not only to the South African people, but to all of Africa and to humanity.
When, at the end of the 1980s, and culminating in 1991, the socialist governments of the USSR and the other Eastern European states collapsed, Cuba was plunged into another dangerous crisis.  By the creative response of the Cuban government, party and people during the “Special Period”, Cuba was able to overcome the new danger.
Cuba’s socialist, revolutionary solidarity with the poor nations of Asia, Africa and Latin America, epitomized by its work in the fields of health care, education and even sports, have continued and expanded in spite of all dangers and challenges from imperialism.  Even in wealthy capitalist countries such as the United States, our struggles for a better life have taken inspiration from the example of the Cuban Revolution and Cuban socialism.
Although many of the great leaders who brought the Revolution to power, including unforgettable figures like Fidel Castro, Che Guevara, Vilma Espín and many others, have now passed from the scene and into history, their living monument, and that of the Cuban Revolution, is to be found in the achievements of the Cuban people and in the hearts of struggling people everywhere.

See the link for full text

CP of Greece, Message from the KKE on the 60 years of the Cuban Revolution

The KKE sends you its warm comradely greetings on the occasion of the 60th anniversary of the victory of the Cuban Revolution January 1st 1959.

The Cuban revolution, the first socialist revolution of the American continent, just a breath away from the powerful imperialist power, the USA, constituted one of the most significant events that marked the 20th century.

It confirmed the vitality of Marxism-Leninism and proletarian internationalism. It added personalities such as Fidel Castro, Che Guevara, Camilo Cienfuegos, Vilma Espin, Frank Pais and others to the pantheon of the militants of the working class and revolutionary movement. It inspired the struggle of the oppressed and exploited around the world, it answered back to fatalism, to compromise with the capitalist world order.

It created a new type of state, a state of workers and farmers that not only managed to ward off the counter-revolutionary attempts but also laid the foundations for the satisfaction of people's needs, for social rights that could not and cannot even be imagined by the deprived and despised of your continent. It supported the national liberation movements of the peoples selflessly and with sacrifices...

At a time marked by the scars of counter-revolution and the overthrow of socialism in the USSR and other countries where the Communist and revolutionary movement continues to face serious difficulties, under strong pressure from the bourgeois class and opportunism, the Cuban Revolution is one of the milestones that can and must be utilized to defend the history and the contribution of the Communist movement, to strengthen proletarian internationalism, the struggle for socialism.

CP of Turkey, Message of celebration for the CC of the CP of Cuba from TKP

Sixty years ago, the Cuban people, having Fidel and his comrades as thier leadership, had presented a great gift to humanity. We celebrate the 60th anniversary of the Cuban Revolution with great excitement.

Cuban people have fought back against the isolating and suppressive attacks of imperialism and have proven to be an example for the people of the World who have been in the search for their revolution. They have shown the miracles of an egalitarian order and solidarity against the rotten capitalist society.

Today, this revolutionary society is building its own future with full participation, making an independent road map, demonstrating the true democracy. The Communist Party of Turkey has full trust to the will and the dediction to socialism, of the Cuban people in this process.

We convey our comradely greetings to the Cuban people and their vanguard, the Communist Party of Cuba.

The Central Committee of TKP

See the link for full text in Turkish.

Philippines CP [PKP 1930]. SALUTE TO THE 60th ANNIVERSARY OF THE VICTORY OF THE CUBAN REVOLUTION

The Partido Komunista ng Pilipinas (PKP-1930, the Philippine Communist Party) salutes the 60th anniversary of the victory of the Cuban Revolution which is being celebrated today, and sends warmest comradely greetings to the Partido Comunista de Cuba (PCC), the government of the Republic of Cuba, and the revolutionary people of Cuba...

On this occasion, we reaffirm our commitment to constantly promote awareness of the truth about Cuba, and to continue working for the widening and strengthening of the solidarity movement with Cuba in our country. The PKP-1930 will continue to stand in solidarity with the Cuban revolution in the struggle to frustrate and defeat every imperialist attempt at intervention and interference ; in the struggle against the criminal US blockade ; and in the struggle for the return of the Guantanamo naval base to Cuban sovereignty and territorial integrity.

Finally, we wish every success and more progress and prosperity for Cuba, and the best of health to PCC First Secretary Raul Castro Ruz, President Miguel Diaz Canel Bermudez, and to all the office-bearers of the PCC and the government of the Republic of Cuba, as well as to the entire revolutionary people of Cuba.

See the link for the full text.

CP of Chile, The CP's letter to Raúl Castro

CP of Chile sent the fraternal greetings, on the occasion of the 60th Anniversary of the historic triumph of the Cuban Revolution, which opened the way for the first socialist revolution in America...

Along with thanking once again, through you, for the immense solidarity with the government of Salvador Allende, then with the struggle of the people of Chile to put an end to the fascist dictatorship of Pinochet, for the welcome of thousands of exiles, for the contribution to the training of Chilean doctors and the disinterested help in the face of catastrophes that our country has suffered, we greet you with great appreciation, in this New Year of 2019 and in this 60th Anniversary of the Cuban Revolution.

See the link for full text in Spanish.

Today, January 1, 2019, we celebrate the 60th anniversary of the triumph of the Cuban Revolution… The revolutionary process that began on January 1, 1959 has gone through good and bad times, through victories and defeats, has had successes and mistakes, but, above all, has had the capacity of criticism and self-criticism that Marxism demands . It has been a process of building people’s power, organizing life in neighborhoods, in workplaces, in schools and colleges, a cultural revolution that gave to the people the access to education and books, which took care of the welfare of its people, granting  universal and free public health.

From the Paraguayan Communist Party, we greet fraternally all the Cuban people, for their dignity and courage to build their authentic homeland, and for their unprecedented solidarity with all the peoples of Latin America and the world, highlighting he words of Martí: "Homeland is Humanity".

See the link for full text in Spanish.

The National Secretariat of the Communist Party of India sends revolutionary greetings to the heroic Cuban people and Communist Party of Cuba on the 60 glorious years of the victory of the Cuban Revolution over the US-Batista dictatorship in 1959. The Party also congratulates the Cuban people and the government of Cuba led by the Communist Party for the construction of socialism facing all kinds of intimidations and onslaughts from the US imperialists...The CPI National Council wises all success to the advancement of Cuba extending its sincere acknowledgement to all the efforts of PCC First Secretary Raul Castro Ruz, President Miguel Diaz Canel Bermudez, and to all the office-bearers of the PCC and the government of the Republic of Cuba, as well as to the entire revolutionary people of Cuba.

The Communist Party of Ireland sends revolutionary greetings to the Cuban people and to the Communist Party of Cuba on the sixtieth anniversary of their revolution...Today Cuba is a beacon of hope and an example to tens of millions of oppressed people around the world. It is a shining light in the provision of free health services and free education to all levels, free from domination by imperialism. It has laid the basis for full and true equality between women and men, between all the different races within Cuba.... It is the duty of the working class internationally to offer the maximum solidarity to the Cuban people. Victories for the Cuban working class are victories for the international working class and for all oppressed peoples.

Portuguese CP, Central Committee of the Portuguese CP salutes the Cuban Revolution on the occasion of its 60th anniversary

Saluting the Cuban Communists and through them the Cuban people, the Portuguese Communist Party reaffirms its deep and constant solidarity with Cuba and its Socialist Revolution, renewing its commitment to continue to fight […] against the campaigns, threats and attempts to interfere, in particular the criminal US blockade against Cuba; to defend the Cuban people’s right to freely decides its own path; and to contribute to the strengthening of the ties of friendship and solidarity that unite the Portuguese people and the Cuban people.

Expressing our confidence in the Cuban Revolution and its capacity to face the most complex challenges with remarkable determination and coherence, we wish the greatest successes to the action and struggle of the Communist Party of Cuba and reiterate our desire to continue deepening the relations of friendship and cooperation between our two parties.

See the link for full text in Portuguese.