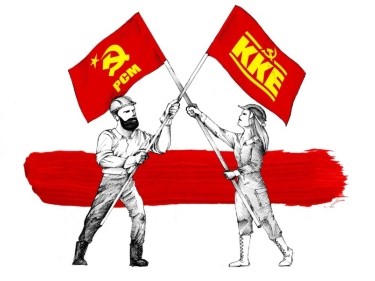 KKE and PCM issued a joint statement dedicated to the reinforcement of the struggle of the communist movement and its revolutionary regroupment.
ICP, 5 September 2018
The Communist Party of Mexico (PCM) and the Communist Party of Greece (KKE) strengthened their bilateral relations during the 6th Congress of the PCM convened in Mexico City in August. On September 1, the two parties issued a joint statement treating actual political developments and the situation of the international communist movement.
At the beginning of the statement, the two parties highlight their conviction in Marxism-Leninism and put forward that the sharpening of the fundamental contradictions within the exploitation system demonstrates the necessity to overthrow capitalism and replace it with socialism-communism. The intensification of inter-imperialist contradictions are interpreted as a risk for a generalized imperialist war. Accordingly, the statement denies any tolerance towards bourgeois governments either in conditions of imperialist peace or imperialist war. Both parties devote all their forces to strengthen the class struggle, standing at the side of all oppressed people against the anti-people policies of bourgeois governments and imperialist unions, giving as an example the "wall of shame" erected by President Trump against Mexican immigrants.
The statement prescribes that both parties are struggling for strengthening the unity and the struggle of the international communist movement in a perspective for its revolutionary regroupment at a national, regional and international level. For the PCM and KKE, this task demands the decisive strengthening of the Communist Parties within the working class and an essential dialogue between them in order to adopt a single revolutionary strategy at the expense of positions for "pro-people management of capitalism" and "intermediate stages".
It is clearly expressed that both parties reject any support or tolerance towards bourgeois governments, including the so-called "left and progressive" ones. They fight against the social democracy, the so-called "socialism of the 21st century", the EU, NAFTA and NATO. On the other hand, they continue to fully support the revolutionary traditions of the communist movement in this current period of transition from capitalism to socialism. They defend the Cuban revolution and express their solidarity with the struggles of the people of Venezuela, Colombia and the peoples of Latin America in general.
The joint statement ends as follows: "We continue our struggle with faith in the just cause of the working class and its historical mission. We send our warm militant greetings to the working class, to the people's forces in our countries, all over the world. PROLETARIANS OF ALL COUNTRIES UNITE!"

See the link for full text in English, Spanish, Russian and Arabic.